If you were a teen in the 1990s, chances are the single “I Swear” made by All-4-One still strikes a major chord in your heart. Going back to the times of the CD walkman, the talented R&B-Pop princes, who have sold 22 million records around the world, will always be recognized from their Grammy-winning cover song that has been relived in 21st-century movies Just Friends and Despicable Me 2.

LIB Mag recently spoke with lead singer Jamie Jones about All-4-One’s newly released Christmas album, being together two decades and the upcoming, 20-song record to show for it.

What is the first thing you would like readers/fans to know about All-4-One?

Jamie: We never broke up! We tour around the USA, Europe and have a great fan base located in East Asia. We took a break from recording to reconnect with our audience; our last album was No Regrets in 2009 with Concord Records. Although it was not strongly promoted, No Regrets is my favorite of all time.

Tell us about the upcoming anniversary album.

Jamie: Since our 20th anniversary happened (1994-2014), we are giving fans an early 2015 album to celebrate. We are like family and have been together for each of those 20 years. We all grew up in church and have the same beliefs; all our dads are in the military. When we got together – since day one – we instantly knew we had the potential to be together this long.

My personal favorite song on the album is a special  “I Swear” duet with John Michael Montgomery, the original country singer of that song.  The albums is 20 songs for 20 years and some of the best work we have ever done. 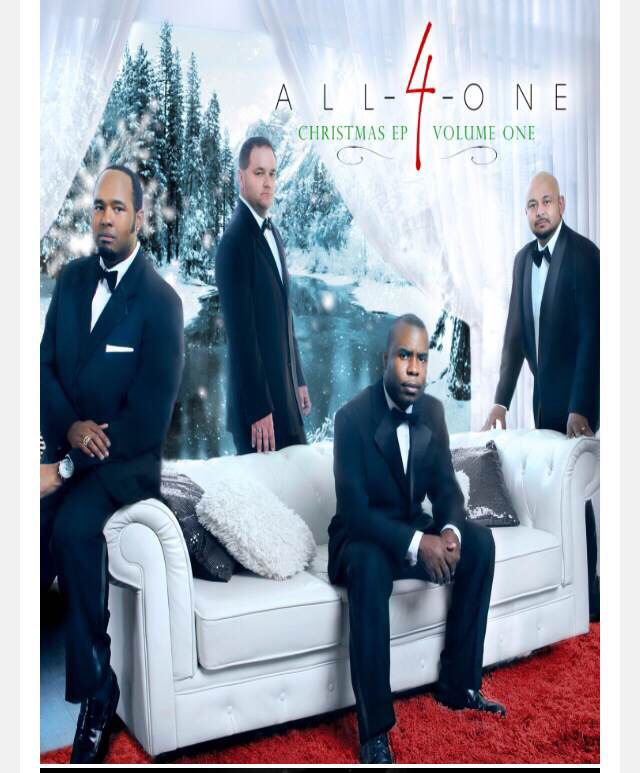 A prelude to the anniversary album: All-4-One Christmas EP available on Itunes.

Two decades as a group is truly amazing – and pretty unusual these days! Do you guys argue, disagree, maybe throw a chair.. ever?


Jamie: we have never had a knock down, drag out fight. We have broken up fights between OTHER groups, but it was never the case between us. As passionate as we get sometimes.. we still love to sing and hang out together.

Do you get stopped in the streets to sing “I Swear”?

Jamie: (laughs) I think every artist wishes they have a record like that. I mean, even Despicable Me 2 has minions singing “I Swear” at the end. We go to so many countries and can’t even speak the language, but people know how every word to that song. It’s incredible how it has touched lives in so many ways. People have a story for that song; almost everyone does. I was barely 18 when we started, but now I have my own kids – and we are constantly meeting fans who introduce their children to our music from 1994!

Having been around before the age of YouTube, do you think the industry has changed for better or worse?

Jamie:  Music is an ever-moving circle: Everything old becomes new again. Technology in music is convenient but not always better.  When we were coming up, we had to pay our dues; we sang everywhere from weddings, birthday parties etc to make a reputation for ourselves.  New artists are getting discovered off YouTube and have no experience performing or knowing how to work a crowd! It is a shortcut that has made some entertainers miss out; They get one shot, a single, and that’s it.  In our beginning, a record label was wiling to try again and make a second album even if the first one didn’t pan out. A lot of these artists have the potential to be great, but are not given more than one shot or opportunity due to digital media.

That being said, what do you think of America Idol and related reality shows?

Jamie: Whenever anything comes easy, it’s not worth having: That goes for any occupation from singing to stockbroking. If you start washing the floors and are suddenly promoted to CEO, you won’t know how to survive. I was a landscaper before i was a singer and saved the money to go to talent shows and keep on gong with music. You learn as you go. The people who go very far on those shows have the old school mentality. They have reputations within their hometown and are doing their best to be discovered.