You are at:Home»#WeAreLIB»51Fest As Presented by Women in the World & IFC Center
By: Kelly M. Coffey on July 11, 2019 #WeAreLIB, Around the Web, Art & Music, Entertainment, Movies, Nightlife, Recent Events, Travel and Leisure 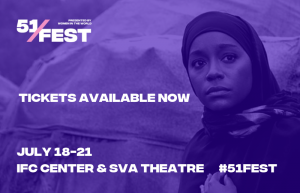 51Fest, presented by Women in the World and IFC Center, is fast approaching! Celebrating the voice, vision and stories of the female majority through compelling screenings and conversations, all by or about women, the first annual 51Fest will be held July 18-21 in New York City.

We have added some amazing new speakers to the lineup, including actor Kathleen Turner for Raise Hell: The Life & Times of Molly Ivins, along with actor and comedian Mario Cantone (of Sex and The City fame) as the moderator for Otherhood.

You may have seen some of our great press this week in The Hollywood Reporter and Deadline, however this line from Women and Hollywood made us smile:

Discover an amazing group of stories by and about women at 51Fest, July 18-21.

👉 Remember we also have a 51Fest Pass for $350 ($300 for IFC Center Members), which includes priority access and reserved seating to all festival screenings and discussions.

WOMEN IN THE WORLD SPOTLIGHT: SUPERMAJORITY
Fri, July 19, 7:00 PMJoin Tina Brown and Supermajority co-founders Cecile Richards and Ai-jen Poo in a conversation about their new activist organization and its mission to put women at the center of the debate and the forefront of change. Plus a sneak preview from Yoruba Richen’s new documentary And She Could Be Next.