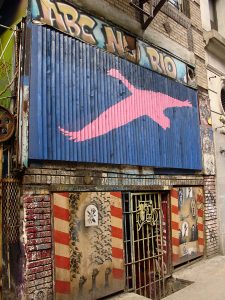 Their front. Run by volunteers, everything is created by artists.

After living in the safety of a college dorm, life anywhere else was a very rude awakening. Being an adult is never something that came naturally to me seeing the amount of trial-and-error trauma-drama I had to go through before I learned oh-so-many valuable life lessons in my youth. I lived at home with my parents, then in a college dorm, then a weird, scary transitional summer of staying with randos before we found an apartment in the Bronx.

I can’t tell you how many times I asked myself why I didn’t take the other road, but way too late for all that. I signed a year lease for a three bedroom apt in Castle Hill, Bronx from July 2001-July 2002. This neighborhood was most definitely at that time neglected and not very safe. While I’m fairly certain we were never actually robbed because nothing went missing, strangers definitely made themselves comfortable in our apartment while we were gone for a little too long. There were drug dealers and animal abusers living in the same house. The living room closet was actually a black hole that may have once been a staircase. When we opened the door, there was a tiny little square and seriously – a black hole that consumed to oblivion anything that fell into it (or was thrown down it, like brand new glass shower doors… another story for another day).

Goodbye, possessions. It was nice owning you.

So, I got a dream job at The Strand Bookstore on 12th & Broadway and it became my life. I submitted requests to work daily and worked open to close daily for as long as management approved. There was a maximum and toward the end I was inducted to a dorky hall of fame for most worked because by then I was saving every single penny for the move to Salt Lake City. Working there from open to close gave me a lot of time to read books, meet authors, brainstorm my stories, and make a whole bunch of new friends. 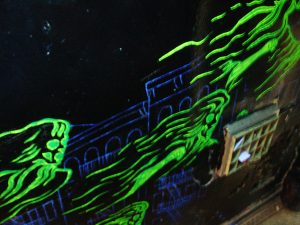 OooOooOoooO Ghosts in their halls.

This was the year I hated my roommates, it was super chaotic growing pains, lots of lies and stupid immature shallow shit that followed me well into my forties (shame on me), and so escaped with work, writing, and photography. I read so many books, got back into graphic novels and spent a lot of time walking around the city. Really have zero recollection who told me about ABC No Rio – most likely Tim, possibly Freddy, but any of the other basement guys could’ve just as well, but I’m so glad somebody pointed me that direction. The third floor was a black & white photo developing lab for kids like me who missed having access to such an invigorating hobby so very much. It was a piece of being a safe, protected college student again, a skill I could continue to both practice refining and immerse myself in for pure the pure joy factor.

The people I met were very much into an anarchic way of life, raw-foodists committed to living fully self-sustainable lives, anti-globalization people fighting for civil rights, making their own clothing, growing their own food, building their own structures like a greenhouse for their garden and whatever shelving was needed for the library. We were survivalists, activists, curious people who sought a place because we may have felt we didn’t belong anywhere else.

The second floor was divided; on one side, a basic kitchen was used for the non-profit Food Not Bombs NYC. It was very much grassroots work – volunteers only, never any money discussed or exchanged. We harvested, cleaned, prepped, cooked, packed, and distributed food to anyone who held out a hand. We did the bulk of the food prep and distribution on Sundays, but if we had food that could be stored for a night or two, we’d volunteer to go out other days, as well.

A non-fiction resource library existed on the street side of the second floor. From floor to ceiling, nothing but print materials: Books, newspapers, magazines, journals, VHS tapes, CD’s were just starting to become the most reliable way to save data, and anything else that people donated and thought worthwhile. History, philosophy, art, politics, anarchy, punk-rock, survival guides, memoirs and autobios, documentary VHS tapes available to watch in-house only. I mean, as a librarian I thought I was a protector and defender for knowledge, but the people who ran this resource library were true warriors. They made it accessible for someone like me who was so young and naïve, people answered my questions, invited me to events (like exhibit openings), and refined my skill on how to adapt.

ABC No Rio changed my life when I had no idea I needed that. They never wholly embraced me, but I always thought that was part of the deal for us: learning balance, independence, and self-sufficiency. We were learning how to exist in our new reality post-911 while rebuilding alongside it. It’s hard to explain, it wasn’t a warm place with the hippie crowd; these were people who knew the ugly side of the world and wanted to improve it, but didn’t always know how. We came together to learn, teach, create, and pay it all forward. We came together to change and I feel like I did that. Some of these people shared their struggles with me so their pain wasn’t all for nothing, that maybe something decent could come of it if I turned out to be the type of person who did anything in return.

I hope I have and still do.