From this moment forward you are no longer an extra in your life story. You are the lead!

Bravo! To those who deconstruct the concept of life taught to them so to rebuild lives of joy and value, in pursuit of their dreams, not others’ expectations. Guided by a blind compass, we find the courage to expand our understanding of all life has to offer, to make something from nothing.

aLICe aMPLIFIED! is a celebration of our stories and the grit and grace it takes to grow into the best versions of ourselves and build solid foundations for future generations. To take a passion and turn it into a career, to expand, to construct, to take flight!

Welcome to the Big aLICe Brewing Barrel Room at Industry City in Sunset Park, Brooklyn and our first ever art gallery and exhibition.

aLICe aMPLIFIED! is coming to its final daze at the gallery. Coordinating and curating the show has been an extraordinary learning experience, a lot more work than I realized, and still a sense of I can’t believe this exists and I’m doing this lingers every time my eyes land on the gallery wall. Not just for myself, but for the contributors who are just as excited to be part of it.

Putting together the gallery in and of itself is a fun story, one I plan on sharing in a different post (currently titled Making of a Curator but subject to change), and describes what happens when a left brain logical thinker works with a right brain creative.

I’d never sold a print from a gallery exhibition and two of my friends bought framed photographs. The milestones steered me straight to brainstorming the second show, now materializing itself slowly, constantly scribbling ideas as they pop up. If you haven’t already, come see some of the most gorgeous pieces before they’re gone (some already are).

Since the opening in May, Emily Callaghan’s Untitled multi-color piece has drawn many compliments, including by an art collective co-founder who recently published a call for submissions for a paper exhibition. He was fascinated by Emily’s piece because it’s painted on cardboard, which he gushed about his passion for cardboard canvases and asked me to encourage Em to submit (which I absolutely did). When I asked Emily to submit, she offered this piece and knew as soon as I saw it, it would root the entire show. When I asked what inspired her, she expressed it came from that moment of wanting to create with whatever materials that were available in her surroundings, resulting in something, for me as a fan, so unpredictably calming, fun, and creative to get lost inside.

The first Emily piece I saw was the blue & green movement one, she gifted it to the Big aLICe fam and someone included a pic of it in the nightly shift report. It wasn’t until I saw it up close I could appreciate its beautiful ambiguity, see what it might be made of, catch patterns and flows in the scene. 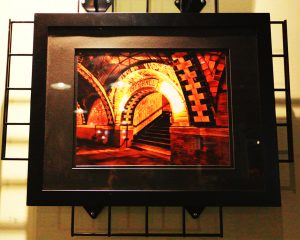 Edward’s piece City Hall accompanied by my Brooklyn johnny pump photograph seemed to get noticed by many natives, people from the neighborhood who share their stories of what it looked like 15 years ago. Edward Coffey, my father, is the person who instilled everything adventurous and inspired me to pursue photography. I was around eight or nine years old when my dad blew my mind describing his love for a photograph. I can’t remember his exact words, but he told me, “There’s something special about capturing that one moment in time and having it forever to look back on. I can always look at that moment.” I wound up printing, matting & framing this particular photo of City Hall last November for his birthday, it was only serendipitous it had a place in this show as a possible representation of his reinvention of self. 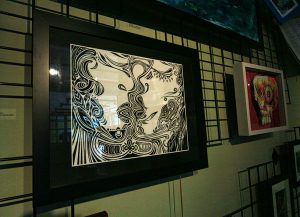 What can I tell you about Luisa Baptista besides how phenomenal her artwork is and how she’s blowing my mind? Her newest mural can be found at Joey Bats Café in the Lower East Side of Manhattan. Again, I introduce to you a woman who twelve months ago did not have a mural in the Bronx, or had been honored in her hometown’s central municipal building for a different mural, and now has a third original at a popular café in New York Fucking City, expanding her reach even further than she thought capable. She jokes that in her time of hibernating she was inactive, but I never really thought that, she was always dreaming of what she is now doing. I’m honored to know this woman, she’s one of my favorite artists ever and look forward to seeing what Luisa does next. 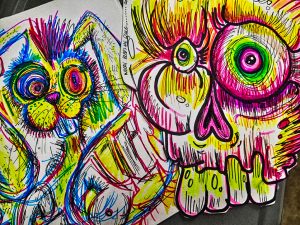 These stunning drawings were left at Big aLICe Brewing Company, LIC, Queens location. There was a drink & draw group chilling one Saturday evening, I remember their faces and watching them create, but  left them doing their thing. It was a surprise to find these at the end of the night while cleaning and knew these would be best framed in shadowboxes and make thoughtful gifts to the gallery. They really brought a lot of vibrancy to the walls, both in color and mood. I think the details are mesmerizing and their eyes conjure (or exude?) an electrifying energy.

I’ve known Rosa Huffman-Mandala since we were young college kids. She comes from a very artistic family and it was this past holiday season I discovered her talents with the glass jewelry she now creates. Rosa sent out a social media post a 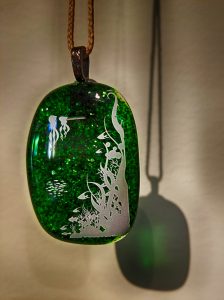 round the holidays with her jewelry catalog. I bought several colorful designs and gave them all away as gifts. Every person who opened them melted when they saw her work, obvious to us Rosa creates with heart and soul, and it shows when people wear her necklaces or earrings. I even went and bought more pieces a few months later because I didn’t have one for me (and the others were gifts). It only seemed natural to include my favorite piece in the show (without her consent, as a surprise) because it adds something unique with the light it emits.

Even after I had collected all these amazing pieces for the show, I felt something was still missing. Some of this was lack of action on my part, didn’t make the time to pull together everything I wanted, but also just knew it needed another medium. That’s when Jim Richards came into the taproom minding his own business, but not long before we got to chatting about his work, which sounded most definitely like nothing I’ve seen recently and sought out.

Jim brought in some of his infra-red photography sometime before the gallery was finished, the sharp details and stories behind those images resonated, but Jim submitted different hand-made pieces for the show. He used a liquid emulsion to develop images of nature onto organic materials he found. So, if you look at the photo, what you might see is a piece of wood he found and treated, with an image of a tree he took  developed on top of it. The levels of texture and depth from this process run deep if you are someone who enjoys reading between art’s blurred lines. 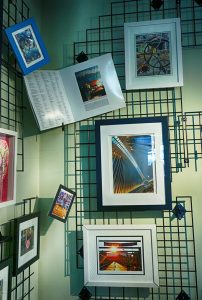 I spent a great deal of time gazing at Jim’s art the six weeks or so these specific pieces lived in the gallery because he built the entire presentation as a book, accompanied with his artist statement (the stories) of how these came to exist – engaging his spectators by challenging them to delicately turn the pages to create new stories for these random, strange images, full of mystery, wonder, soul.

Jim has since swapped out the storytelling pieces for the infra-red series. Once again, he built the frames, one of which he bordered with compartments of soil and somewhat reminds me of a photographic bento-box. I guess that makes no sense, but exactly why you should just come see it for yourself. It’s a surprise nobody has fought to showcase his work; his art is a gift, skill and trade not anybody could produce, and a reason in a long list of why it feels like such an honor to curate Big aLICe’s rotating art gallery.

I now have my work cut out for me as I embark on the journey of becoming a curator. While there’s no shortage of artists and works, there is only so much space and time, so very little of it, and it’s always in a constant state of flux. I am thrilled by some of the newest artists I’ve met, excited to introduce them to you, and can’t quite emphasize how much I look forward to growing into this role. All for fun. 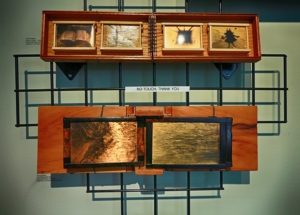