You are at:Home»Art & Music»Bret Michaels at the Emporium: Rock, Nostalgia and Gratitude!
By: Brittany Montague Kelly on April 11, 2013 Art & Music

A red bandana, sleeveless black tee with a skull and cross, ripped jeans… In true rock fashion, famed musician and reality TV celebrity, (Celebrity Apprentice, Rock of Love, Life As I Know It,) Bret Michaels, performed Sunday night, April 7th, at the Emporium in Patchogue. This was the newest Long Island stop on his “Life Rocks Tour,” played before a packed room of hyped up devotees.

“I want to thank you for 26 awesome years and for allowing me to do what it is I love to do,” said Michaels, as he ran on stage and opened the show. After the falling fog cleared and the band hit the first note, the onlooking crowd cheered even louder at the moment they were finally able to see Michaels. 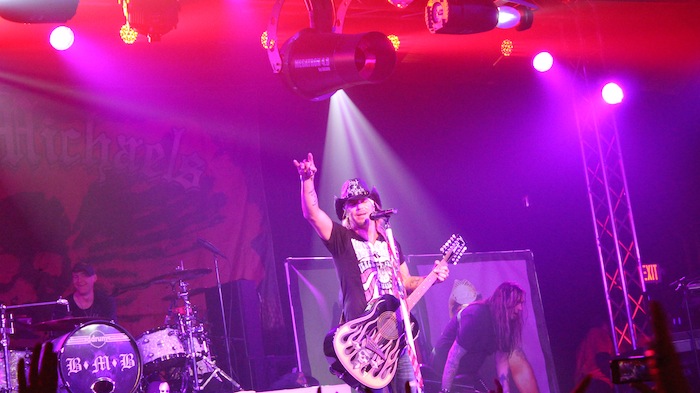 Since the 80s, Michaels, lead front man of the of the rock band Poison, has remained humble and very grateful for his fans. This was apparent throughout the show, as he kept taking moments to engage audience members, touch hands and get down on one knee at the edge of the stage.

Bret Michaels’ fans came out in full force and people of all ages, who have followed his career over the years, could be seen dispersed throughout the Emporium during the night. Perhaps the youngest fan among the mix, was six year old Marie Kikks. Kikks was accompanied by her mom Athena. Athena said Marie first became a Michaels fan three years ago when she met him at the Westbury Music Fair. After walking up to her and saying, “Hey little rock star,” mom Athena said her daughter has been a Michaels fan ever since.

“I want to thank you for 26 awesome years and for allowing me to do what it is I love to do,” said Michaels, as he ran on stage and opened the show.

Once the show got underway, during Michaels’s rendition of “Sweet Home Alabama,” the rock star could be seen mouthing the words, “I love you baby,” to a fan who had been reaching their hand out to get his attention.

Perhaps it is that same devotion and fan appreciation for which four long time friends of middle school love him. Becky Ryan, Erin Jancus, Alycia Hoenes, and Katie O’ Connell of Islip, all wore matching pink cowboy hats and bandanas. “It’s our tribute to Bret,” said the friends, who, like many others over the years, feel Michaels’ music make him the great person he is and that regardless of Michaels very recognizable styles, it is not just about his looks. That said, many other fans at the concert opted to pay homage to Michaels’s signature 80s image, by sporting big blonde hair and an abundance of makeup.

Michaels performed several Poison hits throughout the night, including “Every Rose Has a Thorn.” and “Something to Believe In.” His latest album, “Good Songs and Great Friends”, due to be released in May, features Joe Perry of Aerosmith, Ace Frehley Ace Frehley of Kiss and other “artists turned friends” that Michaels has made over the years.

Both photos and videography are credited to Anthony Parris. You can find him on Twitter @SirrAP_the_DoN.