You are at:Home»Art & Music»Cancelling the Apocalypse: A Review of ‘Pacific Rim.’
By: Amanda Ferris Kelly on July 15, 2013 Art & Music

In a sea of remakes, adaptations, and sequels, it’s rare to find a well-directed movie with an original story. However, Guillermo Del Toro’s ‘Pacific Rim’ is a well-crafted flick that both entertains and tugs at the audiences’ heartstrings. At first glance, it seems as if it will be another ‘Transformers’—a mindless tale of action and giant robots with no substance whatsoever. Yet from the very beginning, Del Toro sets out to turn the audience’s expectations on their heads.

The film opens with a kaiju attack on San Francisco. At first, everyone thinks that it’s just a random fluke, but the attacks didn’t stop and Earth quickly realized that this was just the beginning. The kaiju are giant aliens who are attacking from a portal located deep beneath the Pacific Rim, and in order to defeat them, different countries from all across the globe must put aside all former rivalries and alliances in order to pool their resources together to fund the Jaeger Program. The Jaegers, which were named for the German word for ‘hunter’, are giant 250-feet tall robots, which are controlled by two pilots who are connected by a neural bridge so that they can mimic the right and left hemispheres of the human brain. This in turn allows the Jaegers to act as a second skin for the pilots, who are sent out to fight the kaiju. While things are going great for the humans at first, the kaiju are relentless in their attacks, and that’s when the story truly begins. 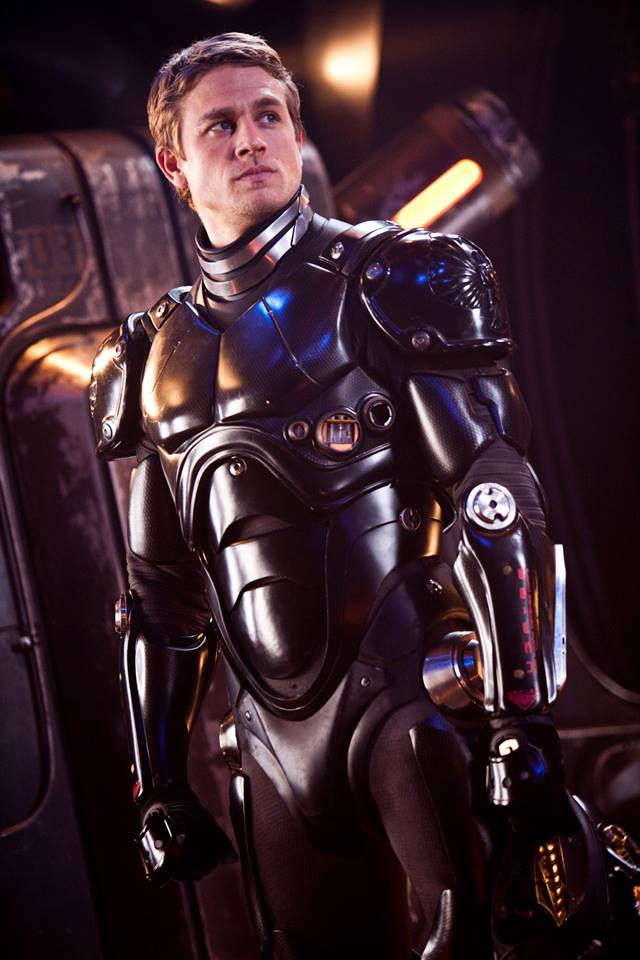 One of the film’s three main characters is Raleigh Beckett (Charlie Hunnam), a skilled Jaeger pilot who is partnered with his brother Yancy Beckett (Diego Klattenhoff) to control the Gipsy Danger. Sadly, he’s forced to watch his sibling die after a particular vicious kaiju attack that leaves their Jaeger torn up almost to the point of no return. Raleigh has both physical and emotional scars too-not only did he have to feel his brother die vie their neural link, but he also suffered ill-effects after having to pilot the Gipsy Danger solo as well.

Fast forward five years, with the Jaeger program being decommissioned, much to the dismay of Marshall Stacker Pentecost (Idris Elba), who thinks it is folly to focus on ‘the Wall of Life’ instead. With only four remaining Jaegers at his disposal, Marshall Pentecost seeks out Raleigh in Alaska to talk him into piloting the Gipsy Danger once more.

“Pentecost’s rousing speech urging his pilots to ‘cancel the Apocalypse’ will have audiences cheering and is a great morale booster before the thrilling final fight towards the end of the movie.”

When Raleigh returns to the Shatterdome in Hong Kong, he meets Marshall Pentecost’s adopted daughter Mako Mori (Rinko Kikuchi), a young trainee Jaeger pilot who is driven by a desire to get revenge on the kaiju for killing her entire family but is being held back by Pentecost’s fear for her safety. Due to the fact that the Jaeger pilots must be ‘Drift-compatible’—i.e., their personalities and fighting style need to match up, Raleigh defeats all the newcomers—until Mako. Despite Marshall Pentecost’s misgivings, he allows his daughter to become the Gipsy Danger’s co-pilot.

Over the course of the movie, we see Mori truly shine. Del Toro gives her the traditional ‘Hero’s Journey’ and we watch her go from having a panic attack the first time she ‘Drifts’ with Raleigh to a capable co-pilot in her own right. Del Toro makes his second lead character just as complex, layered, and interesting as her male counterparts.

Marshall Pentecost, who is the third lead, also shines brightly in the film. Underneath that cool exterior lies a secret, but when the time comes, he does not allow that heavy weight to stop him from piloting the Striker Eurekea, which is the fastest Jaeger in the world, to do his part in trying to save the world. The audience sees his grief at losing the Cherno Alpha and the Crimson Typhoon as well as his pride at watching Mako and Raleigh pilot the Gipsy Danger and defeating the kaiju in the battle of Hong Kong.

Meanwhile, Raleigh’s arc is one of redemption. He turns from bitter and scarred ex-Jaeger pilot who is taunted for ruining the ‘program’ and running away by Chuck Hansen (Robert Kazinsky), the son of Herc Hansen and second co-pilot for the Striker Eurkea to a respected pilot once more. He also comes to terms with his brother’s death and winds up being an excellent mentor to Mako as well.

The action heats up with Marshall Pentecost devising a plan to take the fight to the portal at the Pacific Rim in the hopes of defeating the kaiju once and for all. Pentecost’s rousing speech urging his pilots to ‘cancel the Apocalypse’ will have audiences cheering and is a great morale booster before the thrilling final fight towards the end of the movie.

While fans of Japan’s mecha-based animes will adore the action-packed fight scenes between the Jaegers and the kaiju, it is the human elements in the story that will draw casual viewers to the theaters. If you’re sick of the same re-hashing of tired old stories that Hollywood insists on churning out week after week, make sure you see ‘Pacific Rim!’ It’s a great summer movie that has it all: action, drama, and a hint of romance too.  So make sure you go before it leaves theaters and cancel the Apocalypse with Marshall Pentecost, Raleigh Beckett, and Mako Mori!

To look up movie times at a theater near you, please visit Fandango or Movie Fone. Also, be sure to visit ‘Pacific Rim’s official site, Twitter page, and their Facebook Page as well.