It’s happened, folks: New York Comic Con 2014 beat out its San Diego partner with the biggest pop culture convention of the year.  This year’s event brought a special Avengers 2 screening, a Q&A with the crew of animated hit Archer and the original cast of The Karate Kid.

Whether you’re a diehard Star Wars fan or a binge-watching popular TV junkie, New York Comic Con has something for all the different folks – and their different strokes. Never been to Comic Con before? Well, pop culture fans.. we have to say you are missing out. The LIB Magazine staff ventured to NYCC, armed with cameras and cosplay, to bring you a precise rundown of exactly what went on behind the doors of Jacob Javits Center from Thursday, October 9 to Sunday, October 12, 2014. 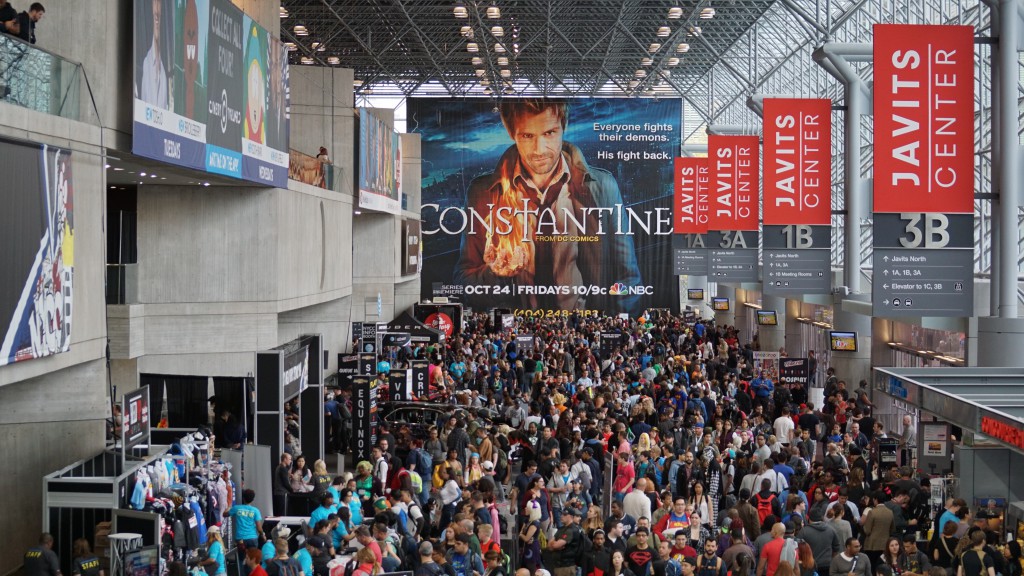 Though a weekend crowd of more than 151,000 fans (including George Clooney) might appear overwhelming to some, it does not take long for the spirit of Comic Con to instill with hundreds of comic book artists such as original Wonder Woman artist Adam Hughes, authors, anime illustrators, TV producers and the cast of AMC’s The Walking Dead.   Comic Con is an opportunity for viewers to network with their favorite network television headliners and producers.  Entertainment panels housed exclusive press screenings that had fans lining up by 6am, hoping to participate in special Q&A sessions with television guests comedian Aisha Tyler, The Walking Dead Executive Producer Greg Nicotero, an autograph session with XENA: Warrior Princess Lucy Lawless  and hundreds of other entertainment and literary personalities who shape the immense world of comics, anime, TV and cinema that engrosses the young and old on an hourly basis.  To say the very first comic heroes of the 1930s are “back in style” is inaccurate; while comic and anime has indeed become trendy, these artists and producers use such artistic influences as a part of their daily lives.  Events such as NYCC simply bring the art of pop culture and classic comic books to the mainstream crowds willing to tackle a rather controversial, 10-hour ticket line (or bid hundreds on Ebay) in order to reap the weekend’s celeb-studded festivities. 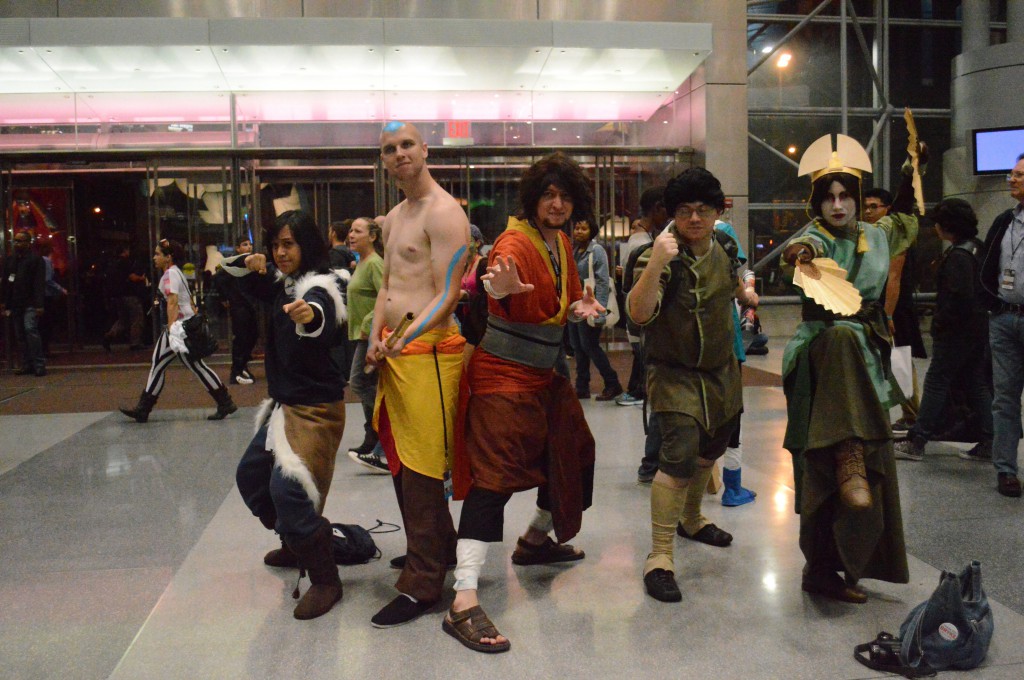 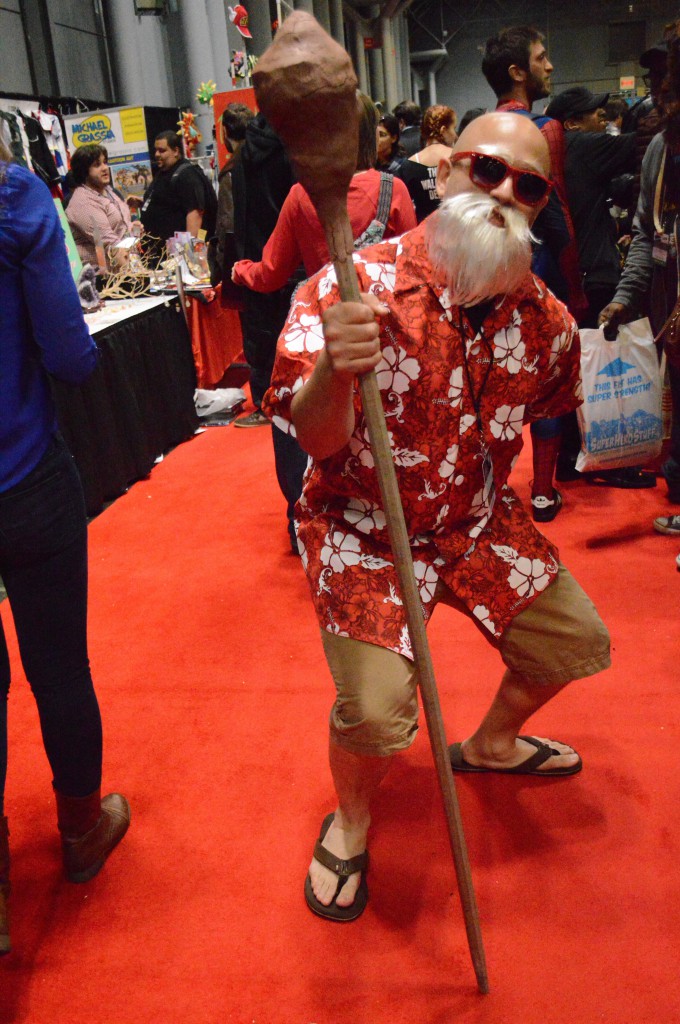 The best part of our Thursday was the panels.  LIB talked with Z Nation writer and co-creator Craig Engler and early 2000’s heartthrob Tom Everett Scott. The panel was great and we got to understand what really sets Z Nation apart from zombie shows and popular movies such as Resident Evil and Dawn of the Dead. They even gave the audience a sneak peak of this week’s all new episode. When LIB asked Scott what his weapon of choice would be in a real zombie apocalypse he told us “my character uses a hammer and gun sometimes.  I’d have to stay away from a gun since it would be too loud and attract more zombies. I would have to go with something long and sharp.” Engler also shared his exact weapon of choice – a medieval type of mace – telling the audience, “I asked for it for Christmas”.  Intrigued? Check out Z Nation on Fridays at 10pm on SyFy. 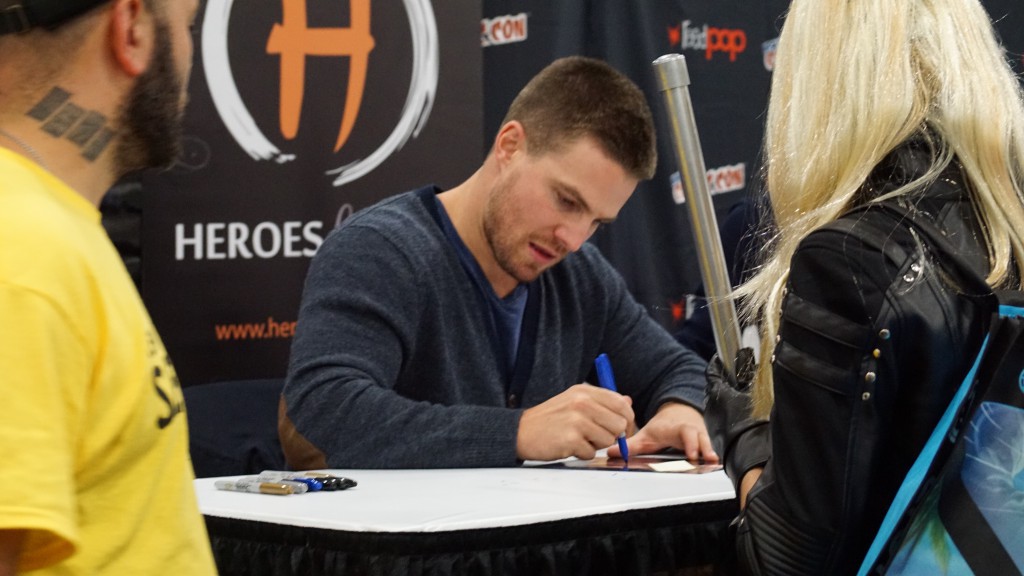 LIB also met and interviewed great writers, illustrators and cover artists including Michael Golden and Luke Ross.  At Comic Con, the right wing of Javits Center became Artist Alley – a dozen aisles filled with ethereal anime prints, black-and-white drawings and up-close digital comic drawings composed by legendary and upcoming artists working side by side. Purchased prints were gratefully signed; some artists even offered life drawings made for cosplayers, families or gentile fans.  The coveted Mark Hanna sketched a classic Joker for two fans in about seven minutes flat (even Batman would be amazed). 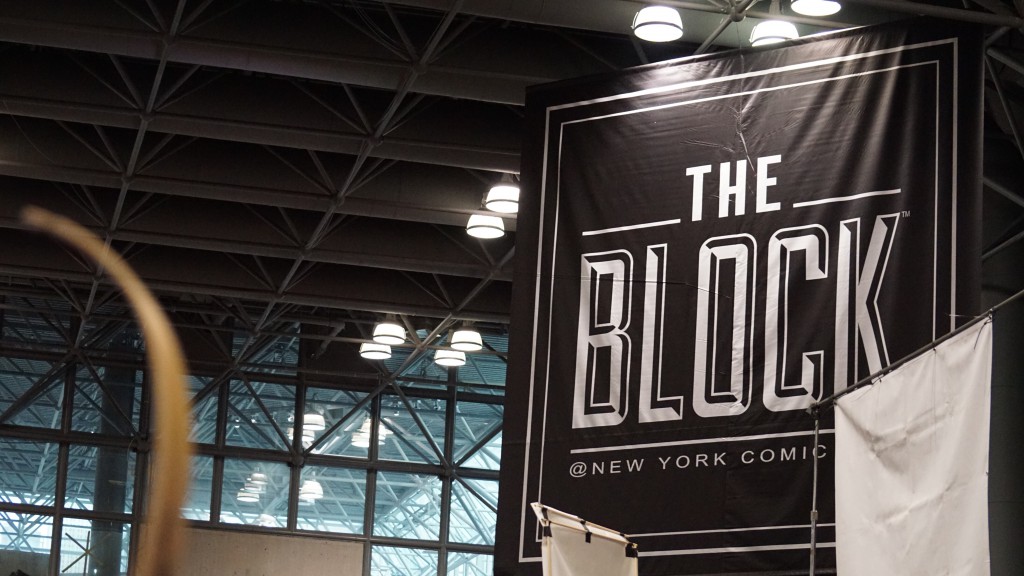 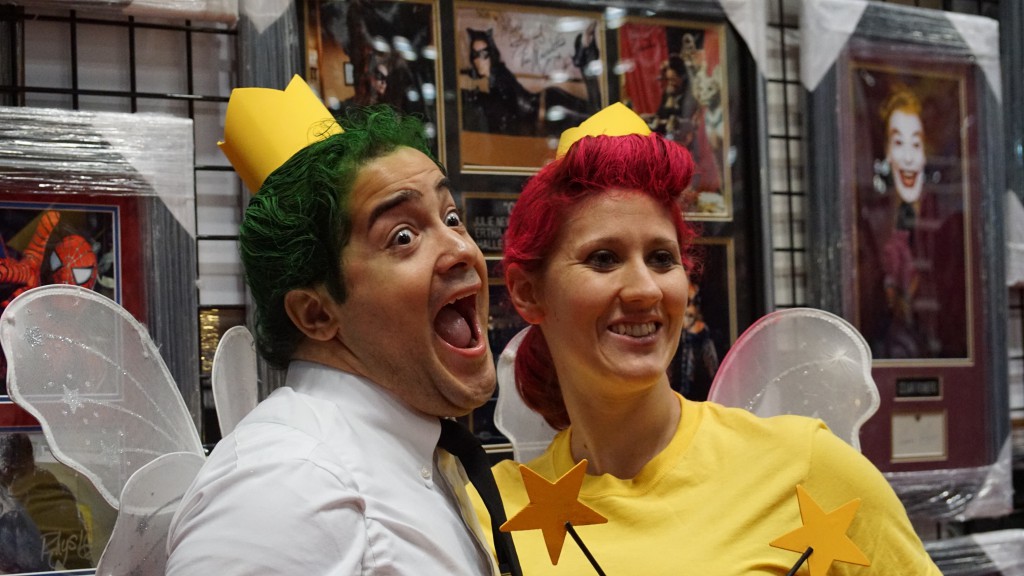 The hunt for anime leggings and Iron Man tees could be quenched at The Block, aka crowded main level. Amongst the photo takers, vendors celebrated Star Trek (a main event of this year’s con) along with a mindblowing Sons of Anarchy motorcycle and the Marylin Monroe auto. The one down side of Comic Con  is the skyrocketed food and drink prices, but at least fans could eat freely around the building or downstairs in the Javits cafeteria. 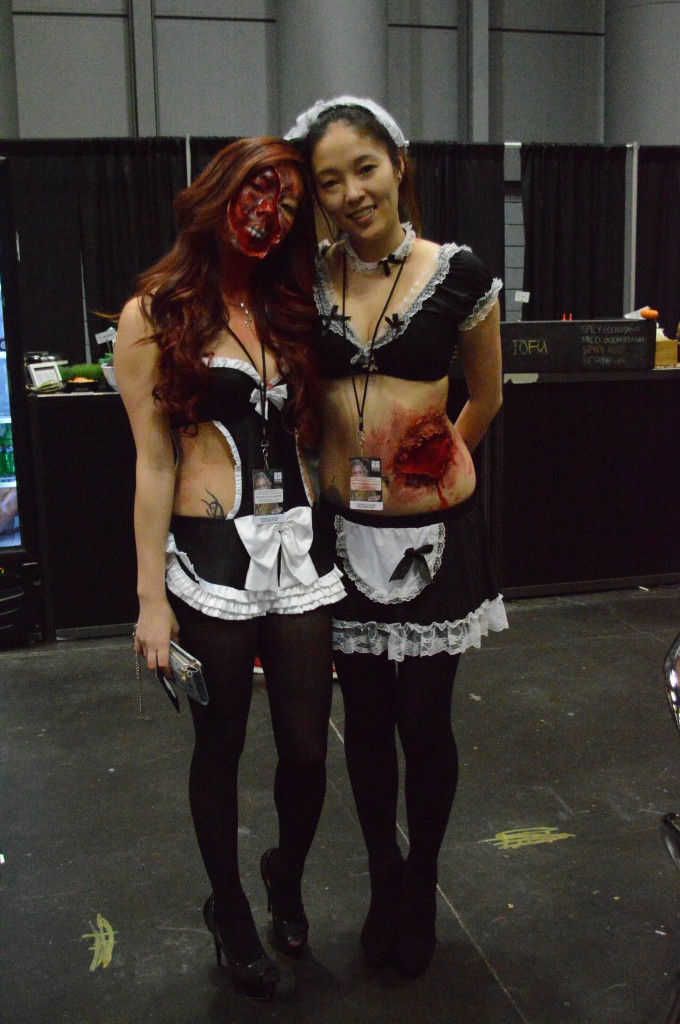 Now for the cosplay….

Stormtroopers, Captain America (many of them), Poison Ivy, Jessica Rabbit.  Even Snow White can be seen marching through Comic Con!  The parties of Deadpools included parades and even a mosh pit, while other professional cosplayers dressed in cinema-quality Penguin, Mad Hatter suits and GI Joe armor.  While the backside-bearing females might have seemed to wear as little as possible, chances are the most scantily-clad of cosplayers had a method and story behind their stimulating gear.  Be it the art, historic comics, toys or costumes, the explosion of New York Comic Con 2014 was an admirable success. 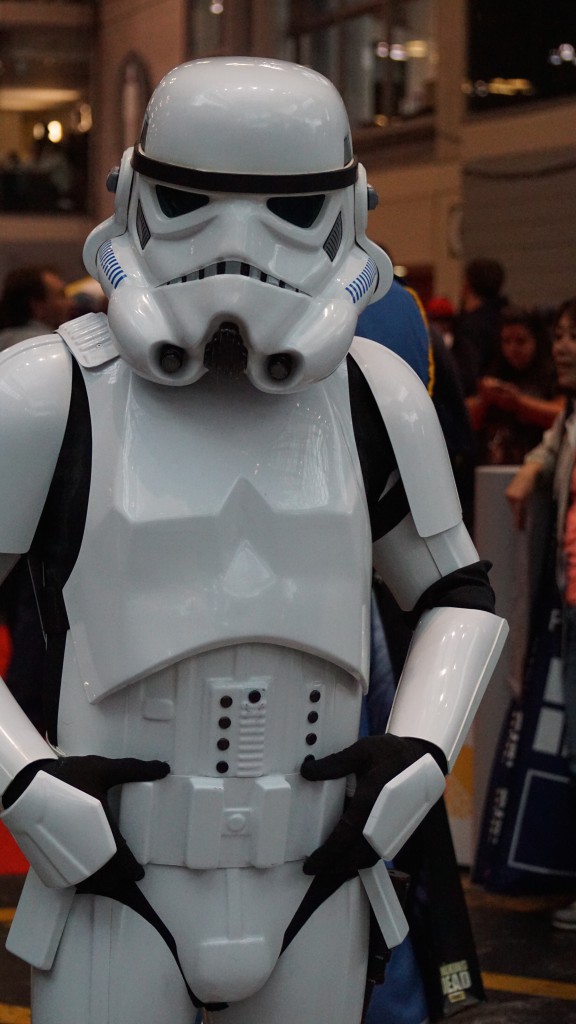 See you next year!!