You are at:Home»Sports»Dynasty
By: Matt Saidman on August 7, 2015 Sports

Isles correspondent Matt Saidman met up with author Greg Prato discussing his new book Dynasty- The oral history of the New York Islanders 1972- 1984. Through extensive interviews Prato, has relived the Dynasty years of our Isles, via the stories that emanated from Old Country Road.  What better to close “The Barn” than reliving the glory years of that building. 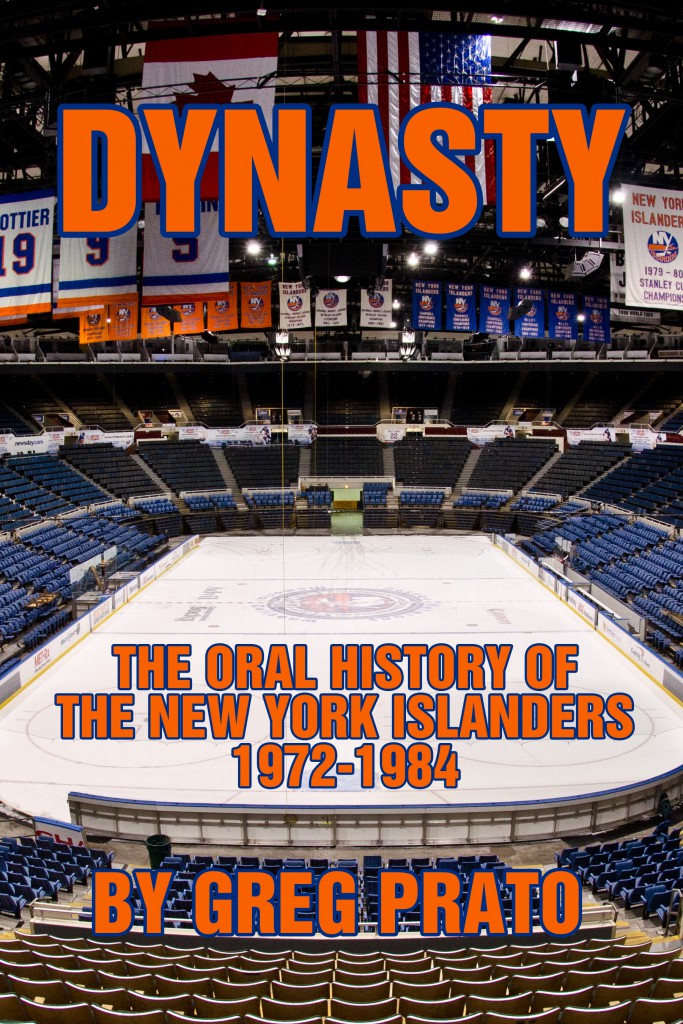 It was very special. If you were to tell me circa 1982/1983/1984 that one day, I would be interviewing many of the players I was following so closely on TV, I would have been one happy child! Being able to interview the likes of Al Arbour, Bill Torrey, Bobby Nystrom, Clark Gillies, Bryan Trottier, etc. I would imagine would be a dreamlike scenario for not just any Islanders fan, but any serious NHL historian…except probably most Ranger fans.

One thing that stuck with me is a quote from Gord Lane in the book, which he talks about the advice that Arbour taught the dynasty-era Islanders teams, tops being “I don’t care if the building catches on fire or if the clock falls – just keep on going.” Meaning no matter what, stick to the game plan. And as evidenced by many classic come-from-behind wins (especially Game 5 of the 1982 Division Semi-Finals, when the Islanders came back from 2 goals down with 5:00 left against the Pittsburgh Penguins to advance to the next series), the Islanders followed Mr. Arbour’s suggestion very closely.

Many picked Butch Goring in the book, but I wouldn’t say he was necessarily “unsung,” as he won the Conn Smythe Trophy in 1981. So, my pick would have to go to John Tonelli, who seemed to always be in the middle of an important play during the Islanders’ dynasty – namely, helping set up Bob Nystrom’s Cup-winning goal in 1980, and scoring the tying and winning goals in the aforementioned Game 5 of the 1982 Division Semi-Finals.

I was not aware that when it came time for the Islanders to possibly draft Mike Bossy, he wasn’t the only player being considered as their top pick – another gentleman by the name of Red Foster was in their sights, who was a center that led the OHL in scoring around that time. Mr. Foster never amounted to much in the NHL, while Mr. Bossy…well, we all know what happened. Another interesting observation came from Dave Langevin, who was on the ice during Nystrom’s Cup-winning goal in 1980, and he said that right before the goal, the Coliseum grew very quiet – as does quite a few instances when something important is going to happen in an important sports game. I went back and watched the clip on YouTube, and by golly, he was absolutely right!

No – all the worthwhile quotes made it into the book!

Hard to say – maybe a sense of closeness/unity between the players and the fans, as Long Island was not considered a “major market” for a sports team, or the fact that quite a few of the players were either with the team from the beginning (when they were not very good) or endured such painful/frustrating playoff loses like he ones in 1978 against the Maple Leafs and in 1979 against the Rangers.

Well, as I answer this question, just a few weeks earlier, the Chicago Blackhawks have just won their 3rd Stanley Cup in 5 years, which many qualify as a dynasty. But…will another professional sports team ever win 19 consecutive playoff series (which the Islanders accomplished between 1980-1984) and four consecutive Stanley Cups? I highly doubt it, that’s why in my estimation, the Islanders of this era are undoubtedly one of the greatest sports teams ever.

So far, I have written a total of 16 books about two subjects – sports and rock music. In addition to the Islanders book, the other sports books I’ve written include ‘Just Out of Reach: The 1980s New York Yankees’ and ‘Sack Exchange: The Definitive Oral History of the 1980s New York Jets,’ with the rest of my books being about rock music, including such titles as ‘MTV Ruled the World: The Early Years of Music Video’ and ‘Survival of the Fittest: Heavy Metal in the 1990’s.’ For a complete listing of all my books, go to amzn.com/e/B002MJ4CXI and to see what I’m currently up to writing-wise, go to twitter.com/gregpratowriter. Thank you for the interview Matt, and LET’S GO ISLANDERS!!