You are at:Home»Art & Music»Featured Artist: Anna Walinska, A Woman to Revere
By: Kelly M. Coffey on May 2, 2018 Art & Music

A Woman to Revere: Anna Walinska

Expectations are such a funny thing. They really can influence which path we choose when we’re trying to make decisions, big and small. I never expected to find myself embarking on a new adventure when I received a press release from an art publicist about the Nassau County Museum of Art which premiered an exhibit titled, Anything Goes: The Jazz Age in Art, Music and Literature, curated by the Museum Director Dr. Charles Riley. 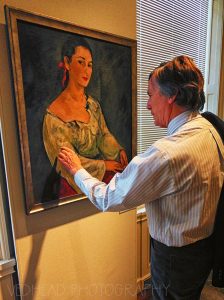 Here I learned of an artist named Anna Walinska, a woman to be revered for her free spirit as she traveled across the world at age 19 to study art against the expectations and approval of her father. It was my honor and pleasure to speak with Walinska’s niece Rosina Rubin during Women’s History Month, to celebrate the spirit and works of an inspirational woman she describes more as a surrogate mother who instilled in her a passion for art very early. Ms. Rubin graciously shared her aunt’s stories as well as her own memories of growing up in the Upper West Side, a child often asked to pose still for many paintings and with limitless playdates to the museums and galleries of NYC.

“It’s always exciting to have a situation when you have great confidence in the people who have invited you to do a showcase.” Rubin said of the museum director Dr. Riley. The two met when Rubin learned the new director was writing a book about ex-pats in the jazz age – the writers, painters, actors, and musicians. Riley, in turn realized Walinska was a major influence of its era, her works had never been shown, and that, to say the least, they should be absolutely highlighted.

Rubin describes the thrill of having her aunt’s artworks premiered at the museum, “Excited to be part of it, the tail end of women’s history month. Those of us who immerse our lives and work in history, we know women were always there but often overlooked, not showcased, so we don’t know about so many of the fabulous women artists. To be working alongside someone who appreciates her work and loves the period, a real scholar, a sharp eye of the creative, is great.” 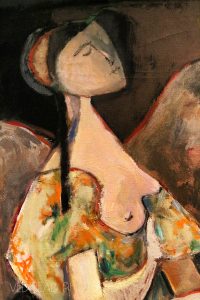 Walinska was creating very early in her life and was enrolled at the National Academy of Design at age 12 and later at the Art Students League. She was expected to go to college as per her parents, but she said no, she didn’t want to go to college, it was 1926 and she wanted to go to Paris to study painting with the greats. Her father was not happy and refused to support her, so she went to his boss to ask for money. This radical young woman paved the way for the rest of us by setting her own expectations, pursuing art when it’s what she loved, and even asked her father’s boss for money which seems no different than today’s online crowdfunding.

As Rubin tells stories of her aunt, I hear her described as a classy and worldly, but very humble woman. Born in London, brought up in NYC, around Jewish culture, sociopolitical with a French influence. Walinska never stopped growing and pushing boundaries. She didn’t make specific choices, she followed her instincts. That is what guided her to choose a trip to Burma over a request for a tour of her personal art studio by the second Museum Director of the Guggenheim Museum, James John Sweeney. Rubin doesn’t know if they ever re-connected, but it’s a catalyst which could’ve possibly sent Walinska’s career to the moon and back.

But Walinska, by no doubt, missed out on anything. She stayed present and focused, her instincts made her an excellent curator for her own gallery, gave people a safe space to express their visions, hosted their very first art shows, and consistently helped to promote their brilliance, including Arshile Gorky’s first New York City one-man show. She used her resources to introduce aspiring artists to prominent figures. Walinska was very proud of her own work, gallery, and life achievements, as she should be, but was also very modest; she didn’t see herself as a painter and chose not to market herself the same way she did for others. 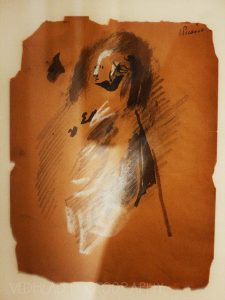 “One of the most interesting things about her work – check how the styles change.”, Rubin notes. “She allowed herself the freedom of exploration. She didn’t stick herself in the box and didn’t really come with commercial success. She has an extensively long exhibition history, would do between five or six shows at one time, but gallery owners weren’t representing women. Still, it drove her to keep expressing herself through different mediums. Always focused on the experience/journey, not the commercial/result.”

Again, I had no idea what to expect when I accepted the invitation to interview Rosina Rubin; I came prepared with some basic questions to help get a conversation started, such as “what advice would you give women artists?”, but once we started talking, I didn’t need them. The conversation about Anna Walinska was quite profound, everything about the interview felt so organic and directly relevant to my struggles and successes as a creative. Walinska made it possible for me to sit here and write stories for you. She helped create a supportive and radical environment for women especially to pursue their passions. 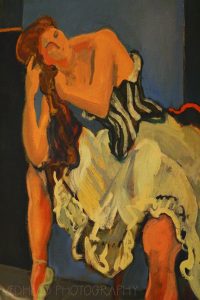 I asked Rubin how she thought her aunt would perceive and use social media if she were alive today. Would or could she incorporate so much technology after coming from such a pure beginning? When Rubin realized it was the 60th anniversary of the trip to Burma, she decided she would celebrate her aunt’s history by sharing excerpts from Walinska’s travel diary on Twitter and Facebook, accompanied with photos and sketches. Walinska traveled by herself, learning and using her experience as a stepping stone for the rest of that side of the world.

Anna Walinska was always way ahead of the times of her choice of media (she loved working with spray paint), and Rubin thinks if she were around today, she would be somewhere online, also playing on social media, challenging women. Walinska was an early adapter in everything she did. Curious woman. Let me give that a try. She would definitely be supportive for the younger artists.

We discussed how women still struggle with finding success in the creative world. There’s a thick skin that needs to develop in order to strive on the digital platform, a place we have to show our works, to be vulnerable, and to get the feedback. We are learning when to use strong or subtle ways of communication, although we agreed we have to be very strong. Rubin continued to say Walinska would have more encouragement if she were an artist today. She’d certainly be a longstanding member of communities and would still be giving new artists their big shots.

What may scare people away from art is how difficult it is to have real success in the industry (and by “real success” we are referring back to expectations of what it is to be a “real successful artist”) and have your creative life sustain you financially, but sometimes it’s frustrating even to have commercial success if it’s not the organic/original vision. Artists have to have the strength to get through people saying work isn’t worth anything or participating in shows and not selling anything.

For the artists in you and me, Rubin left us with a final piece of advice: “If you are a passionate artist or whatever, it’s not an option to not do it. You just have to keep doing it and hopefully you find a way. You find a support network and people to share the experiences.” And they’re absolutely right, without the hardships, we’d have nothing worth having at the end. I didn’t sell anything at my first ever exhibit, but it’s only the beginning and there is no other option than to keep creating. 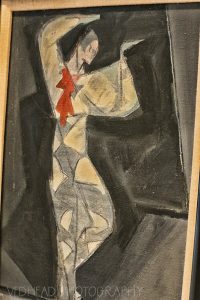 Do not miss out on Walinska’s exhibit at the Nassau County Museum of Art through July! Her work is just a touch of what the jazz age had to offer. Also advised is to bring some wine, hang out on the grounds and watch the sunset. Bring notebook, a camera, and enjoy the show! Anything Goes: The Jazz Age in Art, Music and Literature, curated by the Museum Director Dr. Charles Riley.
Nassau County Museum of Art
One Museum Drive
Roslyn Harbor, NY 11576

A great big thank you to Alexandra Israel, Publicist, for reaching out and arranging everything! Thank you to Rosina Rubin for your time and beautiful stories! Thank you to Dr. Charles Riley for the grand tour of the museum and enriching history! Thank you John & Lauren for allowing me to pursue my passions and always sending over cool topics for coverage!