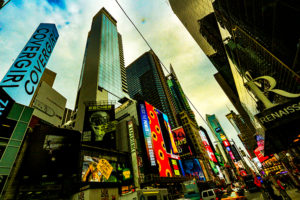 “Mission of 14×48: 14×48 re-purposes vacant billboards as public art space in order to create more opportunities in public art for emerging artists, to challenge emerging artists to engage more with public art, and to enliven the vibrancy of our urban environment.

​14X48 is a sponsored project of Fractured Atlas, a non-profit 501(c)(3) arts service organization. The organization was formerly known as Artists for Public Service Announcements.”

Times Square is pretty much its own interactive art exhibit if you can visually deconstruct the scene’s elements and hang out to people watch (one of my all-time favorite pastimes). It’s incredible what gems can be found if you gaze for a while, like hidden signs and billboards part of a greater project. As someone who doesn’t particularly like the touristy spots, I’m subject to miss out on some of those exciting observations, unless a group of artists decided to create a starting point for what eventually would turn into a scavenger hunt and photo challenge throughout the rest of the city.

An opportunity to visit Times Square for a curb-side opening reception put me in touch with a photographer who answered a call for submissions and was selected to participate with other artists in filling blank billboards throughout the city, much like open studio concepts where communities install shows in unoccupied storefronts to keep a colorful neighborhood.

The project is 14×48. The sponsor is Fractured Atlas. The photographer is Lisa Kereszi.

The piece: The City on Stage, located on the corner of 48th Street and Seventh Avenue.

“Start here: at Seventh Avenue and 48th Street, within view of the current 14×48 billboard. Like the billboard photographer herself once was assigned to do, complete one of Stephen Shore’s iconic student assignments: photograph an intersection.”

“Why should empty billboards be eye sores instead of being used?”, Lisa asked when describing her excitement to have been selected by 14×48 to participate in the citywide project. “14×48 contacted companies to use unused space, like billboards, to rotate art works for one month at a time or until someone buys the space. It ties into what other companies are doing by taking empty office building and store fronts to present open studios. Billboards are a commercial/visual space instead of physical space.”

“The photograph’s location today is so close to the actual theater where it was taken, so it acts as kind of a portal to when it was taken, back in 2000, a little bit like a window into NYC back then. It almost feels like a completely different era, a classical revival.” Lisa described the awe of seeing some of the preserved buildings still in existence in Times Square. “The image fits in to the area, but also it doesn’t fit it. That pose and angle is pretty iconic so even if they haven’t seen my work, they’ve seen that TADA moment; it’s a familiar pose.”

“The photograph itself fits in with my work in general, which up until recently is about fantasy and escapism.” Lisa’s inspiration came from places people escape into, like theaters, bars, haunted houses. “I had a vision of a bigger project reviving burlesque.” The performer on stage is Julie Atlas Muz, the pic was a collaboration where they had first met, and the place Lisa had photographed her and other performance artists. Julie had keys to the theater and said she needed a picture for a postcard, so they went on in one night for the shoot. “It is amazing 18 years have passed, but it feels timeless. Our careers have advanced but we’re still living the dream, doing what we want to do as an artist, being creative.” 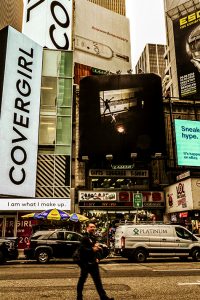 When Lisa was granted the opportunity to participate in the project, part of her challenge was to create a community based element, a way for spectators to engage. Lisa came up with a long list of photographers she admired and who were important to the history of photography, her focus primarily NY-based, and mapped out a scavenger hunt throughout the city. She wanted to allow people to feel like they could have fun “choosing their own adventures” and were hopefully also seeing artists they respect.

When selecting the locations and photographers as part of the scavenger hunt, Lisa made it a point to diversify the historical aspect, to include photographers who were women, of all races and ethnicity, as well as an openly-gay artist. The only real political part is the final entry where she acknowledges her list of photographers is very limited because the scavenger hunt could only have so many stops, but spun it into her own challenge by asking people to pick their own inspirational photographer to represent the underrepresented and unknown. Lisa encourages them to highlight an underrepresented community or artist who means something to them, to create something inspired by that artist, and to share these works on social media.

As Lisa and I geeked out about the thrill of exhibiting works, being seen as artists, and the rewards and mystery of captured moments, my favorite topic of balancing art while being a full time teacher with other daily responsibilities came up.

“If I could I would just make art and do research on projects all the time.” Lisa continued, “There’s where I’m at, balancing family, art, and an intense teaching job. I also have my art career and art practice that’s separate. I’m juggling all these jobs, but acknowledging that is important. We’ve picked a hard life for ourselves, and we’re very lucky because we chose it. I have to tell my students either you’re compelled to do this or not, because if you’re not, you shouldn’t do it. It’s just too real: full of poverty, debt, heartache, rejection.

“I didn’t really have a choice in what I wanted to do. I had something to say; I know how to say and express that visually, and I should! I have something to give and share and that’s important. I think teaching is valuable because any values I have about art and artists can be passed on. One assignment I give students is photograph someplace you’ve never been before, not unlike the way Diane Arbus did. I want my students to engage with the world and see outside their comfortable reality, a chance to walk in someone else’s shoes and interact with someone they maybe wouldn’t have otherwise.”

Assigning her students to photograph a stranger can terrify them because they’re still young, but she leaves it open for interpretation and provides a space for them to find their comfort levels, so long as they continue to enjoy learning and creating.

“When I was younger I thought I’d be a writer, but it became clear after pursuing photography there’s a visual language. While not all of us are good verbally as well, some of us have an inherent visual intelligence that can create narrative and stories. There’s a lot of talk in the photography circles and how photography can be a kind of visual poetry. The billboard – thousands of people are going to see it – it’s the most exposure I’ve ever gotten, and I’ll never really know how people react to the image. But, I love that it’s open ended and people can bring whatever they want to it.” 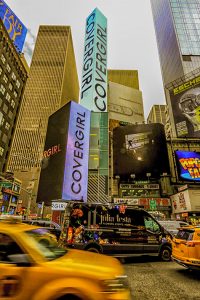 In all my conversations, I ask every artist I meet: What do you want people to know about art? (Could be anything from individual art to general industry topics.)

“That’s a big question…. It’s really vital in society to not only give people an outlet for self-expression, but to also make the world a more beautiful and just place. Giving people something to think about, I hope art people make them think about it, hoping they don’t just glance or swipe to the next. I think now with the arts being made less and less an important thing by “powers that be” the government doesn’t award art grants where other countries, like Europe and Canada, do. In a way our capitalist country has made it so we need capitalism to survive but art is meant to draw people in, grasp the beauty, and if they look they’ll see there’s a lot more underneath there.”

Be sure to catch Lisa Kereszi’s piece, The City on Stage, in the heart of Times Square. I went to see it on a cold weekday, right before heading up to the Bronx to see my buddy Luisa’s mural, and enjoyed being caught up in the energy of the streets buzzing, cars honking, and collective chatter of passersby. I hung out on the corner with my camera, probably looking a little bit like a creep just people watching and snapping random shots, studying the billboard and landscape, and feeling grateful and inspired by Lisa’s and 14×48’s roles in empowering artists to collaborate in educational, fun, and creative city wide projects.