You are at:Home»Art & Music»Featured Artist: Marilyn Artus
By: Kelly M. Coffey on June 13, 2018 Art & Music, Travel and Leisure
Marilyn, as she has several exciting new initiatives coming up including:
A group show at Robert Mann gallery that opens on June 14, 2018. The exhibition is about current female icons who are symbols of empowerment, coming together, caring, and lifting each other up as opposed to historically male systems of power that focus on force, domination, division and destruction. In this case, Marilyn’s work will be a tribute to Connie Johnson who is running for Governor of Oklahoma. She is a progressive fighting for budget reform, funding education, legalizing marijuana, criminal justice reform and more. She really stands out in the field, a black woman candidate in a sea of ten other candidates- all white males. To get rid of the “Personhood Bill”, the anti-abortion a draconian bill that said life begins at conception, she brought an amendment on the floor to make male masturbation illegal.

Next June, Marilyn is hitting the road and will begin a 14 month road-trip  across the US in celebration of the 100th anniversary of women gaining the right to vote. During her travels she will be sewing, Her Flag, a grand flag measuring 15 foot by 26 foot and will be collaborating with local artists in each city.

When I meet experts in their fields, there’s nothing I enjoy more than watching how passionate they become when describing their crafts, even if the topic is so far over my head (ya’ know, like quantum physics and stuff – love it, but WHAH?). When arms start flailing and voices crack I know I’ve met a kindred spirit whose soul is fueled by fire, an individual who will always challenge the norm and conformed, pushing to show us what’s outside the box.

I have only had the chance to speak with artist Marilyn Artus via phone for an interview about her forthcoming exhibit opening at the Robert Mann Gallery on Thursday, June 14th and hung up feeling she is a woman who has lived her life weaving art and history into momentous stories. We spent most of our time actually discussing her future Flag project.

I invite you all to visit us Thursday night at the gallery in Manhattan; I’m positive Marilyn’s exhibit going to blow our minds!!

Marilyn Artus’ vivacious energy set the tone for our call from the moment I heard her voice. Her personality is sharp, open, humorous, and is enthused to share her motivations as well as invite others to contribute. It’s not meant to solely be seen, but to be moving work of collaboration, a special way to make history together. Originally from Oklahoma, she describes herself as being a positive, confident person with an unbreakable spirit. She also goes on to say she’s obsessed with educating others through her art because she has “a long history of giving a shit”.

When I asked Marilyn what she would like people to know about her art or art in general, she replied, “As far as what I’m doing right now, I’m focused on honoring the centennial of women’s right to vote, protecting our rights. I’ve always been focused on female issues.” She feels very fortunate to have found success as a commercial artist, it allowed her to quit the day-job and explore her artistic vision. Marilyn had no idea what would come out when she went on her own, but says, “The feminist voice came roaring voraciously out of me! It may sound strange, but I let whatever happen and really made it. And I have a lot to say!” 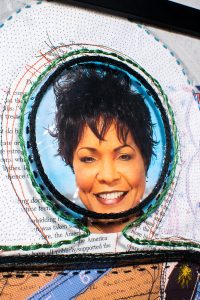 The project celebrating women’s right to vote inspired Marilyn to think up something really special; she felt compelled to do something herself after reflecting on where we are as a country today and what else we can be doing to include women in our government, to get them to the voting booths. “I think women are way underrepresented in our national and state offices. Women aren’t as excited to vote because they don’t think they are being represented. They’re not engaged in the franchise. The more women who get involved, the more excited they get to vote. I know more women who are running, which is fantastic!”

The exhibit which is scheduled to launch next year is a 14-month road trip to 36 cities, with the call for submissions and invitations to artists out soon. How she chose the cities came in order of the country’s ratification; she has poured a year of her time researching the history of women’s suffrage specifically and how to best present this show. “I want as many people on the journey, it’s just going to feel really good.” says Marilyn. “Starting in Wisconsin, each artist will have a stripe she made. We’ll meet in a public location, sew the stripe onto an American flag, and make it into a public and collaborative performance. We’ll go to all kinds of different places, meet people where they are, and hopefully engage with people who don’t encounter gallery artists and art.”

Let’s give Marilyn a wonderful welcome tomorrow night to celebrate her vision, extraordinary hard work, and show our support! I’d love a chance to meet any of you, as well!