You are at:Home»Art & Music»Flock to Flamingo for “Paula Abdul: Forever Your Girl”
By: Lauren Jablonski on August 16, 2019 Art & Music, Nightlife

Paula Abdul, legendary dancer, choreographer and singer launched her residency, “Paula Abdul: Forever Your Girl,” at the Flamingo Las Vegas. After being an entertainer for over 30 years, Abdul flocked to Las Vegas to showcase her signature dance moves, share success stories, and talk about how positivity helped her deal with life’s most difficult challenges.

Abdul kicked off her show proclaiming “I know I’ve been out of the spotlight for a while, now I’m back.” However, the Forever Your Girl residency was almost postponed because Paula didn’t have all the costumes, props, and technologies to give the show its Vegas flair. Abdul did not want to disappoint fans by cancelling the first four shows and went on to deliver a raw and real performance that was nostalgic, entertaining, and fun.

Abdul is an expert when it comes to overcoming challenges and doesn’t let anything get in the way of achieving her dreams. Paula knew her purpose in life was to be a dancer, after she saw Gene Kelly in Dancing with the Rain. Abdul was determined to be a Laker Girl, and would not take no for answer. She signed up to audition three times, under different names, and even changed outfits and hairdos until she made the squad.

During the beginning of Abdul’s career, she lived off Top Ramen and SpaghettiOs while sharing a small two bedroom apartment with four other Laker Girls. To practice her dance moves, Paula would lock herself in the bathroom and stand on top of her bathtub holding the curtain rod so she could see her legs in the mirror.

“During those humble days I cranked out some of my most award-winning choreography,” said Abdul.

Being head choreographer for the Laker Girls, Paula Abdul caught the attention of the Jackson family and went to on create the choreography for Janet Jackson’s music videos “Nasty” and “Control”. Abdul stated that she is eternally grateful for the opportunity and is thrilled that her and Janet currently both have residencies in Las Vegas. During the show, Paula and her talented team of dancers even performed some of the legendary moves from “Nasty.”

In 1987, Paula gathered her savings to record a singing demo and was signed shortly afterward to Virgin Records. In 1988, Forever Your Girl made history with the most number one singles, making it the most successful debut album of its time.

During her residency, Paula performed 11 of her chart topping hits including “Vibeology,” “(It’s Just) The Way That You Love Me,” “Crazy Cool,” “Cold Hearted,” “Opposites Attract,” “Rush Rush,””Blowing Kisses in the Wind,”“The Promise of a New Day,” “Knocked Out,” “ Straight Up,” and “Forever Your Girl.”

Be sure to rush, rush over to Flamingo Las Vegas to see Paula Abdul and enjoy these timeless chart toppers and dance routines. Tickets Here. 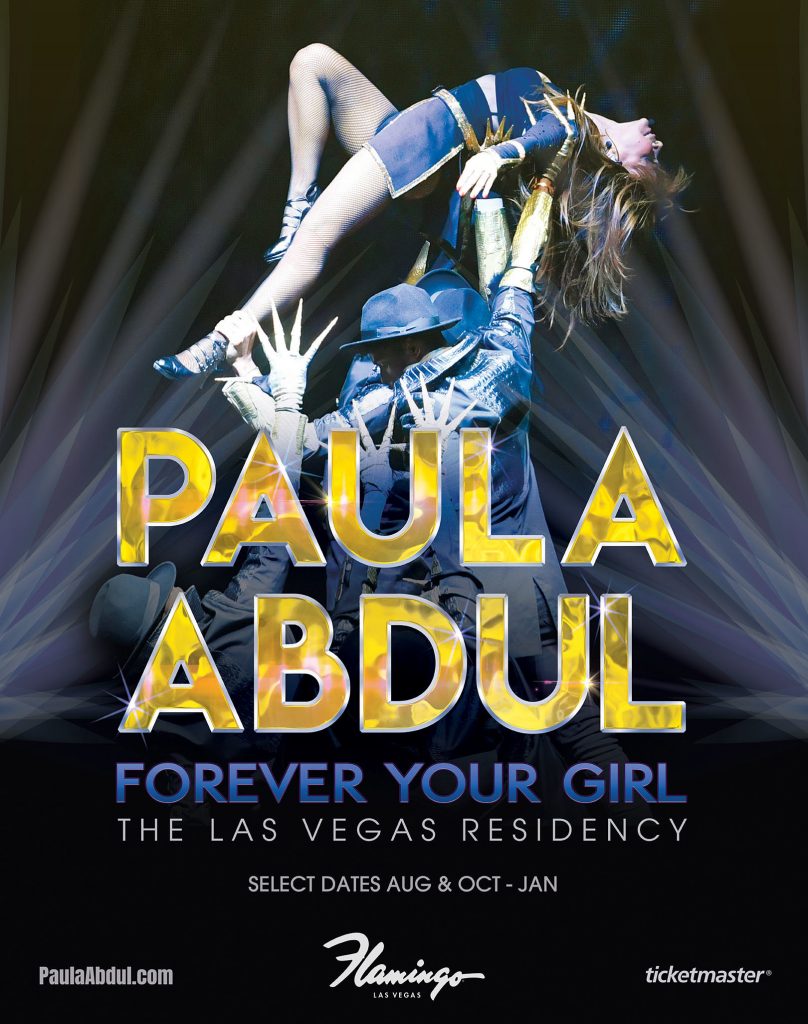