The fun kicked off with The New Musicals Project at the Patchogue Theatre, with an evening of show tunes that featured compositions of Howard Beckerman and a preview of his new show Life After Life, which will be coming to Patchogue Theatre Main Stage in September 2013. An
evening with Soundswell followed on Thursday. The group’s innovative sound hybrid
brings together elements of rock, folk and jazz that is encouraging the rise of a newfound fan base for what is being called, “swellfolk.” The music continued on Friday with Patchogue Jam 6,
featuring: Butcher’s Blind, Cassandra House, Kerry Kearney and
Iridesense. 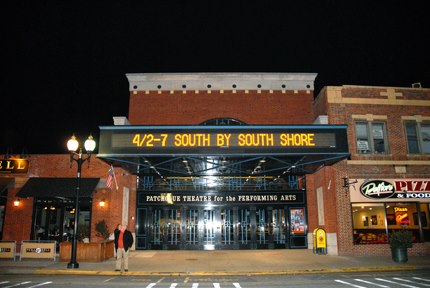 Butcher’s Blind, who are from Bellrose, New York, are composed of Pete Mancini, Paul Cianciaruso and Brian Reilly. They have a rich American sound that twists in each of their own bodies of emotional character and this is the lifeblood of their very creative sound.

Cassandra House is a singer-songwriter native to Patchogue. Her country voice and heartbroken lyrics speak to listeners in every way possible. House connects very genuinely to the core of everything that defines folk music and brings a renewed freshness to a style of music sometimes under appreciated or overlooked by today’s younger population.

Kerry Kearney, a guitar ace, plays his heart out with his custom made guitars and his captivating song lyrics. It is rare nowadays to find a musician of such caliber, who is devoted not only to giving a good show but also to constantly improving his playing technique. Kearney is no stranger to both local and international music scenes. He and his band have been significantly highlighted at events like The Crossroads Music Festival and the Great South Bay Music Festival –the latter of which is another Patchogue hosted event.

“The South by South Shore Music and Arts Festival is a fun expedition for all ages …This six day, melodious festival offers events in music, art, film, theater and spoken word.”

Iridesense has been around for two decades and they only continue to improve with time. An endeavor started by siblings, Tara and Rick Eberle, the duo (along with fellow members Rich Drouin and Rob Viccari) are clasped together musically with the kind of chemistry that can only be achieved through a long band relationship. One can hear this special quality in their songwriting.

Those who may be looking for something of the more classical nature, never fear: The Atlantic Wind Symphony is not to be forgotten. A diverse group with quite the beaming classical reputation, the AWS is the oldest, full professional concert band on Long Island; going on its 45th Season. The ensemble prides itself on only recruiting Long Island musicians.

Assembling a great lineup such as this one shows that Patchogue is mindful of presenting a well-balanced festival with a different type of sound for everyone’s liking.

The South by South Shore Music and Arts Festival is a fun expedition
for all ages that also supports an array of local participating food venues, including: 89 North Music Venue,
Roast Coffee Shop, The Brickhouse Brewery, The Tap Room, Bobbique and
the Plaza Media Arts Center –just to give you an idea. The incorporation of a New Orleans style “sidewalk promenade” going by the participating venues adds an extra dimension of American culture to the mix as well. Patchogue was already a great supporter of local entrepreneurs and with this new festival, it has moved itself to the next level for attracting those with an interest in both activities and businesses off the corporate path.

South by South Shore might be over for the year but, you can still come experience everything the Village of Patchogue has to offer and get to know all these fantastic artists –no trip to the airport required!