You are at:Home»Art & Music»Give Three Cheers for Bob Marley at Marley Fest!
By: Falesia Allie Kelly on July 16, 2013 Art & Music

Rich Rivkin is best known for presenting the ‘Summer Arts Festival’ series but this year, there was a twist. For the first time ever, a reggae music festival became part of the concert series! On Sunday July 14 during a beautiful, sunshine-filled afternoon, four local Long Island bands paid tribute to the talented Bob Marley. Everyone had great energy as they jammed to the sweet calypso beats on the open lawns of the Vanderbilt Museum during Marley Fest. The rainbow tie-dyed backdrop added to the picturesque scene that was painted by local artists. These very talented local artists participated in speed painting as they were inspired by the live music and the audience interaction. 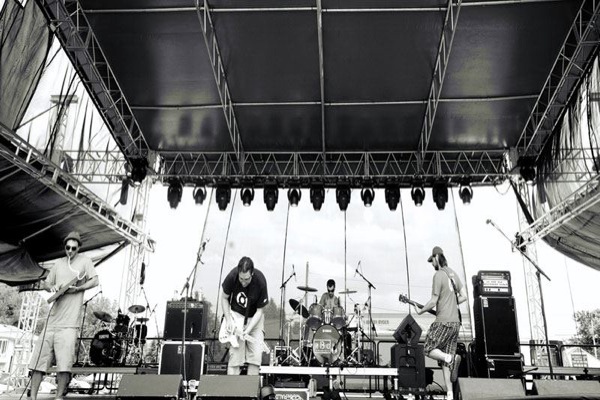 Marley Fest blended music and art beautifully, as the artists arrived first; assembling their easels and mixing their paints as they found shady spots under the trees. The happy spirits that surrounded this festival, along with the smooth reggae harmony was great inspiration for them too. Tom de Gruyl, 57, of Ronkonkoma, used pastels to create a piece of art exhilarated from the melodies playing within the grounds. As everyone sat under their tents to escape from the sun’s piercing rays, the atmosphere brought you back to the Woodstock days: everyone was in great spirits, getting along, and just having a great time in general.

“As everyone sat under their tents to escape from the sun’s piercing rays, the atmosphere brought you back to the Woodstock days: everyone was in great spirits, getting along, and just having a great time in general.”

Local band Soul Junkie was one of the four Long Island reggae bands to play at Marley Fest. Soul Junkie played a variety of reggae and funk, covering the music of Sublime and Bob Marley. ‘I’m psyched to do it,’ said the Soul Junkie lead singer Michael Martin, 31, from Bay Shore. ‘After all, we’re here to pay homage to the great Bob Marley.’ Although Soul Junkie has played at smaller venues before, this was their first festival playing alongside other artists.

The first reggae-themed event was a great success, and it is highly likely that it will continue every year. Rich Rivkin, who started the summer arts concert series in 2011 adds ‘I would like to plant a seed for a community that grows around a reggae event.’ However, even if you missed Marley Fest, the concert series is not over yet! There are a few other themed festivals this summer including: a Woodstock revival, one that centers around the jazz-fusion, a blues event, another event that focuses just on world music, and finally, a concert that celebrates the sounds of the Grateful Dead. No matter what genre of music you enjoy, definitely check out the other festivals because the artistic aura is unexplainable and everyone should get the opportunity to experience it this summer!

To keep up with Rich Rivkin’s concert series, you may do so by visiting his page on Eventbrite or following him on Facebook. You may also learn more about the Vanderbuilt Museum by visiting their official site, Facebook page, and Twitter page as well.