There hasn’t been a comedy quite like this one in a very long time due to the fact that it’s not often that a movie comes along that is both well-rounded and keeps you laughing from the opening scene to the end credits. ‘This Is The End’ might just be one of the most tasteless, ridiculous, and hilarious comedies of the 21st century. The movie opens with Seth Rogen at an airport where a passerby says, ‘Hey, Seth Rogen! What’s up, man?’ So of course the audience instantly know that he’s going to be playing a version of himself. In fact, all of the actors, comedians, and singers who are in this movie portray caricatures of themselves in some way, shape, or form. 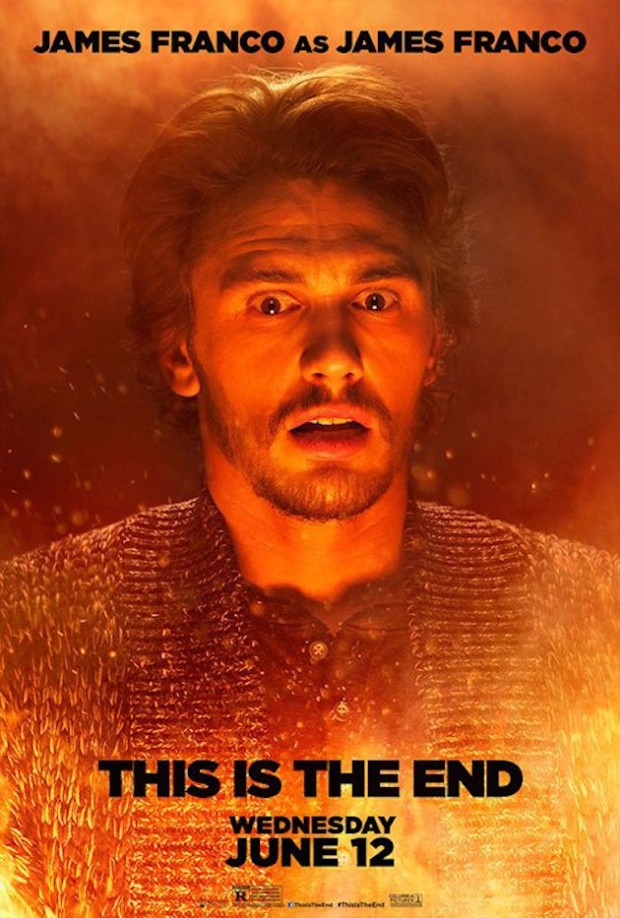 The movie version of Seth picks up his buddy Jay Baruchel, who is known as the ‘not so famous’ guy throughout the movie, and they head to James Franco’s house for a party where most of young Hollywood is seen drinking and hanging out together. It’s a nice twist that is obviously poking fun at how the media is constantly portraying celebrities in a negative light, especially if they are caught doing something that they shouldn’t be doing by the ever-watchful paparazzi.

Continuing with the over-the-top-theme of the movie, we are introduced to Michael Cera, who makes an appearance as a drug addict. Meanwhile, Jonah Hill keeps audiences laughing with his over-the-top ‘nice guy’ act throughout the entire flick. In actuality, none of them behave this way in real life but it’s what the magazines want us to believe. Besides, let’s face it: the press does have a certain amount of power over how our favorite celebrities are portrayed in the media.

“Basically, if you had to summarize the plotline of this comedic gem, it’s a tongue-in-cheek look at how these comedians would act on Judgment Day and a hysterical spoof on the belief in a Biblical doomsday.”

As the movie goes along, the audiences watch as Rogen and Franco take a walk to get some snacks when they discover a ferocious, gigantic, and almost Satanic-looking creature storming through Los Angeles. As the monster destroys everything in its path, the Apocalypse begins with a downpour of rain. It’s a hilarious satire on the predications that can be found within the Biblical ‘Book of Revelation’ and these scenes garnered quite a few laughs from the audience.

Our intrepid heroes somehow make their way back to the house and almost everyone starts to escape; or at the very least, they try to get out of there while they still can. Before long, there are only five of them left in the house: Rogen, Baruchel, Franco, Hill, and Craig Robinson. The remainder of the movie shows scenes that are both horrific and hilarious at the exact same time. There’s even one memorable scene with Seth and James talking about making a sequel to ‘Pineapple Express 2!’ You almost feel as if you’re eavesdropping on a conversation with your favorite comedians when you watch this movie.

As they all try their best to survive the Apocalypse, there are sinkholes sucking people in, and let’s not forget about the giant monster that’s running around Los Angeles! Basically, if you had to summarize the plotline of this comedic gem, it’s a tongue-in-cheek look at how these comedians would act on Judgment Day and a hysterical spoof on the belief in a Biblical doomsday.

All in all, this movie is a must see! It’s definitely worth the money and will probably go on to being one of your favorite movies of all time. ‘This Is The End’ is a well-balanced comedy that has escaped the curse of having the plot drag in the middle or an ending sequence that puts the audience to sleep whilst they are still sitting in the theater. So grab your best buddy or a hot date and get a good seat because you’ll be laughing all the way to the end!

To look up movie times, purchase tickets, or locate a movie theater near you that is playing ‘This Is The End,’ please visit either Fandango or Movie Fone and start making plans to see this hilarious comedy with your family and friends!