You are at:Home»Around the Web»Should Hip Hop Celebrities be Commenting on Ferguson?
By: Troy Patterson on August 21, 2014 Around the Web, Entertainment 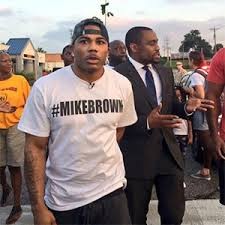 Rappers like Nelly have received criticism for speaking out on the police shooting of teenager Michael Brown.

On August 9th in Ferguson, Missouri, an unarmed American teenager was gunned down by a police officer. At first the reports and the details behind the shooting seemed a bad nightmare no parent should need to live through. What followed was a week of protests and new details emerging about the shooting that substantiated friends’ accounts of Michael Brown’s fatal shooting. That is when the protests turned violent that some celebrities felt compelled to speak and share their views and their own personal interaction with the authorities. Everyone from Jesse Williams (Greys Anatomy), Moby, Lena Dunham and Mia Farrow made their opinions clear.

When it comes to celebrities in the hip hop community, their reactions have not been well received. 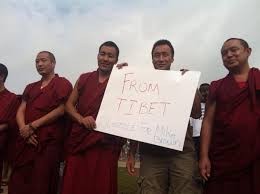 Keke Palmer, TI, Nelly, BOB, Nicki Minaj, Jay-Z, Kanye West, Drake, Lil Wayne and Jeezy (who made headlines by visiting the site where Brown was killed, pictured above) all received criticism for feelings they evoked during last week’s protest following Michael Brown’s death. Rappers and other entertainers are held to a double standard when it comes to political matters or matters of taking a stand in the community. It seems that hip hop artists are almost prompted to say their opinion on the matter in Ferguson.

In the past, MCs made songs like “The Message” and “Self-Destruction” that created a narrative from the artists perspective that was aligned with their communities disgust, fear and anger toward matters of police brutality, drugs, poverty and other issues plaguing their neighborhoods of the same socio-economic levels. Long Island’s own Public Enemy often took political stands and infused their beliefs with the music. 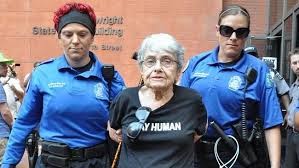 Unfortunately, today what we are seeing more and more that opinions can differ.. and that’s okay. Unless, of course, you’re a rap artist attempting to fan the flames of a community that simply has had enough. The community clearly distrusts the police and is very weary that justice will be served. Largely due to the fact that an arrest has not been made yet for Darren Wilson, the officer who killed Brown. My point here is this: We weigh the opinions of our rappers and singers on matters like these too heavily.  Simply put, your damned if you do and damned if you don’t.  Besides, support for Ferguson has gone global.  I have read tweets from protestors in Gaza and support from Tibet, Russia other corners of the globe.  A 90 year old Holocaust survivor was recently arrested in support of the Ferguson protests!

In short: Yes, we hold our rappers and entertainers to unbelievably high expectations when it comes to matters of social injustice. Let’s be honest with ourselves, though. Do you really want Lil Wayne leading a community of protestors when he calls himself a Martian?

Oh yeah, if you haven’t noticed I left out the factor of the race issue in this article, because honestly should it matter? Do you think artists should be so fervent about Ferguson?