Nassau Coliseum was converted into a Mecca for the art of body modification for the United Ink Tattoo Expo. This was a celebration of individuality, creativity and art. The time honored practice of injecting colored pigments into the epidermis of people to create colorful and spectacular pieces that will just astonish you!

100,000 square feet of Nassau Coliseum was dedicated to United Ink Tattoo Expo. Hundreds of independent tattoo shops, jewelers, supply shops, vaudeville acts, t-shirt suppliers and musical acts promoting their work and networking at its finest. Long Island may have been the epicenter of this event but, shops worldwide set up at this venue. Among some of the notable ones were World Class Tattoo Machines based out of Copenhagen, Denmark. I was able to sit down with Klaus Roenne, CEO of World Class Tattoo Machines. He has been planning this trip to lovely Long Island for the past 11 months. 11 MONTHS!!! Mal, another notable artist, made his way to this event all the way from Tokyo, Japan! Looking at some of his work was an awe-inspiring experience as well. Simply amazing! The fine detail, use of muted colors and intricate patterns his work required made Mal one of my personal favorites. You can view some of his work at Electric Sheep Works. 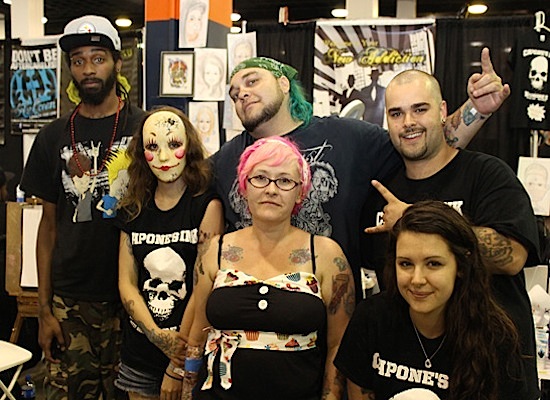 There was a national flair to the event as well. We were impressed with the work displayed by Capone’s Ink, based at 6717 Belair Road in Baltimore, Maryland. They were super approachable, courteous, confident and very skilled. Owner, Sean Blade proudly boasted artists Mike Martin, “Black” Kab, and Wolfgang. Glendale, AZ was well represented by Timeless Art. Bobby Moss from Timeless Art had a great set up. The model he used to displayed his work was his wife Heather Moss. We also met Nick Malasto from N.E.P.A. Tattoo Club. This is a newer shop in the Pittston/ Wilkes-Barre region of Pennsylvania.

As far as local representation is concerned, local shop Tattoo Lou’s was a major sponsor. They had people representing all six of their locations. Asylum Tattoo donned some of the most creative T-shirts. One black t-shirt featured Hannibal Lecter from “Silence of the Lambs,” wearing a straight jacket and mouth guard. Asylum Tattoo is a husband and wife shop, run by Spencer and Mindy Reinstein. The duo specialize in all types of art, including: new school tattoos, abstract, religious, portraits, as well as piercing and Micro Dermal implants. I saw them perform a Micro Dermal and it was not for the squeamish. However, I have to say it was much more appealing to see after completing with the finished product. Asylum is planning a summer BBQ in July. Bookmark Asylum’s Facebook page for exact date and time. They are located at 1210 Montauk Highway, Copiague. Just look for Spencer’s orange motorcycle parked out front.

“…these works are deeply laced with a one-of-a-kind passion, flair and attitude. The overall benefit of getting to walk out with a new and real understanding of this industry [is] the best take away…”

What would a tattoo convention be without a show? DJ Erk was spinning dirty beats and sick drops in the lobby. He came complete with a contortionist, a B-Boy stepper, and a raver girl. Fukitt clothing company, a staple at rave events, was in full force at the expo. Tattoo legend, and very dedicated to his craft, Anthony “CrazyFace” Sines was even in attendance! Other non-tattoo related activities were held as well, including a pole dancing contest hosted by L.I Exotics! The Emporium in Patchogue was also handing out lists of shows along with various promotional pieces. Everything was well set up to be sure!

Walking into the Coliseum, I was skeptical. After speaking with Mike Martin at Capone’s Ink, I realized we weren’t so different. My passion is words. His is color and design. Nick Malasto with N.E.P.A. Tattoo Club discussed the difficulties in starting and maintaining a new shop. Most of us understand the risk involved in change. Ceoio of Asylum Tattoo described the passion involved in creating art that someone wants to display. As the Medici family commissioned art by Michelangelo during the Renaissance in Florence, Italy, Ceoio is commissioned by paying customers to reproduce some of the same works of art etched in flesh. When thinking along those lines, Da Vinci’s, Michelangelo’s and Van Gogh’s works can be preserved over time. Unfortunately, being art being injected into skin has its drawbacks. The primary disadvantage is that the work dies with the wearer. It has a shelf life. That is sad because these works are deeply laced with a one-of-a-kind passion, flair and attitude. The overall benefit of getting to walk out with a new and real understanding of this industry was the best take away though. The minds of these artists are wallpapered with design!

You can see lots of photos from the event in this album from the LIB Facebook page!

All photos here are credited to Bob Savage.