You are at:Home»Art & Music»Legends of Ol’ Skool locked down a lively show at the Emporium!
By: John Milovcic Kelly on May 6, 2013 Art & Music

“Hotel Motel! HOLIDAY INN! The Roof, the roof, the roof is on fire! WE DON’T NEED NO WATER LET IT BURN YO, BURN YO!”

All the old school calls were out in force at the Emporium in Patchogue for the Legends of Ol’ Skool show featuring New York’s own Rob Base and melodic duo Nice & Smooth. The Emporium was electric with the suspense, waiting for the show to get going.<

Rob Base began the nostalgic night. I had first seen this 21 year old MC rock out an all time jam with “It Takes Two” back in 1988. This fast paced, bass-intensive masterpiece, where he cleverly but not so subtly blasted McDonalds’s Big Mac burger, is still a crowd pleaser. Jumping out on stage promptly at 10:10, Base played to the entire packed house in Patchogue. Even after being a musical icon for so long, Base still acts with true showmanship: delivering great eye contact, a winning smile and unbelievable energy. Personally, I have seen Rob Base several times; last year being the most recent show. Friday night he sounded even better than I can remember from those past experiences! Along with the many other people in this club, I had a prime spot to see the show. The combined acoustics, light show and the amazing energy involved makes the Emporium an ideal space to present this type of concert. Base’s finale, “Joy and Pain,” followed by an impromptu singing of “Happy Birthday” to some lucky lady in the audience, met with a thunderous applause as he exited the stage at 10:50. 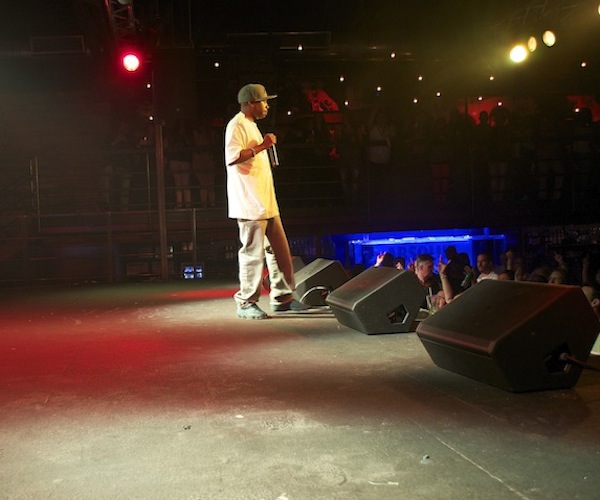 As the clock struck 11, Nice and Smooth was introduced. The duo of “Greg Nice” and “Smooth B” left no seat filled. The duo came in with an a cappella style introduction of themselves. Greg Nice started a 10 minute beat box riddled with chants, calls and rhythmic drum sounding beats while Smooth B started with carefully crafted lyrics over this manmade bed of sound. This technique was perfected by fellow rappers, Doug E. Fresh and Slick Rick years ago and you can tell that Nice and Smooth are students of their predecessors’ style. This display was worth the cost of admission alone! Nice and Smooth invited local legend “Flash Blend” to the stage, and after a few minutes of playing towards the crowd that elicited a response and a comedic interlude, the duo performed “Hip Hop Junkies,” one of the staples in the duo’s repertoire.s

As Greg Nice delivered his lyrics with the force of a Mack truck, the stage turned out not to be enough for him. He jumped into the crowd, found the center of the dance floor ,huged a few people, posed for pictures and headed for the extreme rear of the room. All the while, Smooth B, sat on the elevated DJs area, talked to his friends and shared something with his friends that made him laugh intensely. It was a great visual. Speaking for myself and probably at least some other fans from the night, when I see a performer enjoying him or herself, that just adds to my own experience. Smooth B delivered his slick-as-silk lyrics and the crowd erupted.

“The technique[s] displayed [were] perfected by fellow rappers, Doug E. Fresh and Slick Rick years ago and you can tell that Nice and Smooth are students of their predecessors’ style. This display was worth the cost of admission alone!”

Nice and Smooth teased the crowd with lyrics from “Dwyck”, (an acronym for Do What You Can Kid.) “Dwyck” was a 1992 “summer anthem” credited to Gangstarr, (made up of MC Guru and DJ Premier,) which featured Nice and Smooth, and the song remains one of their biggest hits. Hearing the crowd cheering with delight, they paused. The very mention of lemonade in the lyrics of the of the song, bought a round of applause. After Greg Nice started his first lyric, again, he went off in the crowd. This time he stopped in the middle of the floor and stayed there for the duration of the set. The second verse was intentionally left out, as to pay respects to MC Guru who originally sang that verse but passed in 2010. To fill this void, the duo chanted “Guru and Premier!,” the latter of whom was not in attendance. Smooth B followed with his animated, explosive lyrics, as Greg Nice danced with all audience members willing to dance with him. Live entertainment at its very best!

Looking back on the entire hip-hop genre, as a 34 year old who spent his first 20 something years in the Borough of Queens, I came to realize that I had seen this genre rise from the start. People from the area would see and hear things like KRS-One battling Mc Shan and LL Cool J, followed up by a change to party based artists like Rob Base, Nice and Smooth, Black Sheep and Run DMC. Summer BBQs back then featured all this great music. After the mainstream of the genre shifted to the west coast, and developed a California “funk” type of sound, this party-styled, “get people up and dance” idea was all but over. Friday’s show caused me to realize how much I missed music that had no agenda. It wasn’t a five minute promotional piece bent only on convincing people to buy new Jordan sneakers or a snapback cap. It was about the fans and the artists and the mutually shared love of the music.

A+ for the show and the venue!

You can view more photos of the “Legends” on our Facebook Page!
All photography is credited to Sharon Downing