You are at:Home»Art & Music»Less Than Jake at the Emporium was no less than awesome!
By: Jenn Curtis Kelly on June 14, 2013 Art & Music

Imagine going to a concert and seeing a picture of yourself from over fifteen years ago. Weird scenario to think about? That’s what Less Than Jake’s Chris DeMakes was greeted with tonight at the Emporium in Patchogue. Less than Jake was joined this evening by Hostage Calm, Pentimento, No Good News and Last Great Hero on what promised to be an amazing evening. All five bands lived up to the hype that was expected upon walking into the venue. Fans of all ages filled the crowd and started arriving as Last Great Hero took the stage.

Pentimento took the stage next and by then the crowd had increased quite a bit. The crowd changed from a small group of people where new comers could walk right up to the stage to a large enough group of people for some moshing and crowd surfing to start. The atmosphere of the venue had changed entirely as well. Those who were in attendance were no longer scattered throughout the floor. The majority of fans had made their way to either in front of the stage or to the viewing area near the bar. Intensity had gone up a noticeable amount too, as Pentimento, who are from Buffalo, New York, was playing quite a set and really captivating the audience. A circle pit got started and fans really seemed to be getting into the show. A few individuals even climbed onto the stage to momentarily sing along with Jeramiah Pauly, the band’s lead singer. 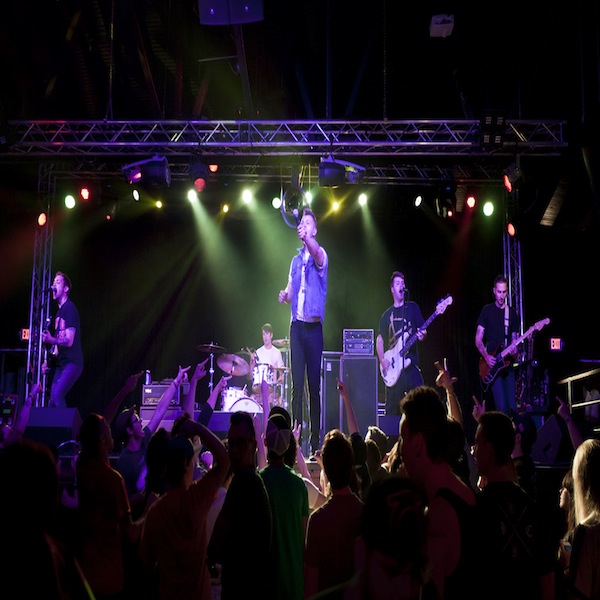 Hostage Calm was up next and the intensity and energy only continued to snowball to bigger and bigger levels –both from culmination of the previous sets and then more throughout Hostage Calm’s set. Security could no longer stand atop the stairs and watch from there. Fans were crowd surfing but because there was no barricade or security up front there was nowhere to go to except onto the stage. Person after person began stage diving into the crowd, who for the most part were doing a good job catching all the people jumping off of the stage. The crowd seemed only to continue growing, as more people came down to the floor to stand in front of the stage and join the pit. Everyone seemed to be having an amazing time and between songs, the excitement for Less Than Jake could be heard among echoing in the room.

“Everyone seemed to be having an amazing time and between songs, the excitement for Less Than Jake could be heard among echoing in the room.”

When Hostage Calm finished their set fans did not disperse the way they had prior; moving one of the many bars found at the Emporium or to the outdoor deck. Instead, they stayed in front of the stage, so as not to lose their places for Less Than Jake’s long awaited set. Many new fans, too, joined the crowd excited to be so close to the stage to see the band. The energy once again began to peak, as fans jumped around all over the place when Less Than Jake finally took the stage. The crowd surfing and stage diving that had taken place up to that point kept being amped up, as still people decided to join in the the revelry. After a few songs, Chris DeMakes noticed that a fan at the front was holding up something for him to see. He took the picture from her hand to see that it was in fact a picture of himself from 1997. He remarked that the picture was from a time when he was much younger and got more attention from the ladies and had most the crowd laughing. The fan wanted her picture back but DeMakes jokingly said he wanted to keep the picture and post it in his profile. He did end up giving the woman her picture back but what a flashback that was for the singer.

The set continued and the crowd was just as rowdy as it had been all night. Surprisingly, or perhaps not so, slowly but surely, fans seemed to be getting even more adventurous still! One fan in particular decided to not only stage dive but to run and do a cannon ball into the crowd. He was not caught and ended up falling pretty hard to the ground but seemed to bounce up just fine. DeMakes joked about the intensity of the fans stage diving saying he’d never seen someone try a cannonball into a pit and that the landing had to hurt quite a bit. Security started taking notice of the potentially dangerous events going on and made their way into the crowd in case they were needed. A few fans continued to do some crazy stage dives, including one young man that decided to flip into the crowd on more than one occasion and luckily was caught each time.

Less Than Jake then began to talk about how awesome the crowd was and how involved and energetic everyone was being in this ‘town on Long Island that they could not pronounce.’ Chris DeMakes attempted to say “Patchogue” a few times with no success before asking the crowd how to say the name and then he got it. Less Than Jake played a phenomenal set that got all of their fans to their feet screaming and singing along. Fans of all ages were at the show, from those still in high school to those who have been following the band since 1992 when it started. Many fans even came out despite having to work tomorrow and having worked that day. It really seemed be a memorable and enjoyable show for all those in attendance!

You can see lots of great photos by photographer, Victoria Finnegan, in this album on the LIB Magazine Facebook page!