You are at:Home»Art & Music»LIB Mixtape: Spotlight on Espo The Truth
By: Kirsten Preskenis Meadow on April 12, 2013 Art & Music

LIB Magazine is in the studio and about to shine a light on some of Long Island’s finest artists. Born from a desire to bring credit to Long Island’s creative music scene, the LIB Mixtape covers multiple genres and features the cutting edge talent of many of your favorite local musicians and producers. 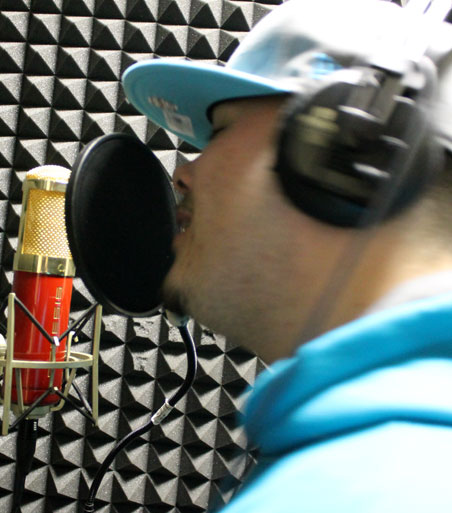 “I want to help open people’s eyes to the talent on Long Island.”
–Espo the Truth

Mike Esposito and I met on a chilly Monday afternoon. Esposito, who goes by “Espo The Truth,” is an aspiring producer and writer. He is the right hand man at Faith Funded Studios, run by Espo’s good friend and fellow artist, Rayonthetrack. Espo also runs his own branch of the studio called, BDS Boys but it is still based out of Faith Funded.

Espo is currently working on a new record to titled “ESPO,” though it is not self-titled per se. In this case the, the young rapper’s artist name will stand for “Every Situation Presents Opportunity.” In addition to his music, Espo also does a weekly webisode series every Tuesday, catchily titled, “Team Truth Tuesdays.”

Espo says that he has been involved with music ever since the 4th grade. Back then, Espo explained, he and Rayonthetrack would get together to hang out and just play instruments together. While all types of hip-hop music influence him, Espo emphasized that his artistry was heavily shaped by the music he grew up with, which included a lot of 50 Cent and Jada Kiss.

Espo’s greatest success was a top hit with Denmark’s, Master E Beats. The song, titled, “One Day at a Time,” was produced over half a year ago and it still immensely popular with Master E Beats’s fan base. Speaking briefly on the slight downside to being the music business, Espo admitted that the work can get discouraging; especially when the payment doesn’t match the time commitment but that “You do it for the love.”

Espo says that his talent gave him his name. Once, when Espo was freestyling at a party, a fan walked up to him and asked his name. He said “Espo” and the fan responded with, “Espo The Truth.” The name stuck and Espo still goes by it to this day. Espo feels that there aren’t a lot of artists in the music industry who represent Long Island.

“I want to help open people’s eyes to the talent on Long Island.”

You can find out more about Espo The Truth and listen to his tracks on his official Soundcloud page. You can also watch “Team Truth Tuesdays” on YouTube.

Note: Be advised the content of the embedded YouTube video included in this article contains some profane language. Watch at your own discretion.