You are at:Home»Art & Music»Lions and tigers and Bears and Motorcycles, oh my!
By: Kira Grunenberg and Lauren Jablonski Kelly on May 17, 2013 Art & Music

“I want to break into the music industry!”

Whenever that statement or one similar to it gets proclaimed to the world, whether by a child or an adult, there tend to be mixed reactions by the general public. Music is something universal and well loved but being one of the notable people or groups that exist in the business of making music is not always the easiest or most well loved dream to pursue. That’s often because of the many ways a person or band can choose to dive into the business and what might work for one does not work for all. It’s about finding the method that works for you and finding a balance in maintaining that method that keeps music fun and friendly in the process.

Long Island might not be the first locale that comes to mind when people think of breaking into “the biz” but that does not mean dreams are not achieved here or that this nearby cousin of the Big Apple lacks talent, because assuming so would be wrong on both counts. Many people get their starts on Long Island and go on to do great things and make great music. One such band whom LIB Magazine is shining the spotlight on today, is Long Island’s own Bears and Motorcycles. 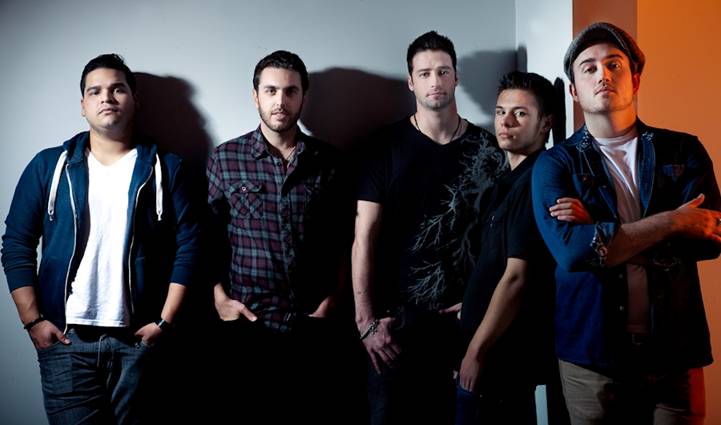 The guys of Bears and Motorcycles!
From left to right: Jeff, Will, Dillon, Jon and Brendan
Photo Credit: Alerte, Carter & Associates

A band barely of one year, formed in summer 2012, this five man group makes music with a definite edge but brings a refreshing dynamic of blues rock and a tinge of soul to their arrangements. This helps them to strongly stand out among the present day sea of “bands with guitars, bass and drums.” In the short time that Jeff Alvarado (bass guitar), Dillon Mealey (vocals, rhythm guitar), Brendan McGrath (lead guitar) Jon Brick (percussion) and Will Mahlan (keys, vocals) have worked together, they have managed to form a memorable identity, craft several unique tracks and put together a self-titled EP, (available for FREE download!) which was just released on the first of this year!

Despite their neophyte status, not only do the five gentlemen of this group play with what feels like the solidity of seasoned pros, they are also able to back up this initial impression with widely recognized appreciation. Recently crowned the winners of this year’s Break Contest, the local blues rock quintet has earned the opportunity to play on the Main Stage at the Skate and Surf Festival, featuring the newly reunited Fall Out Boy and virally-popular Macklemore and Ryan Lewis, going on this weekend at Six Flags Great Adventure in New Jersey.

Take a listen to the lyric video below for “When It Comes to Getting Down,” the lead track off their self-titled EP!

“A band barely of one year…this five man group makes music with a definite edge but brings a refreshing dynamic of blues rock and a tinge of soul to their arrangements. This helps them to strongly stand out among the present day sea of ‘bands with guitars, bass and drums’.”

LIB had the chance to talk with the guys of Bears and Motorcycles prior to their upcoming Skate and Surf performance set for this Sunday, May 19. Keep reading to hear about their thoughts on the Break Contest, the lineups for Skate and Surf and even some of the guys’ choice hangouts on the island!

LIB: How does it feel to be the Break Contest winners?

Dillon: Winning this contest is like a dream come true. Our band was confident in our talent and ability, but having only played for a few months prior, and our first contest appearance being our second show, I was nervous. However I couldn’t have asked to be with a better group of guys who can lay down an incredible show on a nightly basis. Winning this contest and playing the same stage as some of my childhood idols is an incredible feeling.

Jeff: It feels unbelievable. It’s a great opportunity that has lead us to share the stage with some incredible bands that we listened to growing up.

Jon: It feels amazing to have won the contest and be given these opportunities. Feels surreal

Brendan: Winning this only solidifies my faith even more in this band. We are going to keep this fire burning.

Will: It’s really exciting and definitely an accomplishment.

LIB: Who is your favorite band you are playing Skate and Surf with?

Will: Macklemore! I want to meet him!

Jeff: Theres no favorite for me, theres an incredible line up of bands that I listened to at different parts and had major influences on me.

Brendan: I grew up listening to Glassjaw, Saves the Day, Bayside, and RX Bandits over the past 10 years. Those bands are unreal and their records will always hold a place in my heart.

LIB: Do you have any upcoming shows on LI?

Dillon: We’re playing the Montauk Music Festival (today) @ 10pm, and have several other shows in the works, we also have a college tour in the works (very excited for that).

Brendan: After Montauk and Skate and Surf I believe our next show is June 14th at the Brickhouse Brewery in Patchogue, NY.

Jon: We have some in June and will be booking through the summer , so watch our Facebook page for updates.

LIB: What bands/singers have influenced your sound?

Brendan: I listen to such a variety of music it is hard to answer that question. Artists usually inspire the reasoning behind why I continue make music. Bob Marley has had a huge impact on the reasons why I want to share our music with the world. His messages of love & despair are timeless

Jon: Black Keys, Incubus, the Beatles, Rage Against the Machine

Jeff: ...for me personally bands that had influenced my bass playing would be Red Hot Chili Peppers, Incubus, Kings of Leon, Foo Fighters, Black Keys, Circa Survive.

Will: Jimi Hendrix taught me how to improvise. A lot of classic rock influences like the Doors. Blues artists like Otis Spann, B.B. King, Willie Dixon

Dillon: I think a lot of classic and acid rock of the 60’s and 70’s have a definite influence on our sound, we have very heavy underlying blues tone as well. Artists like Muddy Waters, Howlin’ Wolf, Led Zeppelin, The Who, all have influence on my songwriting and stylistic preferences, but newer artists have also influenced me as a musician including Kings of Leon, The Black Keys and The Heavy.

LIB: What are your favorite local spots on LI?

Jeff: I would say one of my favorite places to jam at has been the Revolution bar in Amityville

Will: I like to chill at The Cup Coffeehouse in Wantagh. I play open mics there a lot

Jon: Favorite local spots would [have to] be Brickhouse Brewery, Revolution bar and 89 North which we have yet to play but soon will!

Brendan: Go to The Leaky Lifeboat in Seaford. Spot is legit

Dillon: I moved down to the island from Rochester several months ago, so I haven’t really got a chance to fully immerse myself in the culture down here. I really love the beach and the ocean, so whenever I get the opportunity, I’ll head out!

LIB: It’s been awesome getting to know you guys! All the best for your set!

Bears and Motorcycles will be performing on Sunday, May 19, from 2:05-2:35PM at the Main Stage. For more information on the Skate and Surf Festival, see the official website.

You can stay in the loop with all of the latest from Bears and Motorcycles through these channels: