There’s no scientific law written down, which defines that mental phenomenon when a person feels time go much slower prior to doing something or arriving somewhere special and then conversely feels time resume normal speed or even feel accelerated once the place or event in question has been left behind them. Nonetheless, it would probably be a fair assessment to say that everyone has had at least once situation in their lives that put them through this state. Common examples?

The last day of school

Just about any major holiday involving time off

This past Saturday was none of those for this writer but, all the same, inspired just as much anticipation. It was Record Store Day.

If you had the opportunity to read the very thorough and insightful interview given by Karl Jr. of Looney Tunes in West Babylon, NY, (posted here,) then you might understand why someone like myself, who is surrounded by music nearly all of the time, would be so excited about a day focused on the independent music community, rare finds and just a little bit of consumer competition…

Record Store Day itself, is just like any other. What makes it more exciting for some than others, is dependent on how many exclusive releases one is looking to purchase and how early one is willing to wake up and get to their nearest independent store. It would not be out of the realm of reasonable thinking, to believe with Manhattan and Brooklyn so close, that the offerings of Long Island’s few remaining music shops would have a heavily truncated shipment of sought after cuts. Reality could not be farther from this assumption. 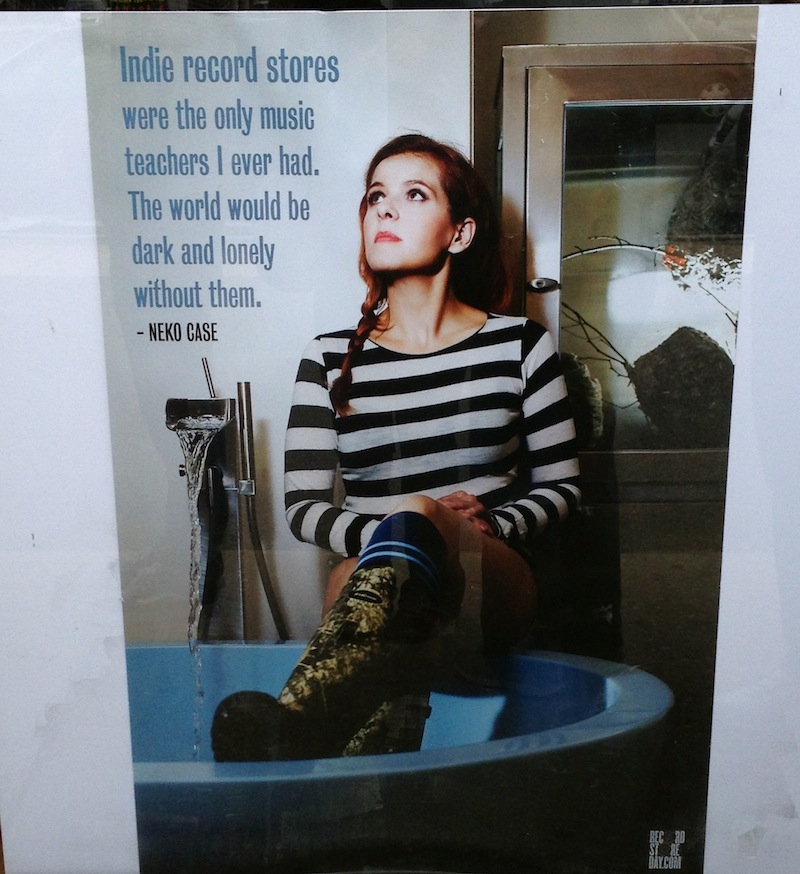 Boasting the “Largest selection [of exclusive Record Store Day releases] in New York State,” innocent little Looney Tunes on unassuming little Brookvale Avenue, neighbor to a shopping center hosting everything from food, to home goods, party supplies and shoes, had a line going out the door and down the length of the mini strip that houses a few other business. It was clear, even as the public opening time of 10AM came and went, that no one would be stopping to partake in the products or services of these other establishments before they got their desired records. Of course, seeing the next door over, a Chinese food establishment, open its door at 10:05AM… Not giving kudos to that business owner for taking advantage of a chilly (and probably hunger-filled) situation wherein people are forced to wait on a long line… that would just be wrong because doing so was a brilliant move.

Personal experience saw that I waited about a full hour before entering the store and although the brisk wind made the wait slightly unpleasant, the thought of being able to take my time and enjoy my shopping experience once my turn to enter came, made things more tolerable. The store itself was irrefutably packed, though waiting in the line paid off, as there was at least space to navigate the aisles and truly browse for “unplanned purchases” if one so chose after racing to pick up the limited items first. I imagine without the line the store would have fallen into madness of claustrophobic proportions. The last few images gracing customers’ eyes before going in were that of the legendary Jimi Hendrix during a visit to the very recently closed Bleeker Bob’s in the East Village of Manhattan and that of singer-songwriter, Neko Case, with a quote that drives home the invaluable power of independent music stores, seen in the above photo.

Right upon entering, some of the most sought-after, (and simultaneously expensive) releases, like Cream’s Royal Albert Hall London May 2-3-5-6 and Emerson, Lake and Palmer’s First Five: A Picture Disc Collection, (pictured in the slideshow to the right) greeted myself and others, from a lofty top shelf spot; almost as if to declare, “We are Record Store Day’s utmost rare. Purchase us if you have the courage!” People wove in and out of aisles with relative ease and a provision of good manners. There were moments it might be difficult to tell if an individual was stationary because they were already on line to pay, because they were browsing with their eyes or because they were contemplating a conflicted pair of albums. It is fun to spontaneously discuss different tastes and hopeful buys with other customers but there’s also something to be said about not wanting to disturb another music lover while they are in their “zone” and trying to sort out what they want most, among what it likely a long, mental wish list.

“It would not be out of the realm of reasonable thinking, to believe with Manhattan and Brooklyn so close, that the offerings of Long Island’s few remaining music shops would have a heavily truncated shipment of sought after cuts. Reality could not be farther from this assumption.”

Fortunately, the latter was not an issue for me and even better, I did start a conversation with one very engaging gentleman by the name of Dave, who stood behind me and was seen holding a hybrid stack of vinyl and CDs; with his vinyl being of varying sizes, colors and stages of use. We exchanged what our aspirations had been coming into the store, finding out that both of us had seen one of our “choice picks” walk right out the door in the arms of other customers. Making things even more interesting, it turned out Dave and I had each thought to go after a different artist’s jazz album from a pair released by the same label. One by the Cal Tjader Trio and one by the Dave Brubeck Trio for him and myself respectively.

Dave (the cutomer) told me his stack was comprised of things from today that he wanted, as well as a collection of albums he had been wanting to buy but waited on for the duration of a full year! That might sound crazy pricey, and to a degree it was, but Dave’s “strategy” for absorbing the costs makes preparing the funds seem like a piece of cake! I may even consider trying this method to start prepping for 2014. A dollar a day and that will get a person a lot of vinyl next April!

”A lot of it is the leftovers from my coin jar. I just put a little in it at the end of every day and before you know it, you can end up with a couple hundred dollars to spend on music.”

Though it can be easy, in an amply stocked shop like Looney Tunes, to find oneself lapping the store repeatedly while thumbing through their shelves upon shelves of discs, (think back to another relic of the past, the library card catalog!) my visit was very mission oriented and had minimal “ad lib browsing,” as the energy of the store, despite being a positive one, overrode my ability to find pleasure in staying long.

The final chat and encounter everyone had before paying, was with one gentleman on Looney Tunes’s staff, assigned with the task of separating cash payers and credit payers, as well as checking all purchases for doubles. In order to keep things fair, the store had a strict “one per customer” limit on anything exclusive being purchased that day. The rule itself seems unreasonable at first. If a person has the money to properly buy, what’s the problem? It is the disappointing existence of “record flippers,” who hoard rare products, to be inevitably re-sold at painfully inflated prices online, as to why such stipulations exist. Still, when thought of as an stipulation striving toward consumer fairness, getting your “one copy” does not feel like as much of a punishment.

All in all, record store day has its corporate-esque moments, what with the hustling in and out of the store but it is a day to be relished and loved by anyone who will partake and as the team at Looney Tunes stresses to their visitors, “Every day is record store day.”

You can see more photos taken inside (and outside!) Looney Tunes on the morning of Record Store Day over at our Facebook Page!