You are at:Home»Art & Music»Longing for Local Music? Look to the Montauk Skyline.
By: Audrey Rome Meadow on November 20, 2012 Art & Music

Are you looking to escape the pop music scene but don’t know where to start? Are your ears craving unique songs with heartfelt lyrics by local musicians? The five guys in hardcore band Montauk Skyline rehearse close to home and specialize in music that will be close to your heart.

Montauk Skyline consists of five songwriting perfectionists: Jonnie Rosario, 24; Jimm Canatella, 21; John McGrath, 22; Matt Rooney, 24 and Ray Slavick, 18. Don’t let their young ages fool you – these guys are serious about their art and even more serious about giving the Long Island music scene something to look forward to.

We were fortunate to get to know these talented and creative musicians with a Q&A session featuring three of the five members: Jonnie, lead singer; Matt, lead guitar; and Ray, drums. The Long Island quintet plans on making more frequent appearances throughout local venues once they are completely satisfied with their original compositions. 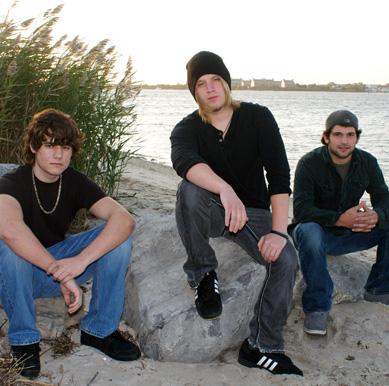 LIB: I love that your band name is a tribute to Long Island. How do you plan on catering to Long Island fans in particular that makes them feel more connected to you than bands from elsewhere?

Jonnie: When the fans from LI listen to us and know we’re from LI, there’s automatically a sense that we know what they’re talking about and we come from the same thing… there’s definitely little subtle things [about Long Island] in the lyrical content. The music lyrically is very oceanic.

LIB: Was your band name inspired by an actual view of the Montauk Skyline?

Jonnie: I was just staring at the Montauk skyline. We were sitting around a bonfire and shooting names around… we didn’t want to fit the cliché of being a heavy metal band. We listen to hip-hop, reggae and stuff like that. We play hardcore music. The name is essentially the idea that Montauk, to people on Long Island, is the end. It’s paying homage to Long Island.

LIB: Where did you guys meet and how did you start playing music together?

Jonnie: Matt and I had played in bands together before, and we started messing around with acoustic stuff. Nothing was serious; we just started off by jamming. “Scars and Sunrise” was the name of my solo project. Matt was just involved doing harmonies on guitar, but really we ended up doing heavy music with the five of us all together.

Matt: We knew [our friend] Caitlin had a brother who had drumming experience, and that’s how we got Ray.

Ray: She told them that I played drums for a long time, which was a complete lie. I actually learned to play drums just by playing the video game Rock Band. My cousin lent me a drum set to start practicing on and I started playing. Actually, if you compare Rock Band to guitar, it’s 100% different… but drums are similar because you’re just beating on something and practicing timing. I used to play tuba, so I had some musical sense in me.

Jonnie: For the most part, the three of us were the founding members of the band. I surfed with a guy named John and someone mentioned to me that he played bass. We knew we needed another guitarist when things got serious. Jimm came and that’s how we got started.

LIB: Who writes most of the music? What is the writing process?

Jonnie: For the most part, Matt will write a guitar riff and play it two weeks before. He takes music and mixes pieces, and when they actually have some substance I’ll put lyrics or start singing a poem I wrote. Then Ray will start playing drums. It’s a real collective effort.

Matt: Everyone has the responsibility of [writing parts]. We’re definitely all very involved.

LIB: Who are some of your greatest musical influences?

Ray: I’m younger than these guys, so my music of choice was System of a Down while growing up. Now I listen to Parkway Drive, Asking Alexandria… it ranges. I listen to a lot of classic rock.

I want this project to go as far as it can go. People play covers and get excited, but that doesn’t tickle my fancy. The art that we create… I want that to be my legacy.
-Matt

LIB: As a songwriter, I know that it’s very difficult to write something without feeling like it’s already been done. What are your biggest inspirations for creativity?

Jonnie: I don’t worry so much about sounding like other bands. As long as the music is from your heart, it will be unique no matter what. Music will always keep changing, but the only way it’s done is by staying honest… just keep loving it.

Matt: Inspiration is definitely a big factor. Whatever sounds good – just go with it. As long as it grooves well and you’re changing it up… in music, there’s only so many ways you can mix it up. It’s infinite, but not really. It helps if you don’t listen to current music too much.

LIB: How do you prepare for your rehearsals and songwriting sessions?

Matt: Video games! We try to get ready for music by doing things that don’t involve music.

LIB: Are you signed to a record label or are you trying to get signed with a particular label?

Jonnie: We’re still a new band and at a point where we’re not really interested. We want to make sure that this time around (Matt and I were in a band before), it’s a good representation of what we are. It’s not something I think we need to worry about right now. We need more substance first.

LIB: What are some of your favorite places on Long Island, and have any songs been inspired by these places?

Jonnie: For me, it’s mostly surf spots. I love, obviously, Montauk… but just heading out east to different beaches. Some of us surf; we’re really oceanic. We hang out a lot on Main Street in Patchogue. You’ll catch us at Dave & Busters on Friday nights. Shout out to Wings & Things! We’re actually bonfire people. We throw huge house parties with bonfires and stuff like that.

LIB: What are some of your personal goals as musicians?

Jonnie: I, at the end of the line, would like to know that I put all of myself into my music. I would like to make money by playing music and be able to live [off of] my greatest hobby and calling. I would like to start adding vocal harmonies to our music.

Matt: I want this project to go as far as it can go. People play covers and get excited, but that doesn’t tickle my fancy. The art that we create… I want that to be my legacy.

Ray: I would love for this to be my job and leave a legacy. This is what we do and how we do it. Right now I’m a major in biology and I’d like to take some time off from school and go on tour… that’d be awesome. I go to school full time.

LIB: Can we see you perform anytime soon?

Jonnie: Right now, everything that Montauk Skyline’s doing is super creative. Everything is just going into writing, recording, and producing. We’re really a bunch of perfectionists, so it takes a lot for us to get everything done. We’re just focusing on writing.

LIB: How can we get a sneak preview of your music before you put out a full-length record and start performing more frequently?