“North” is the first fully original album from Matchbox Twenty in 10 years. Though their last record, “Exile on Mainstream,” (2007) had about an EP’s worth of new material, in hindsight, the wait for this new project still feels long and makes the pressure not to come back as “that 90s band” even greater.

In a single sum up statement: The band crushes this potential outcome with variety of multiple dimensions but especially at the production level, with the incorporation of material from three entirely different recording studios across the country. Ironically, this display of range is probably the only weakness, as the album lacks some flow due to less connective track-to-track cohesion. The bands longevity and existing reputation is what allows for this leeway.

Currently on a winter tour to promote and pump up “North,” Matchbox Twenty stopped off at Huntington’s venue gem, the Paramount, this past weekend –proving once again that Long Island is becoming a piece of serious and worthy piece of touring real estate, even with places like the Highline Ballroom, Mercury Lounge, Webster Hall and Madison Square Garden right nearby.

While live sets can run the gamut of a band’s catalog, you can read a complete track-by-track review of “North” here and check out some gripping photos from the Paramount’s show.

Opening with crisp, clean, alternating guitar notes beside Rob Thomas singing sad lines like,“When it felt so good, you knew it couldn’t last / When all too soon the end was gonna come without a warning and you had to just go home” that sets the visual for something quiet and easy in real life; like a night time highway drive or, for use in the fictional world, a drawn out but inevitable break up scene –tears and painful embracing included.

Not long before the minute mark though, this delicate intro starts to disassemble with the addition of each new band piece that drops in behind the now harmonized vocals: first drums, bass and strings, then rhythm guitar and the crash of a high hat… This almost orchestral-type build up mirrors the lyrical and emotional intensity accumulating in the song’s narrative at each proclamation of the chorus: “Oh no, there’s so much more that you need to work out. / Oh no, you don’t want that parade to leave you now…” The feel is sometimes very classic Matchbox Twenty but a simultaneous freshness rings out, with effect choices that run analogous to alt. rock colleagues, Switchfoot.

The tongue-in-cheek, question and answer combination of this “girlfriend gone wrong” tune has the slickness and self-confident attitude of Matchbox hits past. It is not hard to understand the reasoning behind making this the lead single for the record, as the catchy and whiplash-like character to parts of the melody, which are exacerbated by a solid slap bass, create immediate tension that only wanes by singing along. “She’s an uptown, get around, anything goes girl, girl. / She’s a hardcore, candy store, gimmie-some-more girl.” It is interesting to hear that despite reaching new life milestones in the last decade, the band doesn’t lose their perspective, or ability to write with electric appeal, about the trials and tribulations of more reckless dating life. 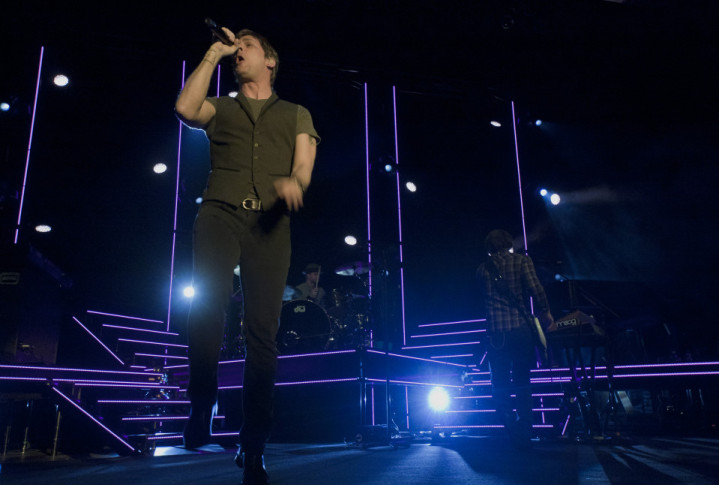 Overjoyed
Showing their rocking colors early on, track three wraps up the first 25% pulling back from slapstick and sarcasm, returning to straightforward sweetness, via an acoustic guitar and some tried and true prose that is all about being a person’s one and only. “And if you want, we’ll share this life. / Anytime you need a friend I’m gonna be by your side. / When nobody understand you, well I do.” Not the most lyrically shocking thus far but a pleasant, radio-friendly ballad (approximately three minutes or less) all the same.

Put Your Hands Up

This very upbeat track is practically begging to be a radio single or party hit with a title such as this. The instrumentation and primary rhythm have a level of recallable similarity to the popular single “Move Along” by the All-American Rejects that further reinforces this appeal –especially the amount of attack put on every hit of the snare drum and the high frequency filtering put on top of the vocals. Still, don’t be scared off by this very aggressive-sounding description. The song is very polished and stands on its own with an unusual but refined and controlled assortment of “normal” instruments. Touches of synthesizer beats give it just a dash of indie pop flavor a la early MGMT. The second things start, the track grabs the beat and doesn’t let go but, it is not so loud or melodically bombastic that it becomes an “skip over” on your personal music device.

“You’re like a little piece of kerosene” is part of a line in the very first verse of this couples-fueled track and fuel is certainly an appropriate association. “Our Song” takes off like a rocket, making what was just thought of as party-level energy one track ago, now seem lethargic by comparison. This is most likely due to the constant, uniform and rapid tapping underneath the main melody. Syncopated claps, varied short-long-short breaks and an eight note guitar motif reminiscent of the rock classic “Jessie’s Girl” give a rather juvenile concept some sophisticated maturity.

After two spitfire songs, Thomas breaks out the acoustic again and the simplicity of this track’s arrangement (mostly acoustic guitars, piano and doubled but non-drastically altered vocals,) brings to mind qualities of a lullaby and, from a technical standpoint, something nearly to the nature of the Plain White T’s “Rhythm of Love.” However, with Matchbox Twenty’s personal touches, (like the re-introduction of tender cello and the group’s unique voices,) the song gets lifted out from of any potential band’s shadow, onto a separate tier. This probably comes from the unspoken understanding that no new band can replicate; coming only from working together as long and closely as Matchbox Twenty has.

The album seems to take a definitively somber turn with this song. The arrangement and instrument choices, as well as each of the latter’s specific placement in the mix, bestow a sense of allure, intrigue and the slightest inkling of danger. “Cause everybody wants to get away sometimes / and everybody needs mistakes. / When the sun breaks over the edge of an English town, it pulls me awake from a bad dream / I don’t know why but I know I’m not ever going back.” Instrumental complexity has taken a firmer root as well. The rock guitars are there, showing different colors that now resemble the anthemic quality of Muse but the cello, trumpets and upper strings have support parts more prominent than before. As with “Put Your Hands Up,” don’t be fooled into thinking this is a downer of a listen solely from this worded description. It is tinted to be somber but only just enough to push the “cool factor” up and to get things off of the path of predictability.

The band crushes this potential outcome with variety of multiple dimensions but especially at the production level, with the incorporation of material from three entirely different recording studios across the country.

How Long
The Baroque-esque start and ongoing melodic hook with harpsichord and cleanly recorded piano… At first, seems like a song that wouldn’t fit Matchbox Twenty’s array of accepted styles. However, this absolutely shows the range of recording results they achieved from working in the three unique studio environments (Nashville, LA, New York) The oscillating synth sounds interwoven with a basic drum and bass beat in four make this track truly a front runner for “most eclectic” on the album. The strange combinations don’t feel like they should work as well together as they do but there are other musicians that pull these kinds of blends off well (e.g. No Doubt.) As long as one doesn’t get too hung up on the fact that such a strategy is atypical territory for Matchbox Twenty, then what one is left with is a highly enjoyable, quirky track, that somehow seems easily imagined into an equally quirky music video sequence.

This song has a concrete 50s vibe in mind: swinging rock feel, much more emphasis on the bass and core beat. The main rhythm changes from verse to chorus but the general swinging feel could be said of either part. The rhythmic choice, insertion of a big band motif and lyrics like, “There’s a Motown girl in the parking lot / shaking off her dress with everything she’s got” illustrate the point clearly. (Though it’s not hard to also feel the compulsion to sing a line from the Doobie Brothers “Black Water” at the first few seconds of play.) Occasionally, Thomas’s vocals even seems to take on a drop of Elvis’s swagger. What’s most impressive and likeable about this track is that Matchbox Twenty takes a very era-distinctive style and blends it with their own expected pop-rock, so it doesn’t sound as if the band has lazily thrown itself into a cookie cutter of a time machine.

Lead/Rhythm guitar player, Kyle Cook, takes the vocal spotlight with this song and the simple change in voice adds another dimension and method of modification to the album’s already large compilation of styles, instruments and recording methods. Cook’s voice has a clarity and snappiness of its own but he sounds just as “right” in the lead spot singing the band’s songs as Thomas does. The overall feel of the track doesn’t stray from the band’s more comfortable style and songwriting formula, so on that end, it isn’t as groundbreaking. That said, sometimes less change is more and “The Way” is unique enough with Cook at the helm.

Another somewhat minor tune but, rather than being somber or depressing to listen to, it exudes an assertive and lyrically-suave tone; a mindset not difficult to achieve with lines like, “I just wanna make you go away / but you taste like sugar / Girl you taste like sugar. ” The instrumental and vocal delivery both have a dripping, tone-bending quality, adding to the metaphor of sweet sensuality, which is contrasted nicely by regular, precise drum hits. The whole attitude and tonal styling of the track seems to resonate with pieces of Paula Abdul’s aesthetic from the mid-late 90s. As always, Thomas conveys the slight bad-boy persona with tasteful skill.

Sleeping at the Wheel

The band closes out the album with a quieter, more serious work and its image-heavy lyrics implant the idea that this song is destined to creep up and explode before the end with a declarative and self-affirming refrain: “So come on, come on, it’s all we’ve got. / Our hands are full, our lives are not. / The loose affiliation with the real / We’re sleeping at the wheel.” Surprisingly, the song never hits that expected obvious “breakdown moment” where one would expect a massive crash of drums rolls and power chords. (solidifying that the song would end up in a future movie climax scene.) Still, the retaining of calmness and the more mature, contemplative message doesn’t hurt as a finisher. The listener is reminded these are artists full of gratifying life experience, who are able to create music beyond the bubble of cheap romance and phoned-in form.