You are at:Home»Sports»New Ducks pitching coach Marty Janzen guides the Flock
By: Gregory Giaconelli on May 26, 2015 Sports

The old saying in baseball goes: Pitching wins you championships. For the Long Island Ducks, they have plenty of hurlers to choose from. With first year pitching coach Marty Janzen at the helm, he looks forward to working with a dedicated and strong staff. 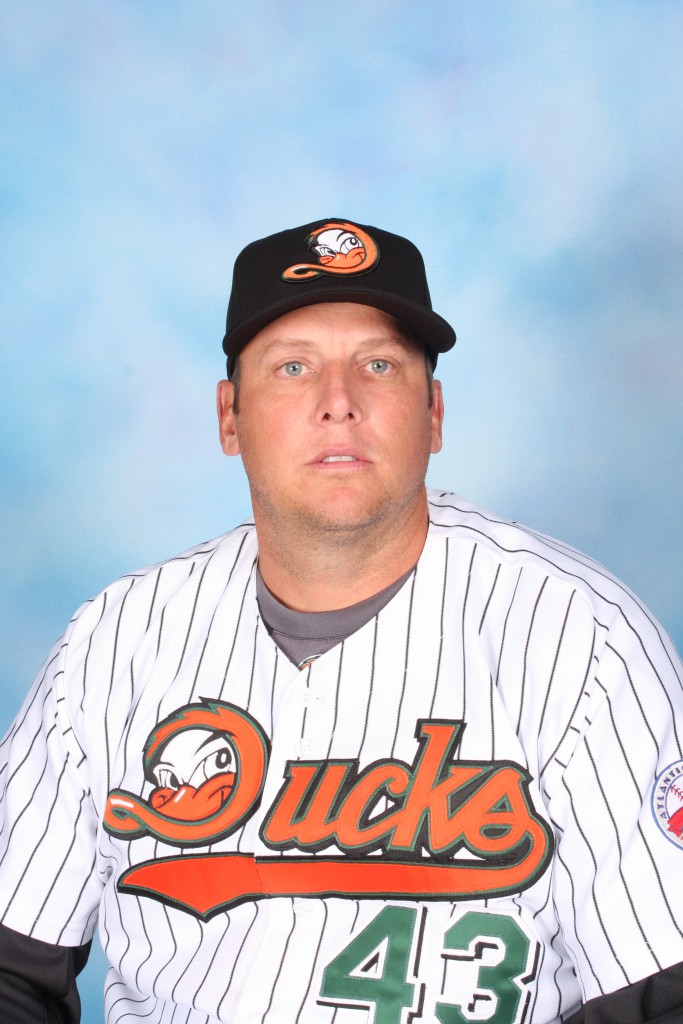 Janzen is ready to help add his experience of the game to an already successful ball club in his first season on Long Island. Janzen also praised both Manager Kevin Baez and Assistant Coach Bud Harrelson.

“I have nothing but good things to say” said Janzen. “They’re both great guys. It’s enjoyable to come to the ball field everyday as well as with the team itself.”

With both Major League and Atlantic League experience, Janzen is no stranger to managing a pitching staff. In 2010, he guided the Southern Maryland Blue Crabs staff to a playoff spot and posted a league best 3.58 ERA. From 2011-13, Janzen found more success with the Lancaster Barnstormers. With the Barnstormers, the team would qualify for the postseason in 2011 and 2012. They earned a league best 3.60 ERA and won the Freedom Division Championship in 2012.  Now, Janzen begins his first season with the Ducks and looks to use his wealth of experience in the Atlantic League to help them reach the postseason.

“I’m having a blast here!” said Janzen. “I’ve coached against them, played against them and seen them win championships on the field both as a player and a coach. So I guess they say if you can’t beat them, join them.”

The Ducks rotation is spearheaded by the three headed monsters of John Brownell, Ian Marshall and Mark Rogers. Brownell enters his fourth year as a Duck and looks to build on his historic 2014 year. Last year, the team ace broke franchise records with 29 games started and 202 innings pitched. Brownell is 3-1 with a 2.67 ERA.  He started in five games with 33.2 innings of work, 9 walks and 22 strikeouts.

Ian Marshall begins his first year on Long Island. Marshall spend the last two seasons with the Southern Maryland Blue Crabs. He earned a spot in the Atlantic League All Star game last season, where he was 10-10 with a 4.09 ERA and 156.1 innings pitched in 27 starts. With the Ducks, he’s 2-0 in four starts with a 2.57 ERA. Marshall pitched 21 innings, struck out 12 and walked four.

Then there’s Mark Rogers, whose brings another batch of Major and Atlantic League experience to the table. His first season in the Atlantic League was with the Barnstormers, where the former Milwaukee Brewer went 5-6 with a 4.17 ERA in 18 starts. Rogers is now in his first year with the Ducks. So far he is 1-2 with an ERA of 5.94 and has started in five games. In 19.2 innings pitched, the hurler walked 13 batters and struck out 18 thus far.

“Obviously you want three workhorses in your rotation and they are that” said Janzen. “It takes a burden off the bullpen. They’re guys that go deep in the game.”

In the bullpen, there are a plethora of relievers to choose from. Patrick Crider, Frank DeJiulio Jr., Amalio Diaz, Carmine Giardina, Bruce Kern, Matt Soren and Nick Struck all enter their first season in Long Island and look to help the Ducks return to the playoffs.

The only two pitchers from the bullpen to return from last year’s squad are southpaw Tommy Organ and righty specialist Sergio Perez. Both pitchers were late season additions who found success out of the pen and look to continue that success with Long Island. Perez, who was reinstated to the active list on May 14, boost a microscopic 1.35 ERA. In 6.2 innings pitched, he struck out six, walked two and allowed five hits in three games this season. As of May 20, Organ earned his first win in a solid performance. The lefty went one inning and allowed one run off two hits and walked a batter while fanning two.  His ERA is 5.90 and he has 10 strikeouts, allowing five walks and 18 hits in 10.2 innings. Organ has appeared in 12 games this season.

One pitcher looking to make that transition from the bullpen to the rotation is another left handed pitcher, Eric Niesen. The fourth year Duck set a career high and team best 59 appearances from last year’s campaign. This year, Niesen started in four games and has gone 1-2 with a 5.90 ERA in 21.1 innings pitched. He allowed 13 walks and struck out 23 batters.

“They’ve done a great job” said Janzen. “Everyone has stepped up and kept us in ball games. That’s what you ask for from a staff.”

Perhaps one player who stands out from the bullpen and has been sensational in his first year in Long Island is new closer Ryan Kussmaul. In 10 games so far, Kussmaul has an impressive 2.31 ERA and seven saves. In 11.2 innings, the hard throwing righty allowed nine hits, while walking nine and striking out nine batters.

“His numbers speak for itself” said Janzen. “You want a guy that’s fierce and shuts the door on them.”

As Janzen has done in the past, he looks forward to the challenge of leading another impressive pitching staff to a championship. With the Ducks at 14-12 and sitting 3.5 games back in the Liberty Division, they will look to their pitching staff to keep them competitive in a long grueling season. In baseball, you can never have too much pitching.