You are at:Home»Recent Events»Nico Tortorella’s Key Takeaway from Her Conference
By: Lauren Jablonski on July 24, 2018 Recent Events

When Nico Tortorella was invited to be a keynote speaker at Her Conference, a career development event for college women and recent graduates, he asked himself “Why me? I am not a traditional “her.” Even Tortorella’s partner, Bethany Meyers initial reaction was, “how dare the Her Conference invite you to speak, let alone keynote.” Tortorella’s mom responded with, “I can deal with your sexuality but why must you always take it to the next level,” which was not surprising since they are known for having a complex relationship. She even boldly asked Nico, “Just fucking tell me, are you Caitlin Jenner?” Despite the negative feedback from Tortorella’s closest support systems, that just made Tortorella to want to do it more.

Tortorella entered the venue wearing a sailor hat embroidered with his book title All of It Is You, Men’s pride Kam sneakers from Kenneth Cole New York, silver metallic nail polish and a white sheer floor length negligee with a white denim jacket and pants, it was evident Tortorella was there to make a statement. The millennial women in the audience got schooled in gender and philosophy from Tortorella who’s redefining sexuality, gender norms and living beyond labels. 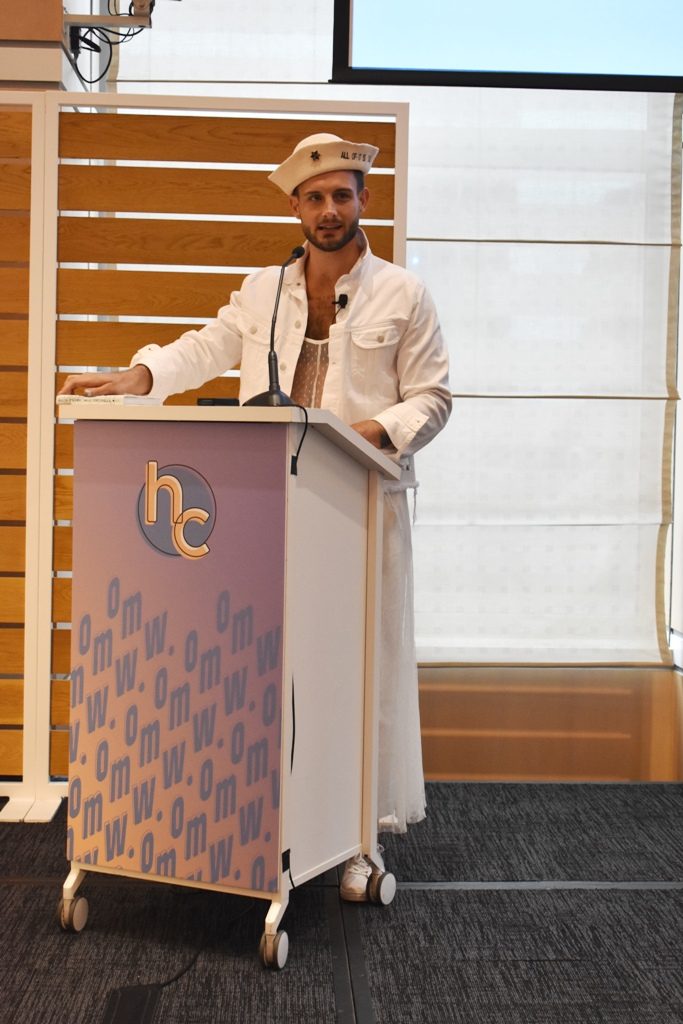 Tortorella is never afraid push the boundaries, Nico was the first gender non-conforming person to wear a Christian Siriano gown on the red carpet at the GLAAD awards. “I wear a dress as a form of protest. This is beyond my gender identity, this is political. I wear this dress because I can. Because of my platform, my celebrity and what I look like […] I wear a dress for every kid out there who ever felt like their femme didn’t belong. For every kid that was contemplating suicide because they didn’t see a version of themselves in mainstream media. I wear this dress for myself second and everyone else first,” said Tortorella as his eyes brimmed with tears filled with passionate conviction.

Since Millennials are considered to be the most diverse, progressive and open-minded generation, this was a perfect audience for Tortorella to preach his agenda. The hit TV show Younger, which Nico described as a “Lizzie McGuire Sex and the City mashup,” transformed Tortorella into a Hollywood heartthrob. “Younger is on in 170+ different countries and I am known around the world as a super straight, super cis, super white bro,” stated Tortorella. “It makes my activism, advocacy, and messaging on the LGBTQIAPK+ community that much more easily digestible. Whether we like it or not that is a privilege the system has allotted me. A privilege that got me the invite to speak at this conference here today,” said Tortorella.

Millennials are pushing for equality and aren’t afraid to face and confront racial, class and gender disparities. Many are accepting of the LGBTQIAPK+ community and they aren’t worried to speak up about controversial topics. “Every day younger generations are rewriting terminology for identity and expression; I can’t help but beam with pride. This isn’t a new fad; this is the reawakening of what has always been through the social media revolution,” said Tortorella.

Tortorella encouraged the women in the audience to use their voice and influence to make a positive difference in the world. “If you have a body that is deemed more socially acceptable than others, stand up for the ones in need. If you are white, scream against systemic racism. If you are an American citizen, stand up for undocumented people. Stand up for the indigenous, the poor, the Black, the Trans, the you, the me, the us,” incited Tortorella. 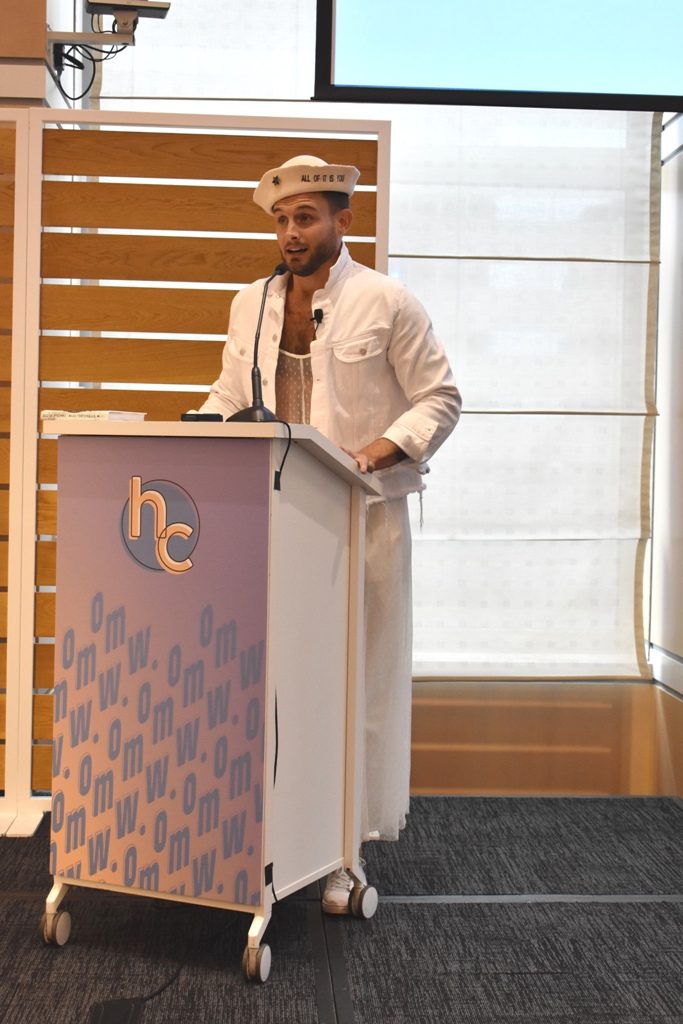 Tortorella recognized and supported women’s empowerment and gender inequality, by stating, “It is no secret that the patriarchy, the brute force of masculine energy, is the dominant force on this planet today. But that hasn’t always been the case. Thousands of years ago, the feminine reigned supreme. However, the feminine spirit is rising again.”

Tortorella believes there should be a better way of addressing discrimination faced by women without dividing us into two opposing groups. Nico believes the binary is the reason why we’re so divided. Tortorella’s call to action was “not [to]fight this issue, but correct the imbalance, the sooner we will have some love based social order in this world.” Tortorella even read the lyrics to the Whitney Houston song “I’m Every Woman” by interchanging woman with human.

Tortorella ended his keynote with:

Love all. Because all of it is worth celebrating.

Because all of it.