You are at:Home»Nightlife»Nothing will hold back the Hamptons from celebrating Memorial Day!
By: Briana Phillips Kelly on May 22, 2013 Nightlife

There are many popular summer destinations all over the world but summer in the Hamptons is like no other. The beautiful stretches of beaches down Dune Road, the charming little towns dotting the main roads and the vivacious nightlife…all of this being in one area allows the Hamptons to offer something for everyone who visits. Though a popular getaway destination for a significant portion of the year, the Hamptons biggest dates are those in its “opening weekend,” around Memorial Day. This is the weekend when people from both eastern and western Long Island come together to usher in the craziest, most extravagant introduction to summer.

When it comes to the younger scene and east end nightlife, most of what lies the Hampton’s is centered in or around the town of Hampton Bays. It is easily accessible from both the Sunrise Highway and the Long Island Expressway. There is also a central train station and plenty of taxi service.

This Friday, May 24, is the official kick-off to Memorial Day weekend. A Friday night at Beach Bar is a sure way to dance off the day’s sand. You can find it at 58 Foster Avenue in Hampton Bays. One of Beach Bar’s best attributes is its extremely large outdoor deck. DJ’s are often spinning tracks and with multiple bars located indoors as well as on the deck, Beach Bar makes for a great place for an impromptu get together with friends to get a drink. The dress code is also casual, which makes it an ideal place to go after a long day at the beach.

Logically, out of each of the weekend nights, Saturday is the busiest of the weekend. When it comes to the official weekend of summer, it’s only right to celebrate it at the ultimate Saturday club. During the day, you can catch some tan, some tunes, and some drinks at Neptune Beach Club, located at 70 Dune Road in East Quogue. You can walk right off of the beach in your bikini or swim trunks and right onto the dance floor of Neptune’s. Famous DJ’s from all over the world are known to spin at Neptune’s and the party rages on from Noon until 8pm. There is a huge deck with plenty of room for dancing and there are also private cabanas available for those who prefer things a bit more confidential. If one does not get their fill of Neptune’s during the day or chose instead to lounge at the beach past 8PM, don’t worry, because Neptune’s turns into The Drift Inn by night. Same deck dance floor but by night time, people are busting a move under the starry summer skies next to the Atlantic Ocean. The key difference between Neptune’s and Drift is the dress code, which for the latter is a bit more upscale, so keep that in mind and dress to impress. 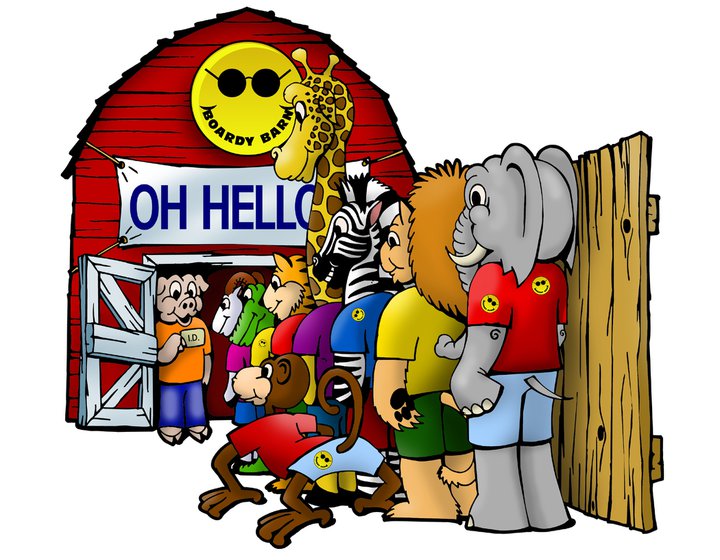 “Though a popular getaway destination for a significant portion of the year, the Hamptons biggest dates are those in its “opening weekend,” around Memorial Day. This is the weekend when people from both eastern and western Long Island come together to usher in the craziest, most extravagant introduction to summer.”

The day before we all head back to work is “Sunday Funday” in the Hamptons –especially so at the Boardy Barn, which is located at 270 West Montauk Highway in Hampton Bays. During a typical Sunday, the Boardy Barn is only open from 4pm-8pm. Memorial Day weekend, is a whole different story. Sunday May 26th, the Boardy Barn will be open from noon to 8pm. Be sure to get there early because the line to get in can become quite long, quite fast. The Barn is commonly known as the “Happiest Place On Earth.” This seems to be a true statement by the sight of smiley face stickers stuck all over smiling people. Resident DJ, Doug O’Mara plays classic 80’s and 90’s sing-a-long songs such as “Sweet Caroline,” “Living on a Prayer,” and “Build Me Up Buttercup.”

Monday, Memorial Day, beings the epic weekend to an end and are usually a good day to sit back on the beach, relax, and nurse any leftover grogginess from the weekend. Even if the parties have quieted down, the Hamptons own natural beauty makes for just as good a backdrop to have a good time. This coming Monday being Memorial Day itself, the serenity of the Hampton Bays without the bars and without the flash is just the place for reflecting on the lives of those who have served in the armed forces of these United States. Slowing down for the one day is hardly a loss of time, as Memorial Day weekend is only the beginning of the vast, fun-filled weekends of summer in the Hamptons.

The bartenders have rolls of their signature yellow smiley face stickers that they will give you to give out to others. Dress code for the Barn is pretty much anything goes. The only serious advice about style of attire to offer: Don’t wear any type of shirt in neon orange because that is the color of shirt the bouncers wear. Other than that, just consider wearing clothes that will not be ruined should they get wet and shoes that are okay for getting dirty. Be warned, you will get wet not necessarily with water but with the almost constant splash of beer from people dancing with drinks. Instead of getting angry though, just grab a beer and be happy. That is why the Boardy Barn is truly the “Happiest Place on Earth.”