As a sports fan, I miss baseball. Well actually, I miss avoiding baseball while checking in nightly to get scores and highlights- but whatever. More than following baseball I enjoy talking baseball. I love the endless nonsense of which player is better. I just love that. Since we don’t have baseball to watch, I decided to create a list.

I started watching baseball in the mid 80s and really got into it after I stopped playing in 9th grade (’93 ish.) In my 30 years of watching I wanted to come up with my own player player by position. I combined the Mets and Yankees of this era and compared to the rest of the league. I added 1 right handed starter, 1 left handed starter and closer. This is not a “if I was a GM starting a team”question, rather this is a “I’m in Game 7, give me my best lineup” scenario. Let’s see where it goes. 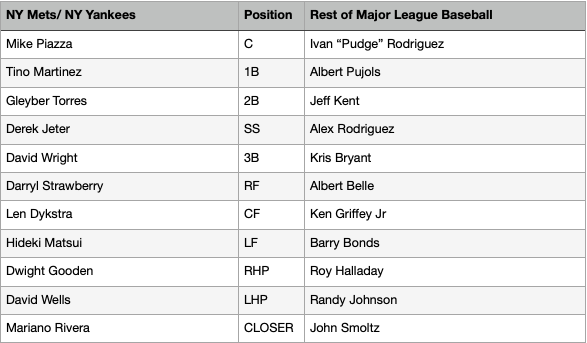 Reasoning
C- I think most of would agree with the catcher’s position. Gary Carter retired in 1992 and by the time I saw him he was an older player. Posada was good but he wasn’t Piazza. 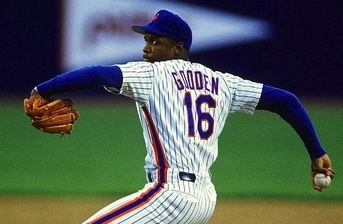 1B- Mattingly and Hernandez were at the end of their careers when I started watching. Both had dominants ’80 and I wasn’t watching then. Yes Giambi was good, Mo Vaughn was ok, Teixerra was good, but I love slick fielding clutch players, and I think Tino wins that case. Besides he has incredibly big shoes to fill. Pujols is a living legend… I only wished he stayed in St. Louis
2B- I know Torres is young but he has proven to be a stud. He may shift to Shortstop but for the time being he is a second baseman. He’s leaps and bound better than Kas Matsui, Jose Valentin, Luis Castillo, and Chuck Knoblauch. I know Jeff Kent didn’t do much with the Mets, but he was unstoppable in San Francisco and Toronto.

SS- I’m not a big fan of Jeter. I personally thin he’s overrated. If you put Jeter on Cincinnati they may win a few more games but wouldn’t be in contention. However by default it’s gotta be Jeter. Who are my alternates? Andy Stankiewicz? Rey Ordonez? On the other does anyone disagree with A Rod… steroids and personality aside?
3B- David Wright wins by default. I couldn’t think of a better third third baseman in New York in this time frame. Brosius no. A Rod was a better SS than 3B. Andujar has only 1 season under his belt. Third base is tough. It’s not a position that jumps off the page. My National pick is Kris Bryant. I think it’s solid pick.
RF- I struggled over this. I narrowed down to Darryl, O’Neill and Judge. Darryl has a soft spot in my heart. I loved Strawberry. I miss the Da——rryl chants. If you wanted to debate O’Neill or Judge I can’t disagree but Strawberry gets the nod. On the Flip side was there a better slugger than Albert Belle in his playing day? I doubt it. It’s a shame he doesn’t get HOF votes. 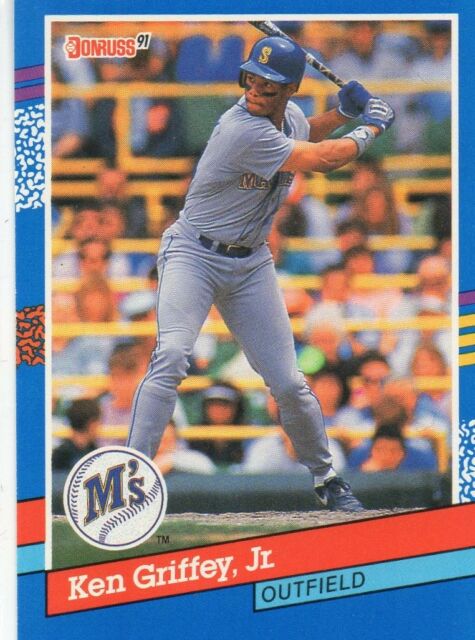 CF- Again soft spot. It turns out Dykstra wasn’t a good guy but nails was awesome. Bernie Williams arm was made of jello, Hicks is constantly hurt. Lenny was a personality. Griffey. On the other hand, may have been the best player of his era.
LF- It’s rare that the hype is real. It was with Matsui. Hands down in my opinion it’s Matsui. Can anyone disagree with bonds as the national guy?
RHP- Did it get any better than the Doc? Both Doc K and Doc Halladay, were the best at their trades for period of time. When they were on their were flat out dominate.
LHP- Wells is definitely a nostalgia pick. The working man’s pitcher. Give him the ball and walk away. The Unit was dominate…. Just not as a yankee. Johnson is my national pick.
Closer- it’s Mariano without a doubt. I needed to pick a national guy so I slotted in Smoltz but he’s no Mo.

Winner of NY v. Everybody ——-> Everybody in 7 with extra innings.