If you’re craving escapism through your usual fiction novel or fantasy film, look no further than Aunt Ange for an opportunity to satisfy that urge through music. Since its original two members released Fliptop Circus in 2002. Aunt Ange has been a band known for their concept album. The addition of a bassist and two multi-instrumentalists, Aunt Ange has been able to create unique performances with a cinematic approach that lures in the listener on a deeper level than most artists.

Perhaps your decision on how to begin listening to the latest Aunt Ange album can be determined by whether you’d rather watch a music video or listen to music and create your own visuals in your imagination. Aunt Ange offers a vivid and enticing storyline for Olga Walks Away (available for FREE streaming!); however, you may choose to listen to the album once through before reading the following description (SPOILER ALERT – skip the next paragraph if you’re choosing imagination over suggested visualization): 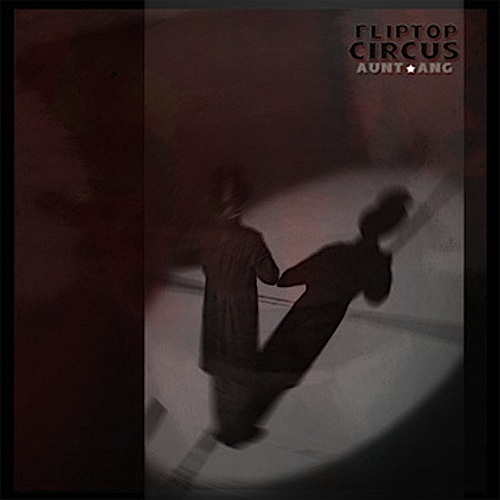 “Against the cold, blistering marshmallow snow, Olga sets off on a seemingly enchanting journey. Yet true horror greets her every step. Through vanilla pudding rivers, cinnamon winds, and candy cane fields, she must avoid temptation at all costs in order to become whole once more. Along the way, Olga finds herself face to face with beings of a different sort, the likes of which she has never seen. So sit back, relax, and join Olga as she learns to truly walk away.”

I read the album description after listening to the album, which gave me the chills of Danny Elfman’s soundtracks and the relaxing charm of ballads by Muse or Radiohead. The timbre of each instrument used is delicately laced together and each sound effect is highlighted, as though certain instruments would represent each character the way they do in Prokofiev’s Peter and the Wolf.

While reviewing this album, I noticed that I wasn’t using one-word adjectives to describe each track, such as, “soothing,” or, “catchy.” Each composition struck a chord with my creative process as I anticipated the next turn the music would take. Furthermore, this album doesn’t have a “hit,” but perhaps that’s because the whole album will become one when listened to straight through.

“Black Funeral Dress” opens the album. Upbeat percussive hits are interrupted with an eerie feeling created by a toy piano. The Nightmare Before Christmas comes to mind… icy cold with a childlike flavor. Trills on the toy piano add a unique timbre.

Track 2, “House of Bones” reminded me of Cirque du Soleil’s soundtrack. Suspense is created with string tremolos and screeching sound effects. A melodic passage is interrupted by the screeches, which come to a halt in time for Track 3, “To the Sun and Die.” This track features the first vocals and lyrics, as well as a transition into a true rock genre. Snapping and whispers are used to take the energy level back down to the listener’s original longing for more. Listen closely… where will this take us now?

“Pumpkins and Patches” uses a baritone saxophone ostinato to layer upon the percussion groove that was established earlier in the album. The lyrics make me think of the inspiration that might be found in Willy Wonka’s Chocolate Factory: “Indulge, taste the world, close your eyes, feel alive.” Make that Hansel and Gretel with the next verse: “The stepping stones are pumpkin pies and the grass is made of candy canes.”

“[Olga Walks Away] gave me the chills of Danny Elfman’s soundtracks and the relaxing charm of ballads by Muse or Radiohead. The timbre of each instrument used is delicately laced together and each sound effect is highlighted, as though certain instruments would represent each character…”

The fairytale experience becomes intense with the slow rock ballad of “Crucify the Blackbird,” Track 5. While the lyrics still continue to satiate your sweet tooth with the discussion of baked goods, the butter turns into butterflies and the plot intensifies in a minor key. “Happy birthday pills and chemical overkill,” takes over the cupcakes and sugar-sweet celebration. “Light the candles green… money, money, please,” the lyrics dig down deeper into materialism and greed.

Track 6, “Lady by the Window,” opens a capella and slows things down a bit more. The eerie screeches return, accompanied by the full band and backing vocals. The next track, “Monks,” will catch your ear for its variety and heartfelt lyrics alone. The toy piano returns with the strings and percussion section before transitioning into a marching band-esque polka, complete with accordion and group vocals.

Track 8, “Circles,” begins with yelling and turns into an incredibly lively show tune with electric guitar riffs and beautifully harmonized backup vocals to the repeated lyric: “I’m talkin’ in circles again.” Track 9, “Down the Rabbit Hole,” uses a sitar to add yet another element to the plot that keeps thickening.

“King of the Damned,” Track 10, uses the accordion and return of the polka-style accompaniment to the lyrics, with the addition of a fanfare. The toy piano plays repeated minor scales and the rich texture creates a creepy element before returning into hard rock featuring the return of the bari sax.

The title track, “Olga Walks Away,” uses harsh vocals broken up by lullaby-like vocal melodies: “Get me out of this place,” and, “My, it’s cold out here,” are sung in a different voice than the vocals. Charlie Tree and Olga are both introduced with two separate voices, turning a musical composition into a fully theatrical experience. Track 12, “Butternut Sunshine,” opens with a piano bass line that is built upon with vocals, the toy piano, and percussive sounds similar to clanking metal. I am partial to this track on the album because of its rock drive a minute or two in; its energy and variety are commendable and alluring.

The last track on the album, “Velvet Sidewalks,” took me by surprise. A folk-like acoustic waltz features a singsong voice with children’s story morals: “Don’t step on pretty flowers, ‘cause one of them could be you.” The album is tied together halfway through the track, when the eerie sounding strings and full band return.

Olga Walks Away is rich with variety and dripping with both emotion and suspense. I highly recommend treating this album as an event, rather than using it as background music for your shift at the office. Listen to this album when you are truly in the mood to listen. Brew your favorite cup of tea or burn some incense as you close your eyes and do nothing more than listen. Whether or not you enjoy the album, I encourage you to practice this art of listening. Remember that listening can be an experience rather than a task when treated with priority.

You can keep up with Aunt Ange’s latest music and news through these channels:

The cover image used for this story is credited to Aunt Ange’s official website.