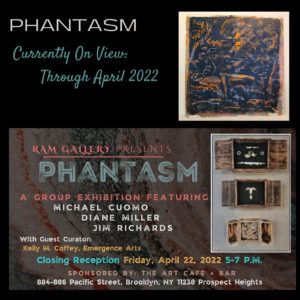 “What is truth? What is fantasy? How does the line between them blur in visions, revelations, and flights of fancy? Such eruptive events supplant the real with the sur-real, not in the sense of hallucination, but of that which sur-vives and supersedes the familiar, revealing an essence that haunts it. The pieces gathered in Phantasm use a range of media to invite the viewer to consider the presences and energies that lurk within such everyday views as landscapes, household objects, and domesticity, as well as the forces manifest in the alternating tempos of natural and human time.

Michael Cuomo’s series of paintings uses combative mark-making and deliberate color palettes to conjure visions of cosmic spaces and elemental forces. The series was first displayed in the NYC subway for the 2011 Insta Fame Phantom Art exhibition, in which subway ads were momentarily displaced by works of art. The ephemerality and momentum of both the subway transit system, and the cosmic events manifest in the artwork, evoke the energetic genealogy of natural history, and the instantaneous evolution of form from matter. Each painting begins with a color choice, conceived as a departure–or a kinetic fission–from the previous item in the series. This provides a meditation on the evolution of the artwork through the triangulation of artist–medium–idea, where the artist himself appears as a participant in Nature’s process.

Diane Miller’s works feature papermaking and collage, layering exquisitely fine prints produced through several techniques upon her own, handmade paper. Her pieces exhibited for Phantasm display landscapes and natural scenes, as well as monadic lyric meditations, or haikus, on the rhythms, dramas, and forces of the natural world, so ignored by technological society. The 44-inch “Waterfall Screen” suggests the frigidity and power of a cascade, touched only incidentally by the warmth of a muted color spectrum, yet broiling with agitation, free fall, and a rootlike connectivity. “Water Between Cliffs,” on the other hand, presents a repressed conflict between water and earth, the latter accentuated in its geometric rigidity against the river’s scintillating, metallic sheen. Both elements appear within the complexity of their own elective affinities, such that the inter-elemental friction is balanced by an intra-elemental compounding, fusion, and evolution.

Jim Richards’ sculptures deploy small cabinets as portals into the visionary and transfiguring possibilities of focus and exposure, in which household objects are transformed into creatures of light. Nails and razor blades gain their very ethereality from the edges that, in everyday experience, lend them their violence–a paradoxical logic that recurs in Richards’ mixed-media sculpture featuring a dilapidated car reclaimed by nature: the inexorable progress of the forest refuses yet to undermine nature’s vulnerability. A final meditation on domestic time appears in the two, burnt-wood frame sculptures using handmade Abaca paper and Basmati rice, which Richards gathered over the course of 30 years. “Ancient House” and “Thought-Dream Map” suggest the workings of an intergenerational unconscious, manifested through the incremental process of manual arrangements.

Phantasm suggests a need to pause before the moments of transient intensity that nature crystallizes and dissolves. It is a free exhibition at the Rebate Albertsen-Marton Gallery on 884 Pacific Street, sponsored by Art Cafe+Bar guest curator Kelly M. Coffey from Emergence Arts. It runs from February 18 to mid-April, at the changing of the seasons.”