You are at:Home»Art & Music»Red Jumpsuit Apparatus revolves its Revolution show around fans!
By: Brittany Montage Kelly on April 24, 2013 Art & Music

Over the past 10 years, the music of rock band, Red Jumpsuit Apparatus has evoked emotion, along with capturing a generation. Thursday, April 18ththe band did just that, when they preformed for a second time at Revolution in Amityville, NY. The band recently released a new EP, “Et tu, Brute?,” which launched last month on March 15th.

“Seventeen is just a test and I recommend that you live with no regrets.” tweeted fan, @taylormick2015, that night, “Just downloaded most of the Madden ’07 soundtrack bringing back puberty memories,”hashtag, (#) Red Jumpsuit Apparatus, tweeted another fan.

While on stage, and after the show, the band’s lead front man Ronnie Winter expressed his feelings on the band reaching their 10 year anniversary. “We’ve been through a lot of changes over the years,”said Winter, “I’m just thankful for the fans and getting the chance to grow closer to this kid right here.” 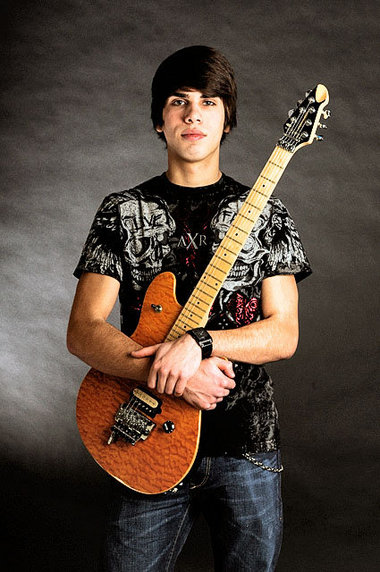 Winter was referring to bandmate and lead guitarist, Josh Burke, (pictured above.) Burke joined the band just three years ago and unlike his band mates who are from Florida, Burke is from Syracuse, NY. He had been a fan of the band and knew how to play all their songs before joining. Winter said, through touring and spending time together the two have grown closer than they have ever been.

“[Red Jumpsuit Apparatus] has been through a lot of changes over the years…I’m just thankful for the fans and getting the chance to grow closer to this kid right here.”

Throughout the last few years the band has shuffled around members and been signed to Virgin Records. Now independent, the band plans to continue making songs for all the loyal fans that have followed their journey to success.

The Red Jumpsuit Apparatus formed in 2003. Through the help of MySpace, the band began advertising their music and performing at local shows. When asked if he believes social media is responsible for, or contributes to, the success of the band, Winter expressed disagreement:“I don’t think it is responsible for the success of the band,” he said, “but it definitely helps, and allows us to stay connected to the fans.”

Perhaps what is most unique about the band is how they decided on a name for themselves. The band name, ‘Red Jumpsuit Apparatus’, was chosen by the band voting for random words they threw on a wall. In 2006, they released their first LP, Don’t You Fake It, with the single “Face Down,” which still remains a fan favorite.

“Do you feel like a man when you push her around? Do you feel better now?” Lyrics from the song “Face Down,” tweeted by Jeremy Gressley, known on Twitter as @Jgres95, accompanied the characters with hashtags for the words “vintage” and of course, “Red Jumpsuit Apparatus.”

The next stop on tour for the band is Plant Trog Entertainment Complex in Allentown, PA.

For the latest music, tour dates, merchandise and to follow the band on twitter, fans can visit the official Red Jumpsuit Apparatus website. Watch the video to the left for an LIB Magazine exclusive interview between Brittany, Josh Burke and Ronnie Winter of the band. All photos and video are credited to Anthony Parris. You can find Anthony on Twitter @SirrAP_the_DoN.