58,680 people cannot be wrong. Renzo Rivadeneira‘s, Instagram followers of nearly 60,000 are an eclectic, colorful, passionate and loyal group. I had the opportunity to meet the man behind the pencil. My impression of Mr. Rivadeneira, known simply as Renzo, can be summed up with one word: “Wow!”

Who is Renzo and why does he have so many fans on the web? Read on to find out!

Forget the hoopla of Midtown Comics, this 35 year old Peruvian artist is hosting a gallery session at Heroes Hideout in the Toy Tokyo Underground Gallery in New York’s East Village. The East Village is one of the most diverse a communities in New York. It boasts a vibrant nightlife and is artistically sensible. Only the section of New York that brought us the CBGB club can exhibit such a fascinating display of visual art.

The night of our encounter with Renzo was a special Grand Opening before a week long public exhibition of his eye-catching sketch work. The normally unassuming and average building basement of Toy Tokyo Underground was alive with anticipation for the event. The egg shell color of the walls were adorned with pictures of X-Men, musicians like Deadmau5 and other pop-culture and comic inspired drawings. The space was lined with a combination of students from New York University, freelance artists and of course, fans of Renzo and his artistic stylings. The fans, while clutching their dark merlots and amber colored Modelos, discussed art, life and work while some people showed off their art knowledge to impress the opposite sex. A truly sociable and energetic crowd. 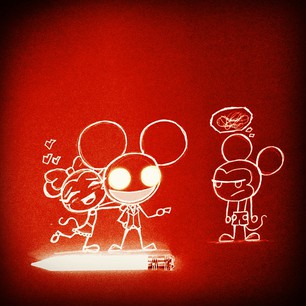 "I have bigger ears!"
Artwork credited to Renzo

There were close to 200 hand drawn pictures on the walls. Renzo uses a blend of canvas and photo paper to make his magic. My personal favorite, without a doubt, was a a piece featuring Deadmau5 titled, “I have bigger ears.”

The piece portrayed Deadmau5, a musician known for donning a very large, grinning mouse head at all his shows, in full stage gear getting hugged by Minnie Mouse while a dejected Mickey stewed in the background. The image is a great play on the hedonistic rave scene and the family-oriented Disney empire. A second standout piece was a humor based work featuring Starbucks, titled, “Coffee Refill,” depicting the caricature of a man holding a coffee cup with a drip of coffee running into it. I think we can all agree that has happened to us at least once!

“The normally unassuming and average building basement of Toy Tokyo Underground was alive with anticipation for the event.”

Aside from Renzo’s variety of puns and symbolic scenes, his work with perspective (an art technique that creates three-dimensionality in an otherwise two dimensional space,) is also outstanding! One piece in particular that emphasizes this skill is entitled, “I have no fear of failure” and is simply incredible. The photo contains a hooded hero standing proud with an archer’s bow and a pencil as the arrow. The pencil just jumps off the page!

When it comes to the history behind Renzo himself, the innovative image maker has been drawing since the ripe old age of 10! He started professionally as a graphic designer in Peru. He is an architect for P&L Global Network. P&L Global Network is an agency that is part of the South American division of “DreamWorks Animation.” Renzo is also the brainchild behind 2bheroes.com. To describe Renzo is to describe a man who is not only successful but also driven and most importantly, talented.

If you are in New York City and around the East Village, Renzo’s work will be displayed at the gallery until May 5th between the hours of 2PM to 7PM. The gallery is located at 91 Second Ave, between East 6th St and East 7th St. It is easily accessible by the L line on 14th St, the 6 line at Astor Place, the N and R at 8th St NYU, the F line at E. Houston or the M15 bus line that stops directly out front of the venue. If distance is an issue, there is no need to fret! Renzo’s works and discussion thereof can also be viewed 24/7 via his Facebook, Twitter and of course, his Instagram.

You can check out more pictures from the Grand Opening event on our Facebook Page!