You are at:Home»Art & Music»Rocking Out With This Century!
By: Jenn Curtis Kelly on July 8, 2013 Art & Music

If you love pop/rock, then you should definitely check out the sounds of Phoenix, Arizona-based band This Century! They’ve been together since 2007 and have been wowing the crowds with their rockin’ shows and amazing tunes ever since the very beginning. During the past year they have been gaining popularity at a rapid pace, and one of their accomplishments was having their song ‘Bleach Blonde’ featured on the play list for the clothing company Hollister. This Century is currently on the 8123 tour as one of the opening acts and they are playing alongside bands such as Brighten, A Rocket to the Moon and their old friends the Maine, whom they toured with back in 2009.

LIB Magazine was fortunate enough to have the opportunity to sit down with Joel Kanitz and Alex Silverman from This Century right before their July 3 show at the Theatre of the Living Arts in Philadelphia, PA to discuss their new album, married life, and much more! Read on to get a peek into the minds of two of today’s most talented up-and-coming musicians. 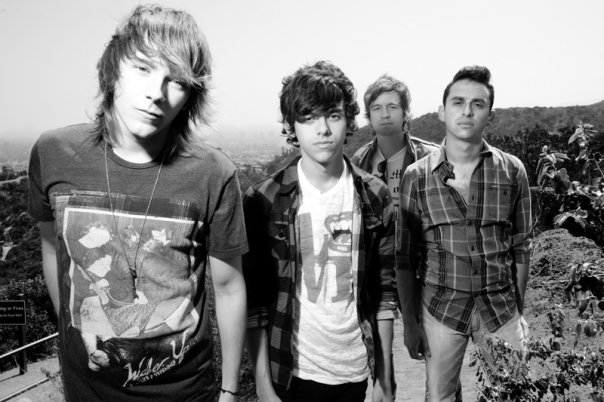 LIB: How has your sound changed since your first tour with the Maine?

Kanitz: Since our first tour with the Maine, I would say that our sound was probably a bit more rock, but we’re never good at throwing our band’s genre into a box. In the beginning, we didn’t know what we were supposed to sound like as a band, but now I’d say it definitely has changed quite a bit and more towards where we’d like to be as musicians.

LIB: What inspired you to go towards that new sound?

Silverman: Personally, I think we kind of just evolved—not only with age, but also in terms of writing and listening to newer music too. As a band, we started listening to a bunch of pop music. However, we not only listened to the artists of today, but we also listened to a lot of Michael Jackson’s work as well. We got into the hooks of that and the rhythmic stuff that goes in the songs. We all just love that aspect of pop music and it’s kind of what we were aiming for with the new tunes.

LIB: What was it like producing ‘Biography of Heartbreak?’

Kanitz: Very different, especially given the amount of time that we had on our hands. With ‘Sound of Fire’, we were on a record label and it was scheduled– you’d come out, stay at a place, and then it’s crunch time. It was basically like ‘here’s your studio, here’s your producer, and let’s get this thing made!’ You basically get two months and you have to have a record ready to go. With this album we were independent, so it was more like we were just kind of writing after ‘Sound of Fire’ had been out for a while. Colby Wedgeworth, who is actually on our managing team, has a recording studio that he generously allowed us to use, so we ended up going at three separate times.

I personally feel that going in at different times played to the benefit of the record because we’d write like six songs and go and record it; and then write six more and go and record them too. It was a very laid back process and we had a lot of time to think about which songs would be on the album. We had time to be picky, you know? ‘Sound of Fire’ is a great record but I don’t think we had that advantage.

LIB: How have your fans reacted to ‘Biography of Heartbreak?’

Kanitz: I will be honest; I wasn’t sure how they were going to react at first. It was quite a big change but I think that in the end the fans see that this is where we are happiest and this is the band we’re supposed to be. I’d like to think that they’re just relieved that we’re still making music.

LIB: As a band, what are your plans for the future?


Silverman: We have a lot in store for the future such as touring both nationally and internationally. Plus writing new songs, of course!

Kanitz: More writing, really. We’ve been hidden away making this record and now that it is finally out, we just want to go on tour to support it and get the music out there.

Silverman: It’s like a baby, you know? You nurture your child by feeding them and watching them grow up; and that’s exactly what we’re doing with our new album.

LIB: Speaking of the future, are there any interesting plans for the members of your fan club?

Kanitz: We always try to do cool exclusive stuff for the fan club members and I’d like to think that we have some awesome ideas up our sleeves in the future for them. We like to treat our fans like they are family because they’re the ones keeping us going. They let us keep doing what we love, so we owe everything to them.

LIB: Let’s talk about your international fans–how is it going overseas in terms of the language barrier?

Silverman: With regards to the language situation, if we go somewhere like the Philippines, we’re usually with someone who speaks both languages. However, I’ve heard in some countries it’s really hard. For example, when we were in Italy during the European tour, it’s like you go into an Italian café and think to yourself ‘I don’t understand a single word on this menu…um pizza?’

Kanitz: I would say that it was surprising people internationally do know English. It kind of makes you feel worse in a way, like ‘wow I’m lazy and I never learned any other languages.’ It’s so cool to see that these people know how to speak English as a second language. Fortunately, we’re musicians so our music can speak to anyone regardless of language!

“Since our first tour with the Maine, I would say that our sound was probably a bit more rock but we’re never good at throwing our band’s genre into a box. In the beginning, we didn’t know what we were supposed to sound like as a band, but now I’d say it definitely has changed quite a bit and more towards where we’d like to be as musicians.”

LIB: How do you decide what songs wind up on the set list?

Kanitz:  I think it was probably just what songs we could actually do because there are certain songs that just don’t translate well live. There’s only four of us up there so we do what we can. During the rehearsals we went through the songs and eliminated the ones that just didn’t seem to work well live.

Silverman: At this point we may still play around with the set list. Maybe add one song and take one out, that sort of thing.

Kanitz: We tried to keep the more well known songs such as ‘To Love and Back’ and ‘Sound of Fire,’ but we also like to try and play some of the new songs too.

LIB: Congratulations by the way Alex on your marriage; has it been difficult to balance your new life?

Silverman: Thank you very much! Hmmm… for me specifically it’s been pretty much the same as any other tour in the past. Relationships in general I think is one of the harder things with touring and it’s definitely the biggest obstacle for me. However if anything, it’s better now being married because it’s the next level of commitment that you don’t second-guess ever; especially when you know there’s someone that’s committed to you that’s at home. It doesn’t feel any different than usual, it’s just odd that I’ve only really seen her for three or four days so far and we’ve been married over a month now. However, my wife knew that was going to happen before we said ‘I do’ so it’s not a shock for her.

LIB: How does she handle it?

Kanitz: She’s great—you know you’ve found the one when they’re awesome and they understand our crazy schedules completely. Kudos to them; it’s not a normal thing to have a husband in a band that’s gone all the time.

LIB: Joel, if you’re in a similar boat, how’s it working out for you?

Silverman: It is probably a lot harder for them than it is for us, knowing that your significant other is going out in front of  tons of screaming girls. I honestly have a lot of respect for them because it can be so easy to stress out about the girls who are throwing themselves at their husband’s or boyfriend’s feet, but they are strong women and make it work.

LIB: When you guys come to Long Island, what are your favorite things to do?

Silverman: Get food and see friends.

Kanitz: Reminiscing! No, I’m just kidding because I have never lived in Long Island. I do like to hear stories from when Sean and Alex lived there though.  Apparently there’s this one family there that they’re pretty much related to.

Silverman: They are family though!

Kanitz: They’re related to them without actually being related to them. I do like to hang with them because it’s cool to see where Sean and Alex came from. Besides, everyone knows that you can only get authentic bagels from New York!

LIB: Joel Kanitz and Alex Silverman, thank you for letting us interview you. We hope you enjoy the show and the rest of the tour too!

If you would like to learn more about This Century and sample their music, be sure to follow them on both Twitter and Facebook. Also, if you like their sound, be sure to get tickets the next time they’re in New York and let them know that LIB Magazine sent you!