You are at:Home»Art & Music»Singer Amanda Kravat Steps Outside Herself – LIB Artist of the Week
By: Kelly on February 26, 2015 Art & Music

Amanda Kravat is a lyrical powerhouse with the ability to touch nearly anyone’s heart through her music. Described as “deep”and “rocker chick”, Kravat has used her impressive talents to create songs inspired by her compassion for the abused, as well as her own angst brought on by tragedy. Amanda, a New York native, has channeled the power to unify a world of audiences through songs that have earned her immense critical acclaim and top spots on Itunes EP and Amazon music charts. Hitting it off with Steven Tyler doesn’t hurt an artist, either.

What inspired you to become a singer and songwriter?

I became a singer/songwriter/musician/whatever people call me, because I started out as one. I grew up always making music. Singing songs, or plucking at an instrument. Mom sang to us all the time. She would make up little ditties on the spot, about drying off our toesies or eating all our peas. She is funny and quite musical. It runs on both sides of my family. I always envied the other kids who were growing up uncertain of what or who they would become as adults. But I always knew what I wanted to do, I couldn’t help it. Couldn’t wait to get out there and do my thing!

Since you are originally from NYC, did you feel at an advantage compared to those who migrate to big cities in hopes of fame?

Growing up in New York City I was really lucky to have access to all kinds of different music. And access to amazing musicians and great places to play. Really quite an advantage.

How did you end up collaborating with Aerosmith? I must ask, is Mr. Tyler as animated and ready to belt out tunes offstage as he appears during concerts?!

I met Steven Tyler through a friend, and while I was waiting for a session to end at my first love, Avatar Studios (nee Power Station) I was strumming and singing a new song I had just written. And Steven popped out and started singing a phenomenal (and impossible) harmony and that was that. The man is on fire, all the time. He embodies music. He never stops singing. I wouldn’t either, if I had his pipes!! 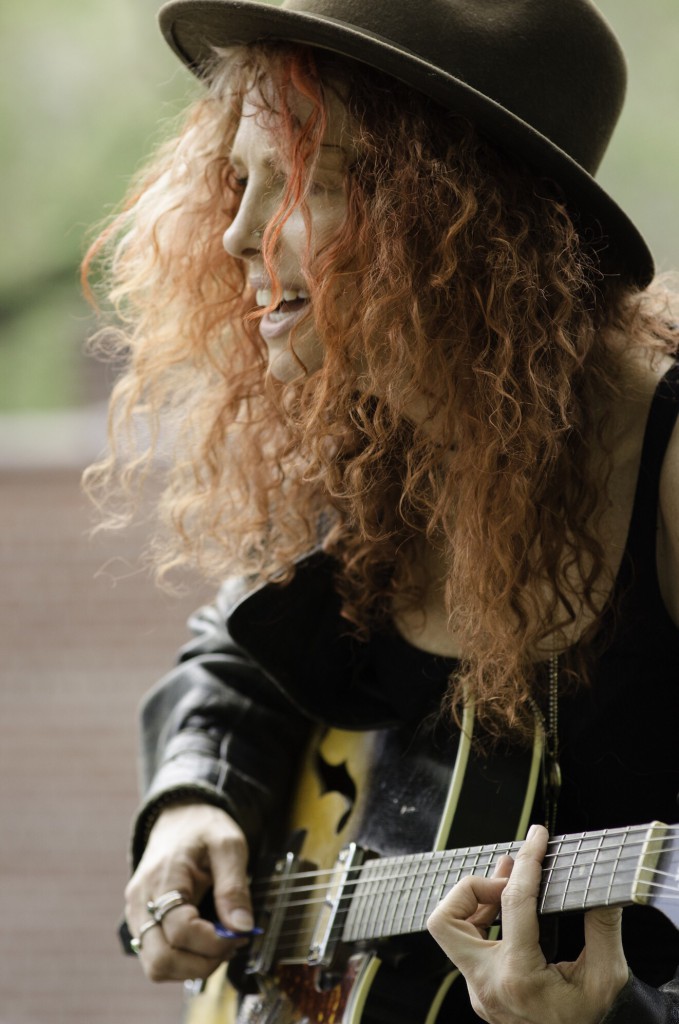 How do you feel about “YouTube artists” who often reach millions of people before ever actually performing live – compared to more traditional ways of live bands and networking in person?

I think anyone who does anything creative deserves a pat on the back. Anything except people making art with the goal of becoming famous feels OK to me. That’s generally transparent and that kind of contribution to society, well, we can all live without it. That’s contributing to people’s shallow, selfish natures. We need to give to people and take care of each other, not just buy things and get attention. Back to the point tho, I happen to find “seasoned” musicians more interesting, I love seeing someone sparkle onstage as well as on record. But a great bit of music is great in any form. So if some 13-year old from Houston sings and posts a song on youtube and someone else gets to enjoy it, go get ‘em. The only thing that depresses me is that people aren’t really buying whole records (CDs) anymore. They just stream them. There’s something about plunking down cash and owning something that feels more righteous to me. Also I like hard copies, I love to hold the artwork and read the inside. But most people don’t bother even printing credits or “liner notes” anymore.

Who are the most influential persons you have met in music thusfar?

I met Paul McCartney and I worked with Steven Tyler and Aerosmith. Need I go further? Can we just say I’m absurdly lucky?

Are your songs written from personal experiences?

Yeah, ‘Not Myself Today’ was about my panic attacks. But sometimes I’ll read an article or meet someone that will inspire me, like an old single on mine, ‘21’. That one was about a kid who was abused by his mother. That wasn’t my story, but I tried to imagine what he felt like. I heard a whole song once, as an express roared past the 79th street station. Everything’s from personal experience. I try to step outside of my own little box, but I’m not too imaginative.

Lastly, what are your future plans (in music or otherwise)? Upcoming tour dates?

Looks like I’ll be doing a little touring in the Spring, but mostly I just want to keep writing and recording!