You are at:Home»#WeAreLIB»Tales of a Gallery Junkie
By: Kelly M. Coffey on August 25, 2019 #WeAreLIB, Art & Music, Storytelling, Travel and Leisure, vedheadPhotography 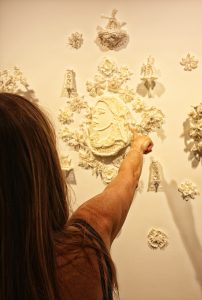 Galleries and museums have always been a great way for me to explore cities I visited and lived. When I moved to Salt Lake City, I attended their monthly city-wide gallery strolls with camera on hip and ready to hang with the local community where we responded as such to the ever changing art scene. When I moved back to New York City and offered a job at a publishing company in SoHo, it was accepted with the fullest intent to take advantage of exhibit openings (and sample sales! Restaurant openings! Movie premieres!) in the neighborhood. So many champagne toasts to new artists, so much schwanky schmoozings, so many drunken introspective moments.

There were celebrities shooting films and tv everywhere, I whispered I love yewwwww to Ted Allen while crossing Sixth Avenue and Michael Kors donated the money to build a beautiful, much needed functional space for God’s Love We Deliver, a non-profit organization committed to helping anybody seeking a nutritious meal.

There’s an electricity when people come together from all sorts of walks to merge in a small gallery and observe art (and each other). It’s basically like going to the zoo to observe feedings;  I love to believe there’s a very sacred element about bearing witness to people absorb artistic pieces and respond outwardly to messages they receive, whispers of a spiritual story told through color, shapes, and motion. Our response could be a flicker, a tickle, or a primal surge of our states. A simple scene could shake out something that’s been lodged in a tight spot, something tucked away, to present us with a few found puzzle pieces.

I never needed an excuse to go wander through galleries. Whenever I’m bored, I still dress up, dip in and out of the museums around the city, ask myself why life matters, and enjoy the meditative quality to tuning out everyday worries. Each gallery stroll becomes just that down Memory Lane. 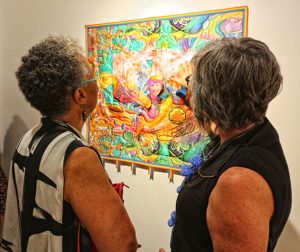 The places, the faces, the spaces. Oh my! Gallery exhibits, how you inspire me to live. You give me purpose and direction. An excuse to exchange ideas with the hope to learn and empower someone else. Some of the most remarkable exhibits I saw were back in the early 00’s when I lived in Westchester, moved to the Bronx, and spent all my daze working at The Strand to avoid “home”. Right before I moved to Salt Lake City, I became obsessed with Takashi Murakami, Jeff Koons, and Yoshitomo Nara and was fortunate to see their exhibits in NYC.

I spent endless days at ABC No Rio journaling my boring existential quarter life crisis sitting on that disgusting backyard couch. (Side note: EWWWWW.) When I wasn’t checking out what new art was splayed out somewhere around the property, I could be found in the darkroom on the third floor developing my own black and white film. Back then I was shooting with a Pentax K-1000 that had been loaned to me by an uninvited roommate who wound up just living on our couch for the year, but did not object when I kept it. 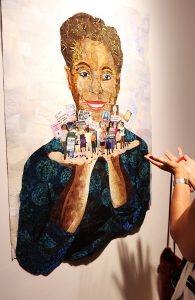 My sister Shannon and I caught Cindy Sherman’s Los Angeles exhibit Imitation of Life about three years ago completely by surprise and left inspired all over again as a female photographer. She’s best known for using herself as the subject in everything. She’s spooky and weird, unique and eccentric, brilliant and brave. A true heroine showing us her world – with all its good, bad, and utterly disgusting. Sherman is actually my sister’s role model, Shannon was always fascinated by the unusual and choose Sherman as the subject for a project while in college; that’s the first time I recall seeing any of her works. It was cool to fast forward nine years later to share our first impressions of our most captivating muse.

NYU’s Grey Art Gallery held a photographic exhibition of Allen Ginsberg, never before seen photographs, titled Beat Memories which weaved histories of the city’s most adventurous collective of thinkers, poets and writers unafraid to do anything outside the norm, challenge what and how we see society’s “normal” and bring some passion into the mundane existence of a hustle. The photographs were intriguing as they showed insight to their lives in the city half a century ago, kitchen creations, pajama poetry slams, drug trips and the result of what happens when a merry band of creatives come together to see what happens next.

There’s a special Salt Lake City memory of the Kayo Gallery where Helio Sequence played live. The duo rocked out on a wooden block the size of a standard pallet that was referred to as a “stage” which could barely fit the drumkit w/ drummer + lead singer + mic stand, but HOLYSHIT did they made it work. They played so many of my favorites and think it was a rotating crowd of ten people at any given moment.

Last summer Luisa and I made time to go gallery hopping in between our exhibits and the projects we took on – which for us seemed to come all of a sudden, out of nowhere. We scoped out artists I wound up interviewing for LIB and met some international folks with interesting life stories of how they made it big in NYC. We spent the summer discovering artists like Brian Kirhagis and familiarizing myself with organizations such as the SoHo Photo Gallery, 14×48, and Fractured Atlas. We walked the High Line where there was sculpture art at every turn, a pride dance party parade, and a very cute little bar at the end where we had too much water to drink and giggled too loud for other people’s taste, but didn’t give a shit. We were having fun. 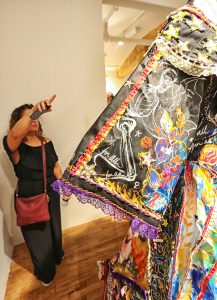 This year I made it to Chelsea for my summer gallery-hop-a-roo because one of many new friends – a welder, an artist, a sculptor – welded some of the pieces from the Richard Nona’s exhibit at the Fergus MaCaffrey Gallery. I was like W O W, pretty much in a constant state of HOLYSHITHEDIDTHIS while I was exploring the artwork. Thoughts of WHAT THE FUCK HAVE I DONE WITH MY LIFE came up as I became mesmerized both in the simple aesthetic of each individual piece as presented by the artist Nonas and intrigued with a newfound eye for where metal meets. It was the latter that led me to see such an extraordinary show in the first place and hopefully many more to come.

I don’t know what comes first, the inspiration to create or the creation to inspire, but don’t mind being caught in this perpetual downward spiral, so long as I’m not not creating, learning, expressing, and exploring what’s best of life.