You are at:Home»Art & Music»The Beat Goes On: An Interview With G-Love & Special Sauce
By: Amanda Ferris Kelly on July 11, 2013 Art & Music

In today’s cutthroat music industry, so many artists and bands try to become popular and fail. Although the indie music scene is becoming more popular, whether musicians opt to go solo or go the more traditional route by catching the eyes and ears of a record executive, it takes strength of will, determination, and  passion in order to truly make it big in the music industry.

Even if you do develop a following, life can often throw curveballs at you; for example, sometimes a band member that you’ve been friends with for a long time suddenly decides to leave the group. It’s never easy being a musician, and in order to be both successful and keep one’s sanity, you need to keep the passion for music alive in your heart as well as developing a rigorous work ethic.

No other band would know better about the dual balancing act of keeping a strong work ethic as a musician as well as making sure your passion for music doesn’t burn out than the Philadelphia-based band G-Love & Special Sauce.

The alternative hip-hop band, which was formed in Boston in 1993, is currently composed of Garrett ‘G-Love’ Dutton, Jeffrey Clemens, Timo Shanko, and Mark Boyce. While they have had their ‘ups’, such as having their ’94 single ‘Cold Beverage’ become a hit, watching their debut album nearly turn gold,  and  working as the house band for the Comedy Central show ‘Turn Ben Stein On’ for a while, they’ve also had their ‘downs’ as well. For example, they almost broke up after their disappointing second album due to a disagreement about the band’s finances and in 2008 their bassist Jimi ‘Jazz’ Prescott left the group.

However, despite their past trials and tribulations, G-Love’s fortunes are on the rise again. The band will be opening for the band 311at Jones Beach on July 13 and LIB Magazine recently had the opportunity to speak with Garret ‘G-Love’ Dutton himself about his thoughts on the band’s musical influences, what advice he would  give to up-and-coming musicians, and side projects that they are currently working on as well. 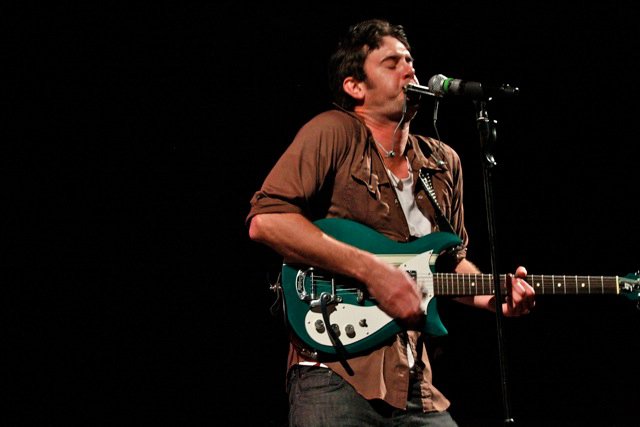 LIB: Where did you come up with your band’s name?

Dutton: When I was working as both a street musician and a coffeehouse player, I was heavily influenced by the old bluesmen and also hip-hop MCs as well. There have always been artists with stage names like Hound Dog Taylor, Muddy Waters, Q-Tip and KRS-1; however, my real name is Garrett Dutton but I wanted a stage name, so I started going by Crazy G and then later switched to G-Love. The Special Sauce was a name I always had in the back of my head for a band.

LIB: What drew you to the blues rock/alternative hip-hop music genre?

Dutton:  As a young singer-songwriter I was always searching for new sounds of solo performers who also played the harmonica. I started listening to blues legend John Hammond’s record, ‘Country Blues’ and the minute I played his song ‘Traveling Riverside Blues’ I was hooked on that style! I started  learning all about the music and the artists on the delta blues, and still enjoy reading about them to this day.

In terms of hip-hop, it was the music of my generation so I grew up listening to what was later dubbed ‘the Golden Age of Hip-Hop.’ The years from 1986-1996 were just banging! However, one night the two sounds collided while I was jamming on South Street in Philly and I found my style: the hip-hop blues.

“There’s always luck, timing, and inspiration involved but I really think you have to have a strong passion and work ethic in order to have staying power in the music industry. You really have to commit.”

LIB: What’s the writing process like for the songs? Is it usually one band member who writes it or does everyone have creative input?

Dutton: I generally write alone on my acoustic guitar and then bring a song to the band where it goes through an additional writing and tweaking process. If it is good enough, we take it to the stage and if it clicks there, we add it to our repertoire.

LIB: Who would you say is your top three musical influences?

Dutton:  I would say John Hammond, Bob Dylan and Rakim.

Dutton: I first played with 311 back in the day in 1994. We’ve all been friends ever since then and what happens backstage, stays backstage!

LIB: Which musician or band, living or dead, would you love to work or tour with?

Dutton:  I would love to work with Jimi Hendrix!

LIB: What advice would you give to young up-and-coming musicians who are struggling to carve out a name for themselves?

Dutton:  You have to constantly practice and hustle your business every day. It’s a lifelong pursuit so you have to really love it deep. There’s always luck, timing, and inspiration involved but I really think you have to have a strong passion and work ethic in order to have staying power in the music industry. You really have to commit.

LIB: Are any of the band members working on a side project at the moment? If so, what are they?

Dutton:  Timo Shanko and I have a side band called the Butter Band which performs around the Boston area on our time off. Timo is also in the Fully Celebrated Orchestra as well as a band called Dub Apocalypse. Jeff was the drummer on ABC’s ‘Nashville’ this past year too.

LIB: Garrett Dutton, thank you for taking the time out to speak with us and we hope that you have a good show on July 13!

If you would like to keep up-to-date with G-Love and the Special Sauce, please visit their official site or follow them on Facebook, Twitter, Pintrest, or Myspace. You can also join their official street team and help spread the word about their music as well.