You are at:Home»Sports»The Ducks slide into the second half
By: Steve Kalba on July 22, 2015 Sports

The LI Ducks had a historic run in the first half. Good enough for the second-best record in the Atlantic League, which could ultimately be rewarded with a playoff spot. As good as they were, the Ducks could not catch the Somerset Patriots, who clinched the Liberty Division. The Ducks enjoyed an amazing 17 game home winning streak until a loss to the aforementioned Somerset Patriots in the final series of the first half. The Ducks still took 2 out of 3 from them to finish off the first half. Seven lucky Ducks got an All-Star nod for the Atlantic League All Star Game held at Harbor Yard, home of the Bridgeport Bluefish. Can these Ducks continue their incredible run for the second half? They will have to do it without a few key members who left the ‘flock for other opportunities.’ While such signings “are good for the league,” according the manager Kevin Baez, its always tough to lose key guys who got you to where you were. Yet also gives others the chance “to step up,” and seize the opportunity to stand in for these guys.

We saw it coming. How could you not? Jannis is a talented knuckleballer work-duck who was leading the Atlantic League in ERA (1.18), strikeouts (67) Innings Pitched (83.2) and tied for 3rd in wins (6-2) who held opponents to a .182 Batting Average and had a 0.80 ERA in his last 8 starts was caught by the New York Mets, to whom he was signed July 1st. He was the quackpack’s best pitcher, and yours truly even mentioned to him that he was certain to draw the attention of an MLB team with his recent performance (Interview with Mickey Jannis.)

Andrew Barbarosa started the season with the Arizona Diamondbacks organization. At 6’8” he is a big lefty with great velocity who enjoyed some dominant starts while he was here is certain to draw attention. After being released by the Diamondbacks, he had waited for a few days to see if he would be signed by an MLB team so naturally, a bunch of standout starts which included two consecutive 10 Strikeout games on May 3 and June 5 certainly was enough. He was 4-1 with a 2.82 ERA 51 Innings pitched 59 Strikeouts and 6 of his 9 outings only allowed 1 earned runs or less, certainly caught the eye of some Braves on the prowl for a commodity that he certainly is. During the Atlantic League’s All Star Break, Barbarosa was indeed signed by them.

Lew Ford flies south of the Border for the Summer

What could be considered a major blow to the Ducks for at least a month, Lew Ford, flew the coop to Tijuana of the Mexican League. He was the Atlantic League leader in multiple offensive categories including Batting Average (.361) hits, and RBIs (58). Ford was the 2014 Atlantic League player of the Year and the leader of the pack this year. Ducks GM Michael Pfaff “remains confident” that he will return at some point later in August to return to the Quackpack in their final stretch of the second half. He was named bench coach after they signed Randy Ruiz, a former MLBer with the Twins (also Lew Ford’s former teammate) who was named hitting coach.

The remaining standouts who have yet to be signed, but certainly are candidates: 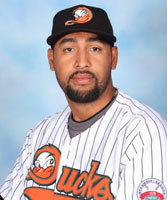 Amalio Diaz. The Ducks 8th inning guy has been nothing short of dominant. He, along with Reegie Corona, played for Navagantes del Magallanes of the Venezuelan Winter League and were practically recruited by Lew Ford. Both Reegie and Diaz contributed greatly to this club. 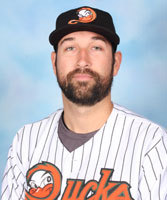 Ryan Kussmaul—Ducks closer leads the Atlantic league in saves. He was an All Star. Former White Sox farmhand, Kussmaul, saw the likes of Chris Sale and Avisail Garcia while in the minors and also was a 3 time all star during his stint. His fastball, whom former MLB third baseman and current Bluefish, Sean Burroughs proclaimed he “did not want to face.” Kussmaul is certainly appealing to other teams. 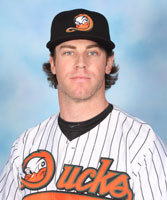 Bryan Sabatella—Former Seattle Mariners farmhand and Long Island product has also led in many offensive categories including SB is only 30 years old. Sabatella is the epitome of a catalysis. He is an on base machine and instrumental for the Ducks first half success. He’s a big guy with good speed and could be attractive. Sabatella was also one of the 7 LI Ducks honored t to be an all star. 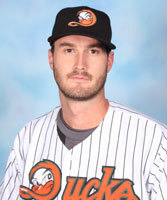 Jon Griffin—only 25 years old big guy with serious power, who came into his own after struggling the first few weeks of the season. Griffin also garnered an all star selection and had been working with Lew Ford on shortening his swing and has been success because of it. Griffin has enjoyed multiple hit games and certainly his big power bat and relative youth can help. Remember, he is the guy who had hit HRs in 5 consecutive at bats last year in the minors.

Make no mistake the Ducks are charging. I came into season expecting to see players develop and expected some sloppy baseball. I was wrong! The Atlantic League is a competitive league. Wins matter here! They are playing for a championship. That is the beauty here. Without any Major League affiliation their allegiance is not to the Yankees or Mets but it’s to their fans and their teammates.

This is going to be a fun second half!