You are at:Home»Nightlife»Yellowcard Brings Down the House During Their Concert At The Paramount
By: Lauren Jablonski Sample Account on February 12, 2013 Nightlife

“If you can wake up and say ‘good morning’ tomorrow, you probably did something wrong! Sing loud with us!” YELLOWCARD

The pop-punk band, who originally hailed from Jacksonville but now resides in Los Angeles, first played on Long Island in 2002 at the Backstreet Blues in Rockville Centre. They opened for The Starting Line and did their best to promote their then-latest album “One for the Kids”, which was released on the label Lobster Records. Despite venue setbacks such as overflowing toilets, the bands played on and their fans stayed put.The setbacks weren’t over though, however. That night, Yellowcard faced many technical issues during their set. Lead singer Ryan Key kept shocking his lip on the microphone so many times that he was forced to remove his sock and place it over the mic just so he could keep singing. Another setback occurred and the band was forced to borrow the drum kit from The Lawrence Arms, who was also on the concert lineup for that night. Yellowcard is no stranger to obstacles, though. The band faced many challenges on their way to stardom, which ranged from changes in personnel, violinist Sean Mackin’s fierce battle with thyroid cancer, a two-year hiatus, and Ryan Key’s vocal surgery.

Through all of the ups and downs, Yellowcard has proven time and time again that they have the drive and talent to keep releasing quality albums. They also acknowledge that yes, while they have the determination to keep going, most if not all of their success is due to their very dedicated fan base. “We have the best job in the world,” he said before adding “and it is because of you.” With memorable concert quotes like that, it’s easy to see that Yellowcard has remained humble despite their fame. They are also known for being a band who likes to help their label mates and friends gain exposure too. For example, Yellowcard chose Tay Jardine, who is the lead singer of the band We Are The In Crowd to be featured on their new single “Here I Am Alive” and even brought her out on stage to perform the song with them on Saturday. The album “Southern Air” also features other artists such as Cassadee Pope from The Voice and Alex Gaskarth of the hit band All Time Low.

Now, when Yellowcard takes the stage it’s easy to see they know exactly how to excite their fans. Mackin did his patented backflip during “Lights and Sounds” and he positively shined throughout his orchestral violin solos on Saturday night. Key also lived up to his last name by singing on pitch the entire show while their drummer Obi sat center stage and showed why he’s one of the best in the business. 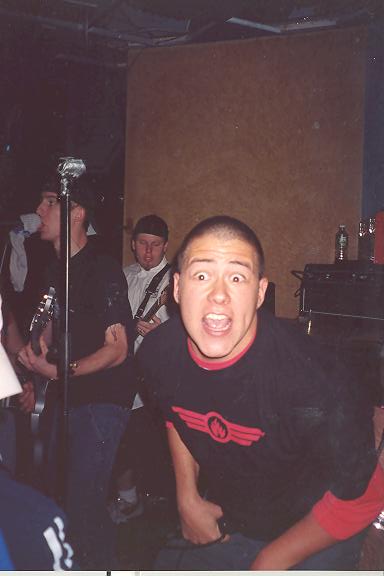 “It was so rad to lookout there and see everyone smiling and singing.” Ryan Key

During the concert, Key also gave Circle Pit 101 lessons to the pop-punkers who were new to the scene and encouraged long-time fans to make the concert even more fun. His exact words were: “I want to get the floor spinning in a circular motion. This isn’t a mosh pit, this is a circle pit!”

While that statement may have startled new concert goers who may be used to a typical mosh pit full of people who push and slam into one another while dancing. However, a circle pit is far safer because fans are running in one giant circular motion without making contact with each other. It’s a great way for the concert-goers to dance at the show without worrying about potential injuries from the pit. Yellowcard knows this too, especially since Key yelled out “Listen, the more insane you get out there, the better you make us look on television. That’s all I’m saying.

While the band was clearly longing to show off their wild side, they had to stay composed throughout the entire concert since the show was being broadcasted live. Key even joked about censoring themselves, saying: “We’re six songs in and we haven’t dropped one F-bomb yet. I’m proud of us.”

Despite the band having to restrain themselves, all the gloves were off for the fans. “If you can wake up and say ‘good morning’ tomorrow, you probably did something wrong! Sing loud with us!” yelled Key as he instructed the crowd to sing louder, which is a time-honored tradition for any Yellowcard show. The fans were especially loud when they ended the concert with their radio hit “Ocean Avenue.”

At the song’s end, Key thanked the crowd and told them “it was so rad to lookout there and see everyone smiling and singing.” However, if the fans were disappointed to see the show end, there’s still hope! Yellowcard hinted that they might be coming back to Long Island in the fall, so be sure to watch the calendar closely and make sure you purchase your tickets as soon as the dates are announced.