You are at:Home»Nightlife»The Beach House: A year-round oasis in Rockville Centre
By: John Milovcic Kelly on April 12, 2013 Nightlife

If I closed my eyes, for a brief moment…I could have fooled myself into thinking I was enjoying a summer Friday night in the Hamptons.”

The Beach House Restaurant in Rockville Centre, is, in actuality, miles away from any beach. Though this may initially seem ironic, if it can get a person in a happy mood and thinking about the beach, that’s still a plus, right? The Beach House was originally established in Long Beach but the company has opened this second location. The Beach House has become a staple to Rockville Center nightlife. Situated on a strip with standouts like Croxley’s Ale House and Churchill’s Restaurant and Bar, The Beach House can proudly hold a candle to all of them!

Do not be discouraged by the place’s “cookie cutter” décor. TV screens are spread throughout, just like any other active bar; the same rotation of NCAA basketball and NHL Hockey as everyone else. Common variety beers like Budweiser, Coors, Sam Adams and Guinness are typically what’s on tap. What makes The Beach House stand out is what comes from within its kitchen.

During this particular visit, myself and a friend ordered a very enjoyable plate of potato skins and a party platter of wings. We were provided with a satisfying serving of 36 wings and they came split flavored with sesame teriyaki, honey barbecue and a Cajun Dry Rub, which stood out as the most tasty and unique of the bunch. All of the wings had excellent crunch, were quite meaty and very full of flavor.

The Beach House was definitely a destination bar that night. Patrons ranged from mid-twenty-somethings to people in their early forties. There was a healthy 50/50 split between women and men. The waitstaff was professional and attentive. We noted a DJ’s booth located at the back of the restaurant. Once 10:30 hit, the resident DJ started playing a track by Lana Del Ray,“Summertime Sadness,”mixed with electronica group, Infected Mushroom –a personal favorite of mine. If I closed my eyes, for a brief moment, between the heating system blowing, the low bass tickling my toes and hearing the murmur of people romancing potential partners, I could have fooled myself into thinking I was enjoying a summer Friday night in the Hamptons. Very well done Beach House. 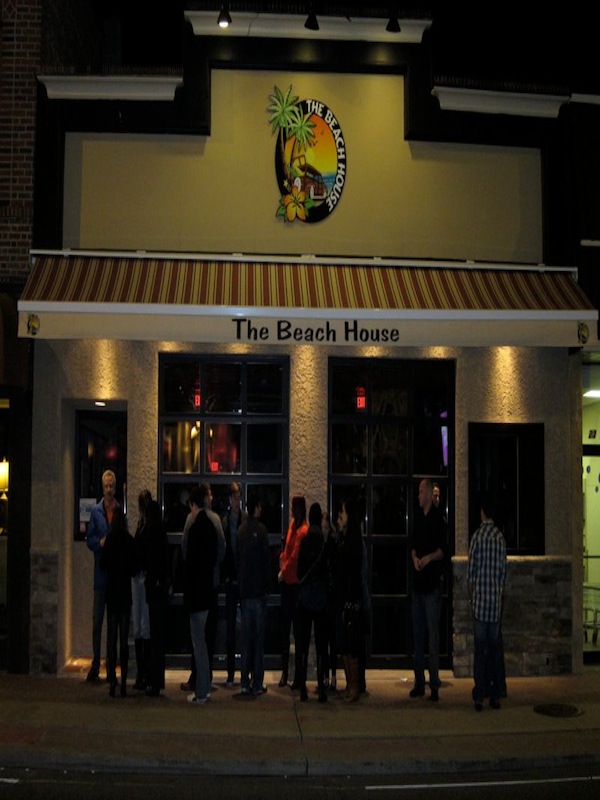 “The Beach House was definitely a destination bar that night.”

Rockville Center in general, is a tough place to find parking and this place is no different. Luckily The Rockville Center LIRR station is a block and half away. It is easily accessed via the Babylon Branch. We were advised there is never a cover charge. In addition to the music via DJ, the Beach House occasionally hosts local bands. There are specials on Mondays for beer and wings, as well as other nights that do rotate. Wings, potato skins and two draft beers did cost $55 dollars during that night but it was well worth it. I felt it had very good value. However, in my opinion, the name does not work for this place. Still, I suppose as the saying in Romeo and Juliet goes, “A rose by any other name would smell as sweet.” Perhaps just a small change from the ‘norm’ in sports bar décor and a craft beer selection would would have made my visit even better.